Shoes, a barcode and willpower are the only ingredients 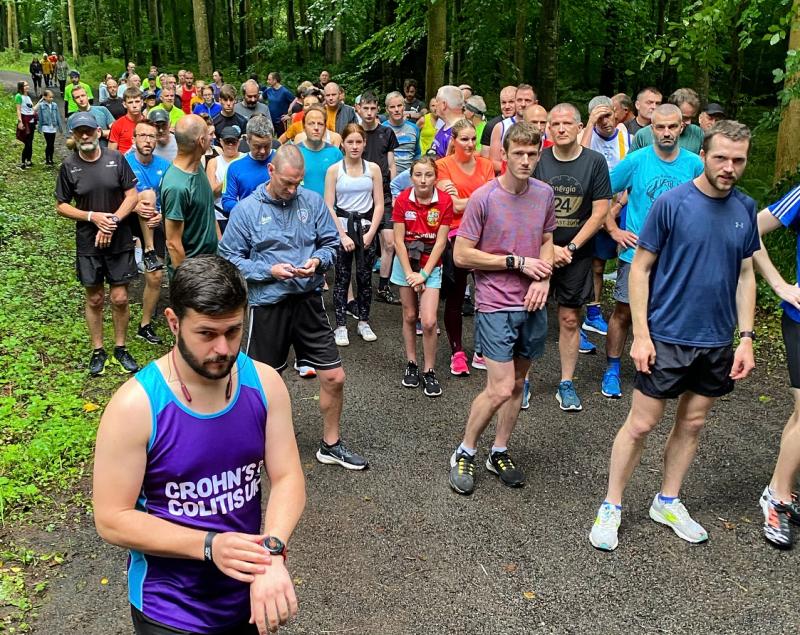 Runners at the start line on Saturday in Garvagh Forest.

When I joined the County Derry Post, I had never heard of Parkrun. But after Monday afternoons of assembling athletics data from clubs across the county, it doesn't take long to realise how deep rooted it is.

In every club, there are different levels of motivation and disciplines. The marathon runners, the ultra runners and those (not me) built for speed. Some dedicate their weekly schedule to improvement. Diet. Training. Speed work. Flexibility. And all with a fascination for numbers.

For others, it is a social scene and getting out in the great outdoors. Getting moving is their only currency.

Week on week, as the results drop into our inbox, Parkrun dominates everything. There isn't a club that doesn't have someone partaking.

It caters for all. From those using it as training for something else, to someone trotting along for a bit of stroll with a family making it their weekly exercise.

It rolls out at the same time every Saturday morning. It's free. All you need to do is sign up, print out a barcode, set your alarm, gobble down the breakfast, get yourself to the start line and away you go.

There is no requirement to be attached to any club and it's totally free. The only thing asked in return is for people to take their turn to volunteer for the organisation on a given Saturday.

There are no medals or regimented training gear. Just an opportunity to run in a range of colours, ages and fitness levels.

In any underage sporting blitz where the score isn't counted, the competitive young players will always know who is winning. That's built into the psyche. Parkrun is the same.
The barcode system generates your time and for those even semi-serious about running, this is their opponent. The number will be in the memory as you start the line the following Saturday. Everyone is human.

At the start of January this year, I started off on the #100DaysOfWalking. A walk or run every day, with at least 10,000 steps. Just because I wanted a regular routine of exercise and the stubborn part inside ensured I never missed a day.

From somewhere around the 50th day, I made an inner commitment to make it a life choice, #Move365. To walk/run at least 10,000 steps every day. Just as it says on the tin. It could be walking our daughter to the bus. Dandering to the shop for the paper, playing five-a-side soccer, or going for a run. Anything.

Why? Well, when you are big boned like me and used to tapping at a keyboard every day, getting exercise is vital for physical fitness and, more importantly, mental fitness. A challenge a lot of us face.

And as the Mondays passed the Parkrun results kept getting processed to these sports pages. I kept asking myself the question...”ah sure look-it, why not give it a go?”

Thank God for Dara Gallagher (the guru from PC Refresh in Maghera). I went in looking for a phone cover and after chatting about running and his marathon training, I left with the knowledge of the new Parkrun in Garvagh Forest.

Bingo. Now I was set. Off I went last Saturday morning with my running shoes, barcode and willpower, the only three necessary ingredients.

My time-keeping was questionable and missed the start. Not the ideal debut, so I just went into full Forrest Gump mode and just ran until I could see people. And they soon appeared.

It was just week four and their 104 parkrunners was the record so far. It was great. Everyone was welcoming. There was chatter on the way around and a range of different speeds. There were no rules. Just everyone's own mission.

There was great signage and someone was on hand at every junction to point you on the right path. The trails were in good nick.

This was athletics in its rawest form. This was running's answer to the jumpers for goalposts brand of football many of us played in local yards, fields and gardens around home back in the day. There was no scoreboard, but everyone who wanted to know the score would find it and use it as a base to target next week.

At the finish line there was no shortage of encouragement, a ripple of applause and there was a chance to chat with complete strangers who were all on the same wavelength.

From one of my cousin's Facebook timeline, you can see Saturday is their family Parkrun day. An activity that is open to all abilities.

Securing Parkrun for Garvagh Forest is an unquantifiable addition to the local community. It opens up social running to another swathe of the county. People like me, who just needed that final push to give it a go.

There was always one in Limavady and Cookstown plays host to runners from across the county border from Derry.
The chance to dip your toe in the water is never far away and to fence off an hour in the week for self care.

In our Women in Sport feature this week, Sheila McCloy spoke of how she got involved in running and is now thinking about marathons. Someone suggested to her to take some time every week for 'me time'.

In an era when keeping fit has become the norm for many, Parkrun is the perfect gift.

Thank God for Parkrun and those who facilitate it. When the klaxon sounds this Saturday, there will be another army of runners and walkers at the ready. Looking at their watches ready to challenge themselves in whatever way they wish.

Walking with Danny Quigley as he continues extraordinary Ironman challenge

'Maybe he’ll do a bun sale the next time instead to raise money.'

A phone call from Glenn Ross put her into the limelight