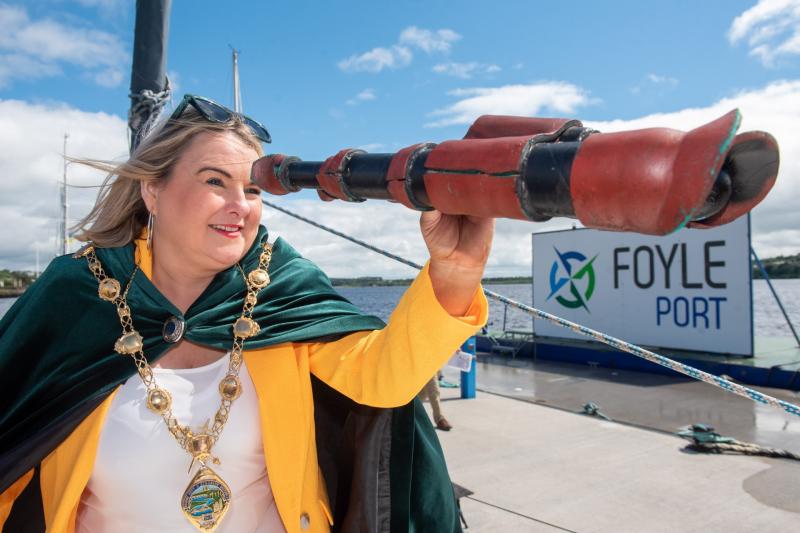 Mayor Sandra Duffy casts an eye over the official launch of the Foyle Maritime Festival programme, which runs from July 20-24.​

There was sea-faring fun to be had as Mayor Sandra Duffy launched the Foyle Maritime Festival Programme, with a little help from the Lillies of the Lough.

The all-female sailing group hopped on board with the Mayor to help launch the event which will see them making their debut this year at the Festival.

This event will be delivered by Derry City & Strabane District Council with support from the Executive Office, Foyle Port, the Loughs Agency and Diageo, running from July 20 to 24.

Founded by local woman Shauna O'Neill, who was awarded a bursary in 2012 to take part in the Clipper 2011-12 Race, Lilies on the Lough is a female sailing group established during lockdown advocating the positive effects that sailing has on female well-being both, mentally and physically.

The Lilies will be taking part in the festival's daily programme of animation and also participating in the magical Parade of Light on the river on showcase night which will take place on Friday, July 22.

A major element of the Maritime Festival is the Clipper Race stopover and the arrival of the first yacht into port traditionally signals the start of the festivities. It's now 10 years since the love affair between the city and the Clipper Race began.

Leg eight, which includes the New York to Derry Race, features the largest number of Irish crew on board any leg of the race, but unfortunately was one of the Clipper 2019-20 Race legs unavoidably postponed due to the pandemic.

The festival itself is set to get off to a very special start on the evening of Wednesday 20th July with the Clipper Race Prizegiving taking place in the heart of the festival village, Dopey's Den, for the first time.

In addition to the accolades awarded by the Clipper Race at the end of each race, Mayor Sandra Duffy will be presenting a crew member from each team with a special 'Spirit of a Derry Girl' Award.

Another fantastic female debut for this year's festival will be the appearance of the stunning Tall Ship, Grace O'Malley. Pride of the Atlantic Youth Trust, this regal ship has been recently purchased as a vessel for youth development across all of Ireland and will be making its much anticipated, premier appearance in the North of Ireland at the festival.

Its namesake, Pirate Queen Granuaile met with the Mayor to celebrate the festival's launch ahead of her own performance on board the Grace O'Malley at the event.

Mayor Duffy said: "I am delighted to be joining some of our skilled female sailing crew to launch the Foyle Maritime Festival programme.

“We are absolutely thrilled that once again we have the opportunity to showcase our beautiful City and District with an international events programme of this calibre.

“As Mayor it will certainly be a major highlight of my time in office and I look forward to welcoming both the Clipper Race fleet and the many visitors who flock to enjoy our beautiful riverfront throughout the celebration.”

Head of Culture with Council, Aeidin McCarter added: “The Foyle Maritime Festival has a special place in the hearts of people here and we've already had amazing support from our local businesses and partners interested in engaging with the Festival and all the opportunities it brings for the local economy.

“We're expecting record visitor numbers this year after such a long and difficult break, and people won't be disappointed when they see the programme which really does have something for everyone. It will be fantastic to see our quayside buzzing once again.”

You will be able to kick off the celebrations early with the LegenDerry Street Food Festival, set to whet the appetite from July 15 to 17.

McFarland Way will host the welcome party for the arrival of Clipper 2019-20 Race participants due to arrive in port from Thursday, July 14, showcasing the very best of local street food and craft drink producers with live DJ Sets and a totally unique dining experience.

The festivities will reach a spectacular pinnacle at the Festival Showcase Event on Friday evening, July 22, with a magical evening of music, dance and theatre culminating in the enchanting Parade of Light on the River Foyle set against the backdrop of a stunning pyrotechnic display. Finally, the Clipper Race fleet will leave our shores once again as we bid them bon voyage in the dramatic Parade of Sail on Sunday, July 24.

Find out more about all the magic of the Foyle Maritime Festival at: www.foylemaritime.com