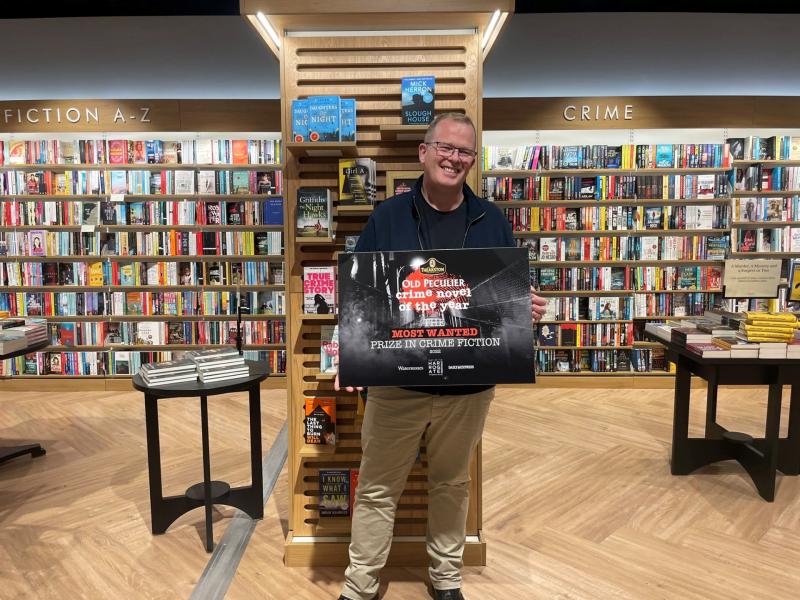 McGilloway, is one of 18 authors longlisted for this year’s Theakston Old Peculier Crime Novel of the Year, visited Waterstones in the Foyleside Shopping Centre, to help promote his book, “Blood Ties”.

The book, which is the sixth installment of the Inspector Ben Devlin series, where a brutal murder in the north finds itself linked back 20 years to a murder of a teenager in Strabane.

In an interview last year, McGilloway said of the novel: “I'd had this idea about the fresh blood of a murder victim somehow appearing at the scene of their killer's murder years later.

“I'd tried to develop it as a story a couple of times and I just couldn't find a way to tell it. I knew it didn't have 'legs' yet so I was always abandoning it and coming back to it at a later stage.

“I kind of worked out that it would suit Devlin and I could then see the patterns. That idea of blood connecting things, which then led on to the story with his dad and the blood ties within families – how our identities are defined by our family relationships.

“Who we are and our sense of self, we get from the people that we love. That's why the book opens with a line from a poem that I love by Elizabeth Jennings, Identity, 'When I decide I shall assemble you'.

“Our own sense of identity is one thing, but other people have a sense of who we are as well that might be completely different – but nonetheless it's who we are.”

Previous winners of the prestigious accolade include Lee Child, Val McDermid, Denise Mina and Mark Billingham, and all 18 of this year’s books are available at Waterstones, either instore or online.

As well as a cheque for £3000, the winner receives an engraved oak beer cask, hand-carved by one of Britain’s last coopers from the Masham brewery.

Now in its 18th year, the Theakston Old Peculier Crime Novel of the Year Award is presented by Harrogate International Festivals and sponsored by T&R Theakston Ltd, and celebrates excellence, originality, and the very best in crime fiction from UK and Irish authors.

In addition to Brian’s book, Blood Ties, other longlisted books this year include: Girl A, the gruelling bestseller from debut novelist Abigail Dean; historical mysteries set in Georgian London’s dark underbelly, a haunted ship in the 1600s, and the turbulent streets of 1950s Bombay; the latest in Mick Herron’s Slough House series, which have been adapted for Apple TV’s Slow Horses; and The Heron’s Cry, the second installment in Ann Cleeves’ new Two Rivers series.

But it's not just the expert industry panel who get to play jury. The public are invited to vote for their favourite novel at: www.harrogatetheakstoncrimeaward.com

at the longlist stage by Thursday 26 May, with the shortlist of six authors announced on Tuesday, June 14, when voting opens again to pick the winner.

This year’s winner will be announced at the opening night of the Theakston Old Peculier Crime Writing Festival on Thursday 21 July in the spa town synonymous with the disappearance of Miss Marple and Poirot creator Agatha Christie.

Sharon Canavar, Harrogate International Festivals Chief Executive, said: “Waterstones plays a major part in this annual Festival of crime writing, and as ever we are grateful to them for alerting the public to the whereabouts of these 18 most-wanted titles.

“Brian is one of the writers vying for this year’s title, and to help promote his book and win over a few more fans, he popped into the local Waterstones.

“The bookshop is a terrific supporter of the Theakston Old Peculier Crime Novel of the Year Award, with a creative partnership of digital and in-store campaigns.

“The 18 books, all available at national Waterstones, have been selected by an academy of crime writing authors, agents, editors, reviewers, members of the Theakston Old Peculier Crime Writing Festival Programming Committee, and representatives from T&R Theakston Ltd.

“In a few weeks, the shortlist will be announced along with the second round of public voting. We’re excited to crown the eventual winner at the awards ceremony, where an icon of the crime genre will also be honoured with the Outstanding Contribution accolade.”

Voting at the longlist stage closes at 11.59pm on Thursday 26 May. Further details about this year’s Theakston Old Peculier Crime Novel of the Year Award are available at: https://harrogatetheakstoncrimeaward.com/