Two separate firms were targeted in the early morning raid.

Thousands of pounds worth of tools have been stolen from a County Derry business in a brazen raid on Monday morning.

J3 Belts & Bearings posted CCTV footage of the break-in on their Facebook page, in which the suspects can be clearly heard speaking in full conversation as they carry out the theft at Sperrin View Business Park.

The incident has taken place as the company prepare to celebrate two years in business, and they have appealed to anyone who recognises those in the footage, or their voices, to get in touch.

"Today at J3 we where supposed to be celebrating 2 years in business," they said in a Facebook post.

"Instead at 3:12am this morning these fellows put a dampener on celebrations, relieving us of a substantial amounts worth of both Milwaukee power tools and Teng Socket sets. 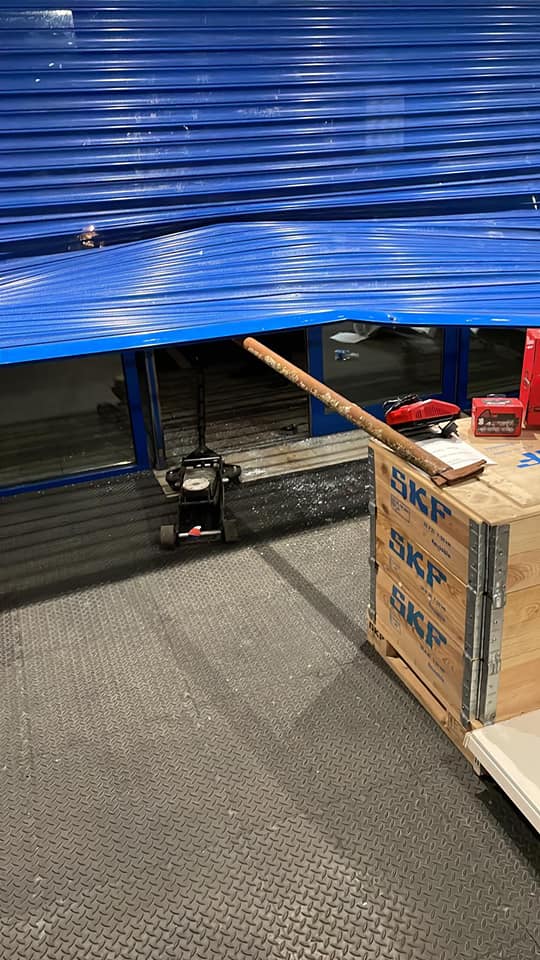 Substantial damage was caused during the incident.

"Can everyone please listen carefully to the video below, take notice of their voices, build and stance. Do you recognise them? If so contact John in strictest confidence 07710093819.

"We are only a young business, that are already finding it hard to get up on our feet without low-life’s like this."

Derry Now spoke to Director Jack McGilligan, who said he was 'gutted' by the theft.

"The alarm went off in our house and by the time me and by brother got down, they were in and out. They were in the shop for two minutes and 47 seconds.

"There is no panic in those three lads whatsoever. MFL has been broken into four times, that's where they got the trolley jack to break the door."

"I'm just 22. I've just finished uni, graduated three weeks ago and have started into taking this full time. We were about to celebrate two years in business.

"It's tough. Our tools have to be paid up front, so you take that straight away before we start into whatever damage has been done to the doors.

"We got a new shutter fitted last night and haven't even the invoice for it yet."

Jack feels the police could be doing more to prevent these kinds of thefts.

"The police arrived at 4.05am, it took them 45 minutes from Magherafelt. We haven't had the CID yet either," he said.

"They said as much as anyone else would say if they came out. They said they'd look into it and see.

Footage of the suspects has been shared online.

"We're trying to get it sorted so it doesn't happen to anyone else again. It's happening too much at the minute. We're just trying to appeal for information."

Nearby business MFL Plant Machinery were also targeted during the incident, with a Husqvarna 365 chainsaw and K670 Con Saw taken in the raid.

The owners called for more action from the police following the crime.

"Five times in four years this industrial unit has fallen victim financially and mentally to low life thieves," they said in a Facebook post.

"I would like to see some ACTUAL action from Police Mid Ulster and Mid Ulster District Council."

The PSNI said enquiries into the incident were 'ongoing'.

"Police received a report of a burglary in the Glen Road area of Maghera shortly before 3.20am on Monday 1st August," said a spokesperson.

"It was reported that three males wearing masks and gloves entered a premises in the area at around 2am. A number of tools and cash were stolen during the burglary.

Last night at 3:15am our premises got broken into, on the eve of celebrating 2 years in business. Please listen to the video and se did you recognize the voices/stature or anything about these three men. Please contact John on 077100 93819. Any retweets would be appreciated. pic.twitter.com/dJDvao2j5i

"Enquiries are ongoing to establish what happened and anyone with information, or who saw any suspicious activity in the area between 2am and 3.30am, is asked to call police on 101, quoting reference number 222 of 01/08/22.

"Alternatively, you can submit a report online using our non-emergency reporting form via http://www.psni.police.uk/makeareport/.