MacD on Music: Touts, Tramp and The Undertones return to Derry 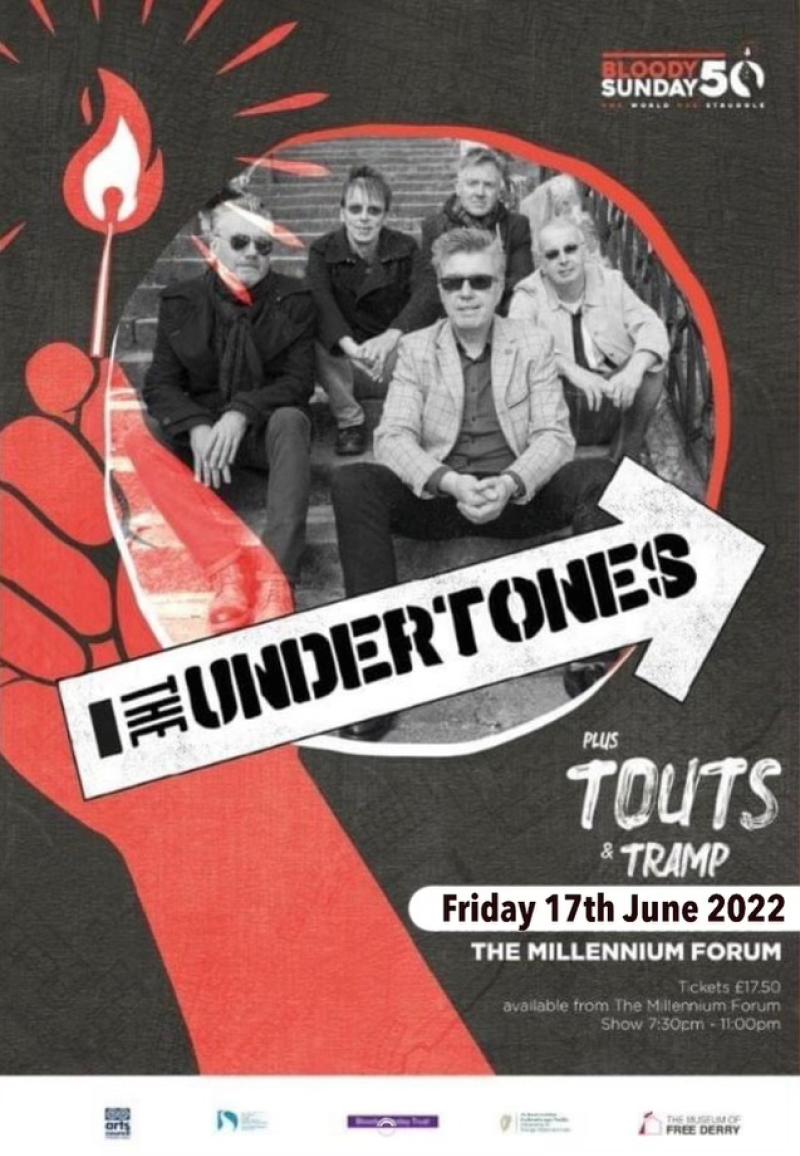 This week sees the triumphant return to the Millennium Forum stage of the Undertones, with support from Touts and Tramp, two of the best up and coming groups on the local scene. I caught up with members of the three bands ahead of the gig:

Regular readers of this column should be familiar with Tramp by now. For those who aren’t, they’re Siânna Lafferty (guitar, vocals), Fionnbarr Doran (guitar), Ellie McFadden (bass) and Steamy-Ciarán McCay (drums). The group recently released their debut single ‘Frankenstein’ and are currently going from strength to strength.

How does it feel to (finally) open for the Undertones?

It feels as surreal as the first time we found out about it!  We feel massively privileged though, even though our hearts stop for a second when we casually remember that it's this week!

What’s it like playing a venue the size of the Forum?

We've never played in a venue like it, the festivals we've played at just have had such a different outdoor atmosphere, we're expecting to feel tiny on that big stage with a full audience! Again, such a privilege. But we plan on making good use of it on the night!

Have you got much lined up over the summer?

We have a few fun things lined up this summer; next, we're supporting the Canadian punk band 'Chastity' in Bennigans; we have a couple of shows in Letterkenny with 'Aaron Everything' this month and in July with Disturbance Fest. But the most highlighted in the calendar is a trip to Bristol to play in Friendly Records and then Farmfest 2022 in Somerset! We are buzzing to be getting on the ferry for the first time for a gig together. It’s going to be a pretty memorable summer!

Touts are Matthew Crossan (vocals and guitar), Jason Feenan (drums) and Luke McLaughlin (bass and vocals). They’ve been making waves for a few years now, in Derry and beyond, releasing two EPs and opening for acts such as Paul Weller and Liam Gallagher. Their most recent release, ‘Shane MacGowan’s New Teeth’, came out a few weeks ago and can be found in Cool Discs.

How does it feel playing with the Undertones again?

We love playing in Derry, seeing familiar faces at shows adds to our enjoyment of the whole experience, and everyone can understand us talking. We're all Undertones fans, and they've been welcoming of us.

How have things been going for you post-Lockdown?

The lockdown gave us an opportunity to work on songs and build our own recording space, being able to write consistently in a studio environment has helped our song writing mature and develop.

It's also given us a chance to think more about our live approach, and we think post lockdown we've been playing some of our better sets. The biggest difference now is that we need less songs to fill the same amount of time, which has given us a better and tighter set.

Have you got much else lined up over the summer?

We have a few more shows to be announced in the coming weeks, but we have some major recording projects that we want to finish before hitting the road heavily, which we have planned for later in the year. When it rains it pours, and we have a bigger back catalogue than ever before.

It’s a fairly safe bet that the majority of Derry people are familiar with the Undertones. For those who are not, they are John O’Neill (guitar), Damian O’Neill (guitar), Billy Doherty (drums), Michael Bradley (bass) and Paul McLoone (vocals). As Ireland’s greatest punk band, they’ve been going strong for more than forty years and continue to play sold out tours around the world. I was chatting to Damian about the upcoming gig.

How does it feel getting back on the road post-COVID?

It certainly feels wonderful to be playing again in front of a live audience. I think we've all missed it so much which makes it even more of a joyous event. We're only now just catching up with shows that were rescheduled from 2 years ago but we're getting there!

What’s the significance of this Bloody Sunday gig for you?

We feel honoured to be involved in the 50th year anniversary of the Bloody Sunday concert. We'll certainly never forget that day. I'd say virtually every family in Derry would've known at least someone who was murdered or injured. The years of lies and hurt and pain of what the bereaved families then had to endure was despicable. However, I'm sure the concert will be a celebration of great music.

What do you think of Touts and Tramp?

The Touts remind me of us back in the Casbah days - youthful exuberance, great songs and punk attitude! I'm also really looking forward to seeing Tramp. I really like their debut single 'Frankenstein' (especially the guitars). Interesting band...definitely one to watch!

Have you much else lined up for the summer or beyond?

We've got a slot in Glastonbury coming up next as well as various UK and European festivals during the summer, then its more UK club shows in the Autumn.

All the above groups can be found on Facebook and Instagram @theundertones.official, @thisistramp and @touts_band. They play the Millennium Forum this Friday.

Also, this weekend sees the much anticipated Frost and Fire Festival in the Nerve Centre. For more information, visit nervecentre.org