MacD on Music: Saint Sister are back doing it for themselves 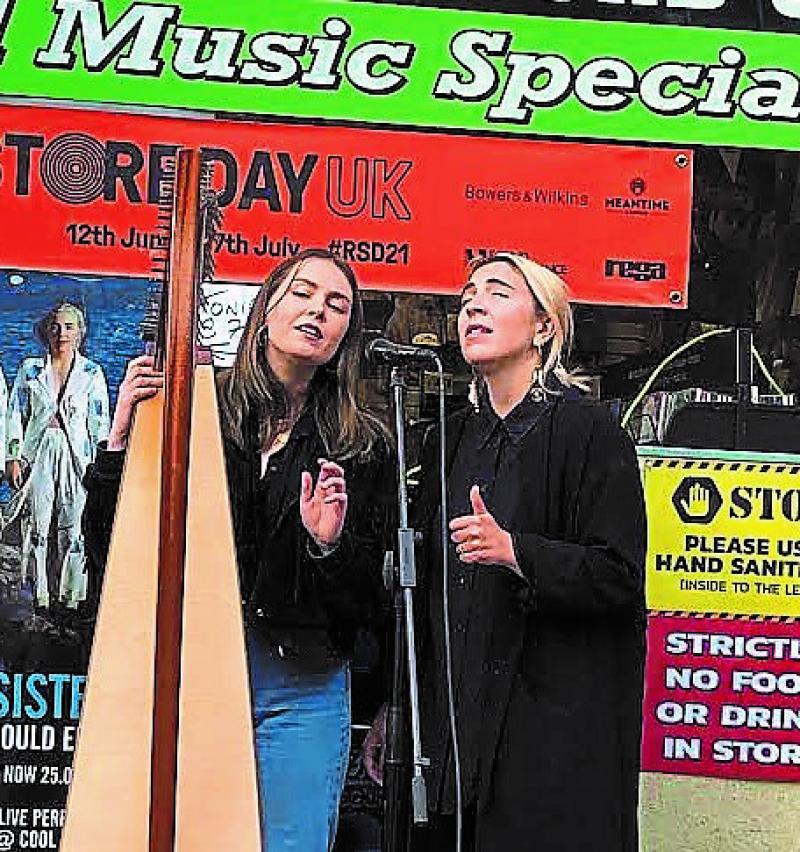 Fresh from winning Album of the Year at the NI Music Awards, the Derry/Belfast duo Saint Sister are destined for big things.
The group, made up of Derry born singer/harpist Gemma Doherty, of the Delacroix Dohertys, and Belfast-born singer Morgana MacIntyre, are currently playing their first tour in almost two years.

I caught up with Gemma after their triumphant Nerve Centre debut last weekend:

What’s it like playing for crowds again after a year of livestreams?

“It was amazing to see creative people come together and make some really special online shows in the absence of live music.

“That said, it’s hard to beat the feeling of people coming together and experiencing something live in a room.

“I really missed the feedback you get from the audience and how that feeds into the performance.

“It can completely dictate the energy of a show, and that’s just not something you can create with only cameras in the room.

“I think we’ve been a lot less nervous chatting and engaging with the audience since everything has opened back up, and we’re a lot more aware of being in the moment since it was taken away from us for a while.”

Which do you prefer? Stripped down shows or playing with the full band?

“I absolutely love playing the shows with the full band, especially with the seven-piece or the 11-piece band that we got to play with for our album livestream back in June. It’s a dream to hear the full scale of the album arrangements behind us when we’re on stage.

“But I’ve been really enjoying the run of more intimate two-piece shows that we’ve been playing over the last few weeks.

“When you strip the songs right back to their core, it becomes all about the vocals and finding the journey of each song with just one instrument behind it.

“ We seem to lock into a different kind of flow and it feels like we’re engaging with the audience on a different level.”

What was it like opening for Keane in America before lockdown?

“It was great craic. Those were some of the biggest venues we’d ever played and the crowds and venues were beautiful.

“The last show we played in the states was in the stunning Dolby Theatre in LA where the Oscars had been held just a few weeks before.

“It was supposed to be a 16 date tour, but we got to play 4 shows on the West Coast before things started closing down and we had to come home.”

What’s been the best part of touring again and why was it playing Derry?

“Hearing people sing along to the tunes from the second album has been really special, and as I mentioned before, being able to feel the audience in the room again and react to their energy. Derry was a class gig, we loved it.

“It’s always a bit nerve-racking playing in your hometown, the stakes feel higher.

“But it was the warmest welcome we could have asked for, and the same in Morgan’s hometown Belfast the following night.”

Did you make any changes to the new album after lockdown delayed it’s release?

“Thankfully we had just got our final mixes back around the beginning of March 2020, and by the time the first lockdown hit we were already getting it mastered. It would have been so tempting to go back in and tweak it endlessly with the perceived extra time that lockdown gave us.

"I’m grateful in a way that it was finished before all that, and that it got to stay true to itself before the world went a bit mad.”

How did it feel to win the NI Music Award’s Album of the Year? (Congratulations by the way!)

“Thank you! There were so many great albums out this year so we were genuinely shocked when it was announced. We missed the ceremony in the Ulster Hall unfortunately as we had a show in Waterford that night but we came off stage and looked at our phones and got a lovely surprise!

"And we got to celebrate properly a few nights later with the hometown shows in Derry and Belfast.”

Other Voices is 20 this year. Want to share some memories of it from over the years?

“Some of our favourite experiences as a band have been with the Other Voices gang.

“There Courage livestreams were so inspiring and really set the bar for what a streamed experience could be, taking hold of some of the country’s most beautiful spaces and opening them up in a new way.

“We did an Other Voices livestream in the Guildhall last July with the string quartet from the Crash Ensemble and I think it was one of my favourite shows of all time.

“ We’ve had some of the best weekends in Dingle over the years too, playing in St James’ Church in 2017 was a massive one.

“We met Lisa Hannigan for the first time outside the church after that gig, which lead to us going on tour with her a few months later, and having her feature on our most recent album.”

Saint Sister’s brilliant second album, ‘Where I Should End,’ is available in Cool Discs on Foyle Street and other good record shops.