The Oakleafers controlled the Division 2B final this afternoon. 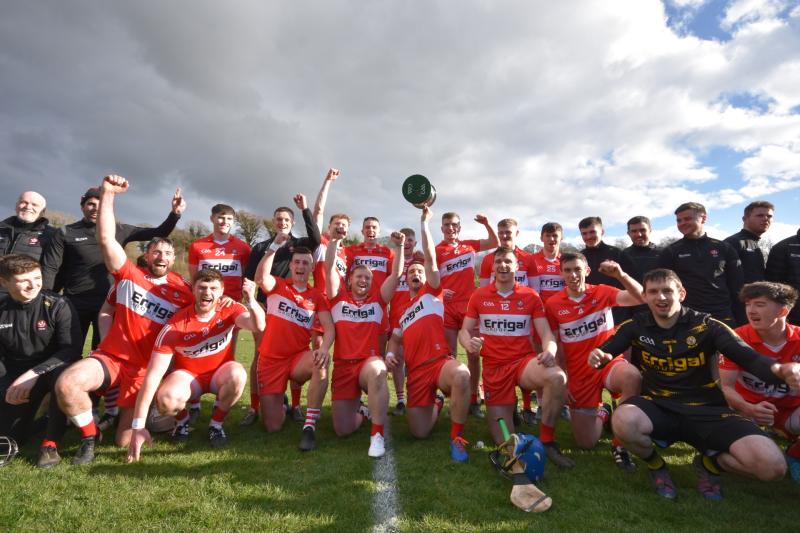 Derry hurlers celebrate winning the NHL Division 2B title and with it, promotion to 2A. Pic by Mary K Burke.

Derry sealed promotion to Division 2A of the Allianz NHL with a five-point victory over Sligo in Ederney this afternoon.

After a nervy start, Derry set down an emphatic marker through Odhran McKeever's third minute goal, the Lynch's man taking a pass from Déaghlan Foley and rifling to the net.

Cormac O'Doherty added a 7th minute 65, before Sligo got their first point through Kevin Gilmartin on 8 minutes.

Andy Kilcullen swapped points with goalscorer Odhran McKeever, before repeating the swap with Sligo centre back Joe McHugh to leave Derry leading 1-3 to 0-3 on 16 minutes.

Brian Óg McGilligan and Conor Hannify swapped scores, before Derry notched three unanswered points to lead by 1-7 to 0-6 on the half-hour mark.

Sligo then dragged themselves back into the game, Niall Feehily rifling home from 25 yards, before Jimmy Gordon's heroics at the other end kept Derry's half time lead to just a single point.

The table-toppers started the second half with points from Fintan Bradley (2) and Gerald Bradley, and though Conor Hannify hit back for Sligo, the tide was beginning to turn.

Derry maintained a three point lead through much of the third quarter, and by the 50th minute, a Cormac O'Doherty free had given them a six-point cushion.

A 57th minute solo goal from Joe McHugh cut the deficit to five and gave the Yeats men hope, but Derry reasserted their control of the game in the final ten minutes.

Gerard O'Kelly-Lynch spurned a chance to leave the scoreline tighter, firing a penalty over the bar deep in stoppage time, and Colum Cunning's whistle signalled second-tier league hurling for Derry in 2023.

The Derry squad have targeted promotion since the start of the year.