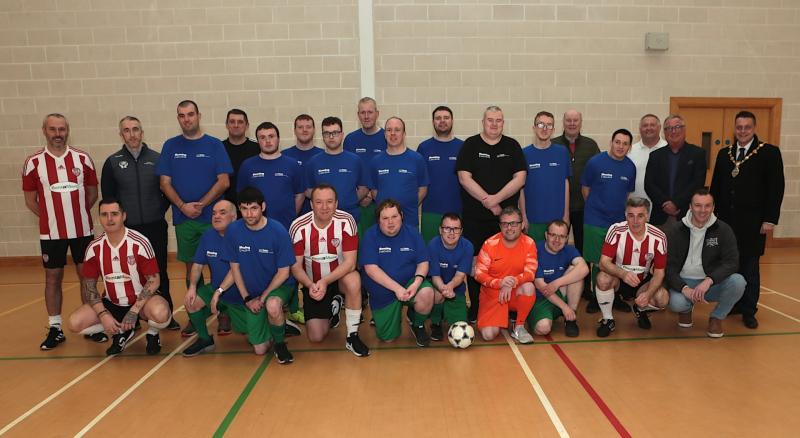 The new Destined team and the Derry Legends football team pictured with Derry Mayor Alderman Graham Warke ahead of their challenge game.

Destined the Derry based learning disability support charity have formally launched their very own football club.

Following the lifting of the restrictions around the Covid 19 lockdown the group explored ways of introducing its members back into some forms of physical activity, it set up a cycling club and developed keep fit programmes.

The members of the Destined Derry City supporters club decided that they wanted to organise a football team to help them get into a fitter state and put in place a training programme.

Kaelan Northey, Chairman of Destined FC said “There were a number of us who had an interest in football – I’m a big Spurs man myself, so we thought we should be playing a bit as well. I played for the Irish Special Olympics team in Greece and others had played for the Foyle Strikers in the past. Some of the team come from the City but we also have some of the members from our Feeny centre playing with us as well.”

"I want to take this opportunity to congratulate the Destined FC team on their formation and wish Declan and the team well as they begin playing games," said Mayor Warke.

"There are so many benefits of playing team sports from a health and wellbeing perspective and the sense of comradery it generates among the players.

"Thank you to the Housing Executive, Martin Clifford and the Credit Union for their generous sponsorship of the team and I look forward to watching your journey as a team in the future."

Paddy Arbuckle and Eddie Breslin, who have supported the team from the start, paid tribute to the Housing Executive who have helped with the purchase of the new team football rig and training costs, Martin Clifford who sponsored the training kit and shin guards and Derry Credit Union who helped with the running costs of the club with a donation of £400. Good luck to everyone involved.