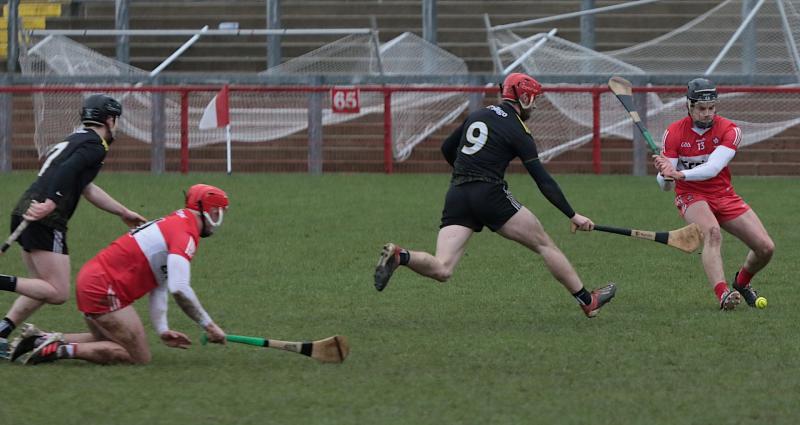 It was far from straightforward, but Derry picked up two points against Sligo in their opening league game of the year at Celtic Park.

A strong second half showing ultimately earned a deserved victory for the hosts after a shaky first period which they ended trailing by a single point.

Sligo were well on top in the early stages and led by three before goalkeeper Matt Davey gifted Derry a goal by placing the sliotar right into the hands of Gerald Bradley, whose shot deflected off Mark Hanniffy on its way into the net.

Cormac O’Doherty then gave Derry the lead for the first time but it was short lived as Sligo, entirely through the clinical Gerard Kelly-Lynch, continued to trade scores right up until the game’s second goal on 24 minutes. Again it went Derry’s way with Tiarnan McHugh picking up the loose ball and drilling it low past Davey to make it 2-2, 0-6.

Derry briefly went three points clear when Bradley hit a point but Sligo refused to let up, and by half time they had the lead back thanks to four consecutive frees from the consistent Kelly-Lynch.

Derry came out strong at the start of the second half and scored seven of the first eight points, five of which came from Cormac O’Doherty as the home side raced into a five-point lead.

Sligo kept plugging away and O’Kelly Lynch brought his side to within three points with just two minutes remaining. But a quick blast of scores from O’Doherty, Tiarnan McCloskey and Na Magha's Deaghlan Foley ended Sligo hopes, with O’Kelly-Lynch’s late, late penalty ultimately just a consolation. Derry's Richie Mullan was black-carded in the incident which led to the penalty.

The late introduction of Padraig Nelis meant that along with Foley, there were two players from Na Magha representing the city in the closing stages.