The sides meet on Saturday afternoon in Ardboe. 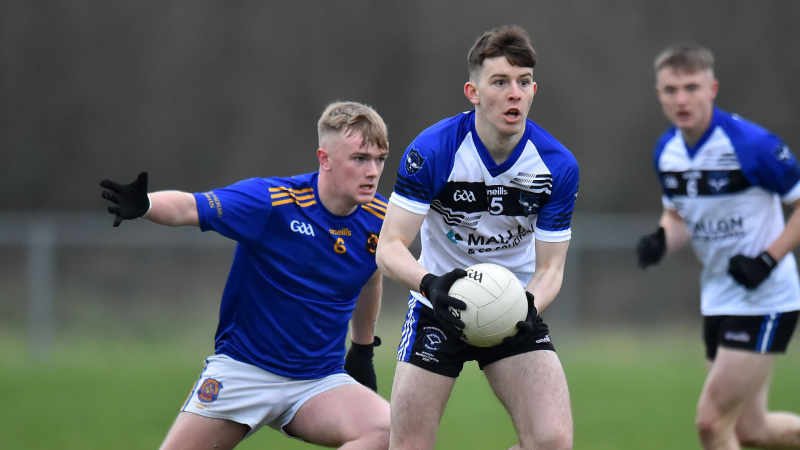 Sean Kearney’s goal was the difference between the teams when they met in the quarter-final stage two years ago.

It helped Maghera towards a final they never got to play, with the Covid-19 pandemic seeing then share the title with fellow Ulster giants St Colman’s Newry.

Three of the Holy Trinity side remain on board.  Shea Quinn leads the attack from centre forward, with Moortown’s championship winning midfielder Blaine Ryan still on board.

The third is Shea Lawn who has swapped the goalkeeper jersey for a spot in attack.

Managed by John McKeever and Peter Canavan, Holy Trinity needed a goal from substitute Ryan Quinn – his second of the season – to snatch a victory over Abbey CBS in the closing stages to book the school’s first ever semi-final spot.

Maghera also had to dig themselves out of a hole in their last six clash.

A Conor Casey goal put St Patrick’s Cavan six points clear after 28 minutes, but two points from man of the match Shea McKenna gave the Derry men hope at half time and they took full advantage.

They lost Derry senior panellist Mark Doherty to injury at half-time and manager Sean Marty Lockhart said the Newbridge starlet could ‘possibly’ be back for the this weekend’s tie.

If Doherty doesn’t make it, Luke Diamond could be in line for a start after an impressive showing in the second-half of their win over Cavan.

Maghera won the Rannafast Cup two seasons ago, but have lost key players Niall Duggan, Peter McCullagh, Jody McDermott and Ray Dillon to long-term injury. On the flip side, they did get Mark Doherty and Connor Shiels joining the school for Sixth Form studies.

A glance at the Cookstown’s attack will give the Maghera management food for thought. It will be interesting to see which of their dynamic half-back line will pick up Shea Quinn. It will be more than likely be Jude Moore, with Patrick McGurk left free to attack on the flank.

Fionn McEldowney or Connor Shiels will be the men considered for the marking assignment on Shea Lawn.

Shiels struggled with the space in front of Darragh Lovett in the early stages of the Cavan game before McEldowney was switched across.

At midfield, the power of Ruairi McHugh and Blaine Ryan will be something Maghera duo of Patrick Walls and Dara McPeake will need to get their teeth into.

An interesting game in prospect, which will be every bit as cagey as two years ago and Maghera’s scoring trio in attack could tip the scales in their favour.