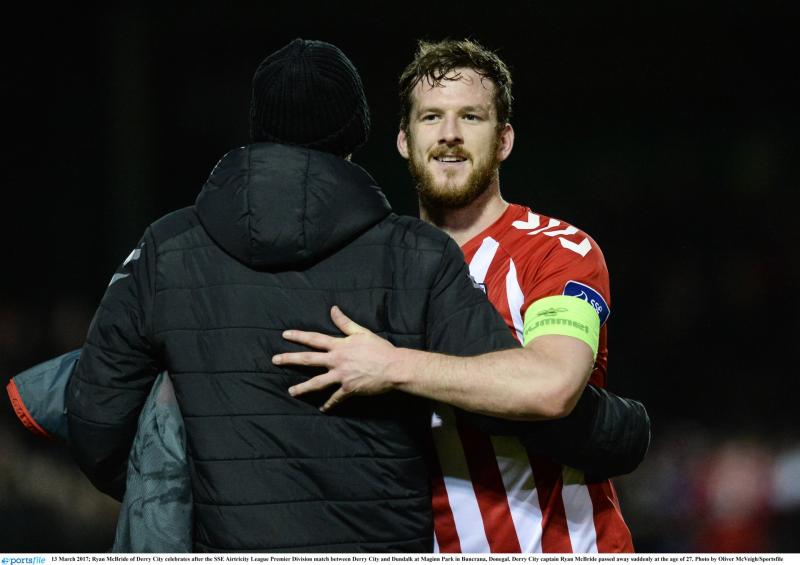 Ryan McBride’s legacy lives on through the McBride Foundation.

Republic of Ireland manager Stephen Kenny will head a star-studded list of guests who will advise a select group of young men and women locally about mental health and well-being at a crucial stage in their lives.

Run by the Ryan McBride Foundation in association with Derry City and Strabane District Council, the ‘Mind Yer Head’ programme is inviting local youths aged between 16-20 to learn the stories of individuals who have fought back from setbacks to get their lives back on track.

The Foundation have assembled an incredible list of mentors for this year’s event which will run for one hour a week over 12 weeks, with the purpose of teaching young adults about overcoming challenges, navigating difficult times and being able to help friends in trouble.

Each mentor has all faced challenges in their own lives and will share their own personal experiences in a group setting where those in attendance will also be invited to ask questions.

Among those confirmed to attend are Republic of Ireland manager Stephen Kenny and Northern Ireland manager Kenny Shiels, who both managed Ryan McBride at Derry City at different points in the young defender’s life. Ryan’s struggles in his own life between the ages 16-20 have been the insoiration behind this programme, with the Brandywell man changing his life around to become a much-loved Derry City captain before his tragic death just five years ago.

Ryan’s sister Caitlin McBride is hoping that the ‘Mind Yer Head’ programme can help impart some important lessons to those young adults who attend.

“The programme is about how low a lot of the mentors have got and how they have managed to bounce back, how they have changed their lives around,” she explained.  “It’s not just about struggles, it’s really about resilience. We’re aiming for an important age group because it is a cut off point for a lot of people in life and life starts to change between 16-20, so that’s why we’re aiming for that group.”

"That is an age group the Foundation has always aimed at because we see that as when Ryan changed his life as well. He wasn’t really going anywhere at that stage, and lost out on a lot of opportunities, and it could have been so different, but John Quigg and Eddie Seydak talked him into going over to Derry, and when Stephen Kenny became involved it just changed his whole viewpoint. We’re trying to afford people if not the same opportunity, but mechanisms to improve their own situations or those around them.”

“It’s taking all the issues we have in Derry and other areas. It’s not necessarily that those taking part have those issues, but they will be at an age where they can identify and help even friends who are struggling. Everyone in Derry has been touched by suicide and usually in the background a lot of these issues are involved somewhere along the line. It’s about people being able to identify and try to help people.”

Enrolment is now open for those interested in attending the ‘Mind Yer Head’ progamme. Simply email info@mcbride5foundation.com or call 07708303914