Derry come up short against Donegal 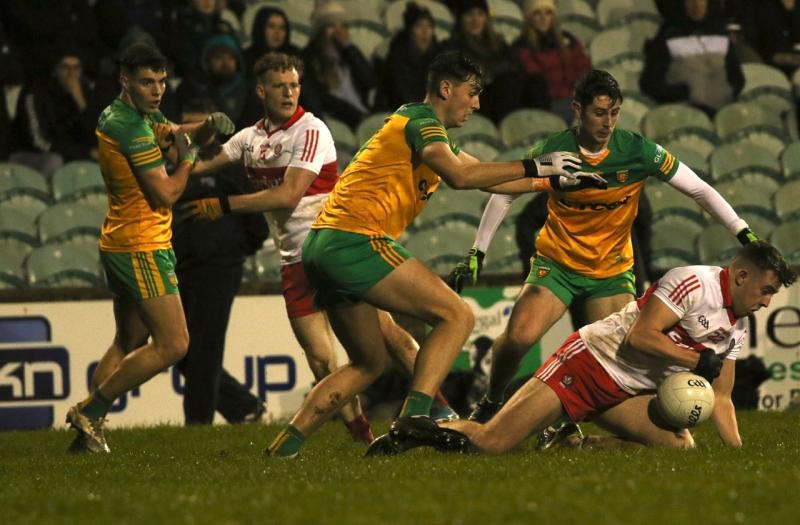 However seriously they’re taking it on the face of things, first half goals from Caolan McGonagle and Odhran McFadden-Ferry were enough for Donegal to seal a place in Saturday’s Dr McKenna Cup final.

For a county who has had a testing relationship with the competition down the years, they’ll have a chase of a first win since 2018 come Saturday evening. Either way, it’s another game and as they all say, playing is better than training.

Last July, Rory Gallagher, on his old stomping ground, saw his evolving Derry side give Donegal the fight of their lives in the Ulster SFC quarter-final, only to see Patrick McBrearty win it for the hosts with a last gasp winner. At stages early on in the first quarter at MacCumhaill Park they looked pragmatic and purposeful.

However, with both teams missing a number of regulars and both Gallagher and his opposite number Declan Bonner wanting to spread about the minutes, it was Donegal who eased through. The McKenna Cup is not where either manager should be evaluated but put simply, Donegal looked a little farther down the track.

With Jeaic Mac Ceallabhuí  and Jamie Brennan opening the scoring in the floodlit drizzle, Donegal created decent opportunities to extend that lead. Derry, on the other hand, were a little more choreographed than clairvoyant, and certainly more economical.

Approaching the first water-break, the visitors had worked themselves into a 0-4 to 0-2 lead with Enda Downey scoring twice, the second of which was right on the money, before Niall Toner and Paul Cassidy joined the scorers.

Donegal, decent in their approach yet sloppy at times in their execution in the first quarter, kicked four wides. That said, they did manage to get in front when McGonagle prodded home from close range after McFadden-Ferry had won a seemingly lost cause from a Brennan ball that was dropping off target and Michael McEvoy couldn’t hold onto the ball as McGonagle poked a goal.

Tellingly for Derry, Downey was substituted after picking up a bang on the head and in the second quarter, Donegal started to iron out some of their offensive creases. They fashioned a second goal on 31minutes, with McFadden-Ferry finishing off a move - shooting low past Conlan Bradley - that involved Brennan and Shane O’Donnell.

O’Donnell posted the last score of half, his first at senior level for Donegal, whilst his brother Niall had been introduced for Brennan, who hobbled off late in the half. Donegal were 2-5 to 0-6 in front at half-time.

Donegal made it to the last four courtesy of back-to-back victories, firstly against Down, 1-13 to 2-8, and then a 0-15 to 1-9 success over Antrim in Portglenone on Saturday. Derry, for their part, shared a 0-12 apiece draw with Monaghan prior to sealing their progression to the semi-finals courtesy of a 0-17 to 1-10 scoreline in Roslea.

The second half was played at pedestrian pace, with Gallagher perhaps putting his eggs in the Down basket, with James McCartan’s team his first opponents in Division 2 on Saturday week.

Michael Murphy came off the bench for Donegal and his free meant for a 2-8 to 0-7 advantage as the both benches were run. Derry did create a decent goal chance when Padraig Cassidy got around the outside. His centre, waiting on anyone in white and red, was met by Donegal substitute Eunan Doherty under his own crossbar.

With Donegal 2-9 to 0-8 up at the three-quarter mark, McGonagle’s point brought the Buncrana midfielder 1-2 for the night and the man of the match award. And when Derry saw Murphy scamper back to his own half to win a tackle, they’d have loaded the bus there and then. Donegal were rusty enough in places near the end, but they’ll get another runout come Saturday.