Four for Flanagan as Maghera stroll to victory over Upperlands

The Glen man was making his second debut for the Strollers. 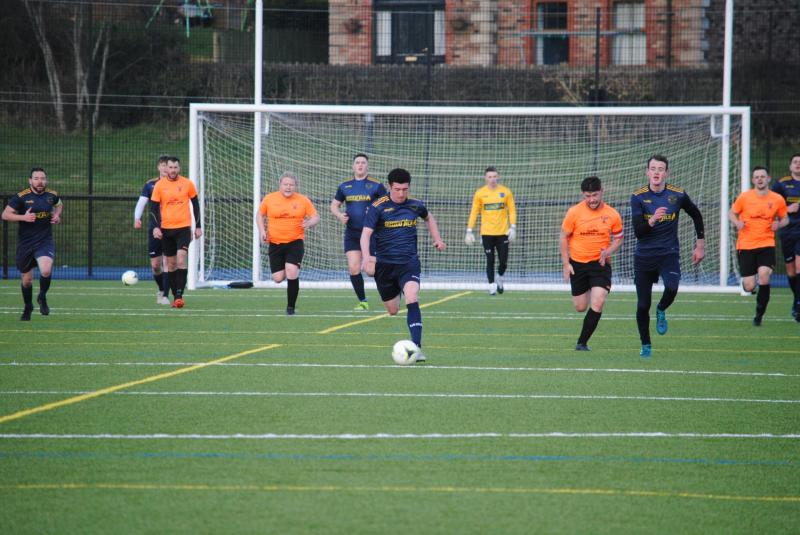 Tiarnan Flanagan goes on the attack for Maghera Strollers.

The Strollers returned to action on Saturday following the Christmas break and recorded an impressive 6-3 home victory over neighbours Upperlands FC despite being 2-0 down at half time.

The Strollers started brightly and should have had a penalty in the first few minutes when the Upperlands defender handled on the line but the referee waved play on.

With 20 minutes gone Seanny McGroggan found himself through on goal but was wrongly judged to have been offside. A few minutes later Upperlands should have taken the lead but for a good save from Shaun McNamee in the Strollers goal.

On the half hour mark Upperlands did take the lead with a great diving header from a cross at the back post giving McNamee no chance.

Two minutes before half time, Upperlands should have made it 2-0 when their striker rounded the keeper but from a tight angle, he could only find the outside of the post.

The referee however awarded a corner kick and Upperlands took full advantage, scoring directly from the corner kick.

In the second half the Strollers switched formation and it had the desired effect as Tiarnan Flanagan pulled one back on 46 minutes when he intercepted the keepers kick out and stroked it into the bottom corner from outside the area.

Three minutes later it was 2-2 when Flanagan scored a tap in after being set up by Conleth McGuckian who had made a great run from the right wing.

Two minutes before the hour mark Tiarnan Flanagan, who was making his second debut for the club after returning from a spell at Tobermore, got his hat-trick after being put through on goal with a great ball from Conall Darragh.

On 68 minutes Conleth McGuckian made it 4-2 after he blasted home a rebound after the Upperlands keeper had made a good save from his initial shot. Upperlands pulled a goal back in the 75th minute to set up a nervy last 15 minutes however, Marc Hutchinson made sure of the 3 points when he turned home a Conall Darragh corner with 9 minutes to go.

Two minutes later Flanagan scored his 4th of the day, and a goal of the season contender, when he intercepted a clearance from the keeper and lobbed him from 35 yards.

In the last few minutes Upperlands had the opportunity to grab a consolation goal when they were awarded a penalty but this was blasted over the bar to leave the final score 6-3.

The Magherafelt side are through to the last 16 of the Irish Junior Cup.