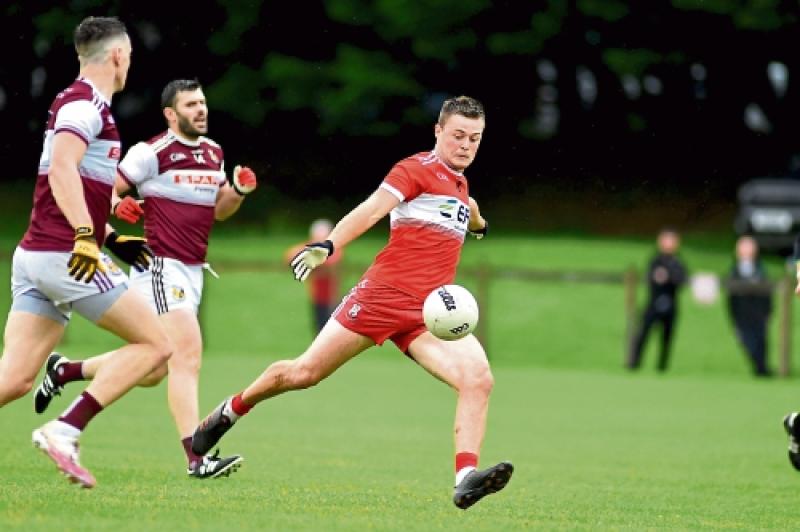 Drumsurn sealed the Division 1B title with a win over Banagher.

As thoughts began to focus on club action and the climax of the leagues, Drumsurn sealed the Division 1B title on the final day, with Christopher Harbinson netting twice in a win over Banagher.

“These boys have put in serious work. The work they have been doing is unbelievable. It is just rewards and it shows they can believe in themselves and it is a big boost for this club,” he said.

Elsewhere, Glen took the Division 1A title after Lavey's loss to Newbridge, while in Division 2, Ballymaguigan pipped Ballerin to the title after they lost to Glack.

Derry minors' grip on the Tom Markham Cup lasted a mere ten days, as the reigning champions were defeated in the 2021 Ulster minor championship by Armagh.

The senior hurlers were handed a chastening defeat in Croke Park, as they lost the Christy Ring Cup final to strong favourites Offaly.

Goals from Gerald Bradley and Odhran McKeever were consolatory against the Faithful, who notched 41 points on the day.

Manager Dominic McKinley said Offaly were more than ready for the step up into Joe McDonagh hurling.

“We were off the pace...it is self explanatory,” he said.

“We set out to try and stay in the game as best we could, not concede goals early on and maybe that was to our detriment because we coughed up seven or eight points with Cormac going slightly deeper.

“The way they played today would indicate that they are ready for that step up. They've learned from last year and if we can learn as much as they did and go forward then we will hopefully be okay.”

The U20 hurlers suffered defeat to Meath in the All-Ireland B hurling final in a midweek clash with Meath.

In what selector Kevin Kelly described as a 'nip and tuck' game, the Oakleafers lost out by 2-19 to 0-19 in the end.

Derry U16 ladies raised the Ulster U16 championship title, driving home 2-3 in a pivotal third quarter in which they had been reduced to 14 players.

The minor ladies then lifted an Ulster title too, with a second quarter blitz paving the way to another win over Fermanagh at Brewster Park, with goals from Kate Higgins, Clodagh Moore and Orla McGeough.

For the seniors, there was heartbreak as they exited the All-Ireland championship at the hands of Wicklow following extra time in Mullahoran, despite 1-5 from Emma Doherty.

Young Desertmartin star Lachlan Murray hit 0-7 on his first senior appearance for the club as they defeated Division 2 title rivals Limavady by 0-15 to 1-8.

Back to back wins for the senior camógs over Kerry sealed an All-Ireland intermediate quarter final tie with one group game to spare, which they duly won over Tipperary.

However, they came up short, losing to Meath in Inniskeen to end their season.

In soccer, Draperstown Celtic recorded a 6-0 win over Maghera Strollers to start their season on a high, and continued their high scoring with a 4-0 League Cup win over Magherafelt Reds.