'Goodbye Dundalk, it's time for me to go home!' 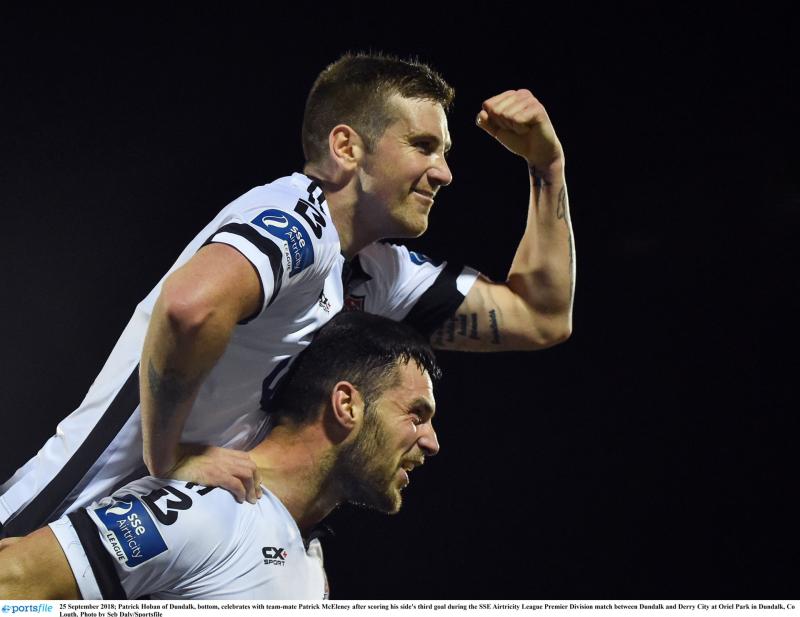 Patrick McEleney will bid farewell to Dundalk this evening. Pic by Seb Daly/Sportsfile

Patrick McEleney will bid farewell to Dundalk tonight, but he is still hoping to write more chapters in what has so far been a career of glittering success.

Ironically, McEleney will bid his farewells to Oriel Park at the end of the game against his new club and hometown team in Derry City. While the Dundalk fans will be saying goodbye, the travelling City fans will be welcoming home a prodigal son in the same breath.

McEleney signed with the Lilywhites in December 2015, as he went on the search for trophies – and in that, he has succeeded. Three league titles, 2 FAI Cups and 2 League Cups have all been won in Dundalk colours, and he has been part of two squads who have made it to the Europa League group stages. For all those achievements, he has a thousand more memories; scoring against BATE Borislov in the Champions League qualifying round, scoring a penalty against Sheriff Tiraspol to help Dundalk qualify for the 2020-21 Europa League group stages, and playing against Arsenal at the Emirates.

Any footballer would be proud to look back on all that, but not Patrick. For him the past is the past, and he wants to achieve so much more now that he is returning to Derry City. If anything, he is even hungrier than he was when he left the Brandywell six years ago.

“It came full circle,” he agrees. “I’m properly excited to kick on with Derry City and I’m really looking forward to it. I’ve been watching them a lot, especially since I’ve signed and I’ve been trying to pick up things. There are some really good players there which I knew from playing against them anyway. I’m really looking forward to next year and getting my family back home.”

“Whenever he contacted me in 2016 he said he really wanted me and he explained how I was going to fit in and how I was going to play. I went down that first year and won the league and got to the Europa League Group Stages and that was surreal to be honest.

“Being in that environment I knew there was only one way it was going and we were going to be successful for a lot of years. I was just thankful to Stephen for the opportunity, but I had no doubts in my own ability and what I was going to be able to do for the team. It was amazing times, but it’s gone now, and it’s in the past and it’s time to make new memories.”

McEleney did enjoy some success with Derry City after arriving back from Sunderland back in 2010. A part of the squad which win the First Division that year, McEleney went on to win a League Cup in 2011 and the FAI Cup in 2012. Since then, Derry City have won just one trophy – the 2018 League Cup, while McEleney has gathered enough silverware to make any other footballer jealous. With the tide changing at the Brandywell in recent months following the return of Ruaidhri Higgins, McEleney is hoping all those statistics can improve. He would oven thing ore than to win wearing the red and white of his home town club.

“Whenever I was leaving Derry at the time, I was leaving home,” he said. “It was no secret about how much I loved the club – I still do, I’m a fan and I still go to Derry matches whenever I can – Even playing against them for Dundalk, I’m not going to lie, it was difficult and it was the same the whole time.

“I knew at the time I had to make the move, and I’m clever in that sense to know what I need to do, My timing has been pretty good so far, maybe apart from my Oldham move, but you live and you learn. To come down here and play in two Europa League group stages and won what I’ve won, was definitely the right thing to do, and I’m sure 98% of people would agree with it.”

McEleney’s final year at Dundalk did not go how anyone expected, with the Lilywhites at one stage looking over their shoulders at relegation, such has been their fall from grace. A new takeover has restored some optimism to the club, but so much damage has been done, proving that in football, success is never guaranteed.

“I could sit here all day and explain a million different things of what I believed happened, but it is what it is,” McEleney states.

“You have to dig deep sometimes and people get things wrong. The players need to look at themselves too. We’re the ones playing and you have to take some responsibility and accountability somewhere. I do anyway. To go from the Europa League group stages to the way it was this year was not good enough and it was a big shock, but we got through it and that was the main thing.”

McEleney’s decision to join Derry City was announced in July, and that did not go down well in some quarters, but there was no doubting the player’s focus, and he starred for Dundalk in the weeks that followed, the stand-out performance coming in the two-goal display against Vitesse Arnheim in August.

“It was a strange situation but I had to do it for a number of reasons,” he admits. “I think a lot of people were going to question of I was going to down tools. From the outside looking in, it might look as if I’m an easy-going guy, and even in the way I play because I can float about, but the people that really know me, know that’s not me. I’m definitely a winner, and I was never going to let anybody question me as a person or question what I was going to do for Dundalk, so it was up to me to put in performances on the pitch in that period of time to make sure no-one would question me. I believe I did that and more.”

McEleney was given a nice send-off by some fans at training this week, and he is sure to be given a huge ovation tonight. It is the end of an era for both he and his family.

“It’s sad,” he admits. “Obviously during the time of it, it can get frustrating and getting the injury it’s hard and you can get yourself down. But now that I’m leaving and I can look back, of course it was amazing what we did, and the success I’ve had here.

“I was training and a fan called me over and said ‘Thanks for everything. You were amazing for the club. We’ll not forget the memories and you go with our blessing’. It was just a nice touch and the club has been the same.

“I can’t thank them enough, for what they’ve done, not only for me, but for my family. My kids were raised here, so it will always have a place in our family, but everything is in the past now. To be successful you can’t really rest. You can’t say ‘I’ve won this, I’ve won that’. It’s time for new things and to be able to do it for Derry would be beyond dreams so that’s the target now.”