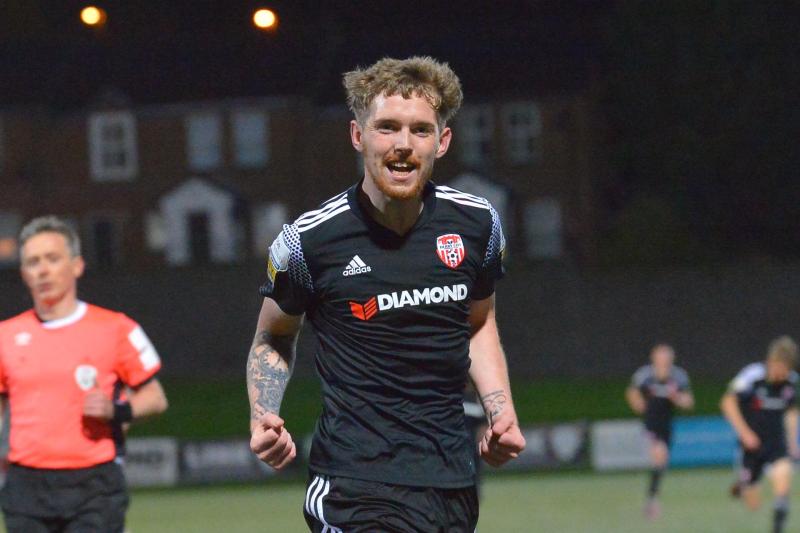 The striker struck either side of half time, with quality finishes to add to keep City’s hopes if European qualification alive ahead of the final game at Dundalk.

A peach of a finish from the striker gave City the lead on 15 minutes. The goal was reward for a positive start from the home side as Joe Thomson set up McGonigle, wh sent a superb left-footed volley past Richard Brush and into the net to make it 1-0.

Liam Buckley could not have been happy with his team at all in a one-sided first half, but his mood almost improved when Sligo created their first chance on 38 minutes, Mark Byrne breaking into the Derry penalty area, but his low effort was parried by Nathan Gartside who stopped the shot with a strong right hand.

Gartside came to Derry’s rescue with an even better save five minutes later. Sligo were pushing hard for an equaliser before half time and they very nearly got it when Walter Figueira’s corner found the run of Garry Buckley at the back post, but the defender’s downward header was brilliantly stopped by the City goalkeeper.

For all that Sligo pressure, it should have been 2-0 Derry City at the break, as McGonigle was able to race completely free through on goal. The striker showed tremendous poise as he dinked the ball over the oncoming Brush, but Lewis Bank was there to stop the ball on the line, much to the disbelief of the City fans.

Lewis Banks then performed more heroics at the other end when Brush was caught in no man’s land trying to challenge Akintunde in the air before McGonigle rounded him and got away a strike that was denied on the line by the right back.

Derry eventually doubled their lead in sensational fashion on 75 minutes. Will Fitzgerald ran at the Sligo defence and crossed the ball, only for Garry Buckley to head it away. The ball fell out of the sky straight onto the foot of McGonigle who lashed it powerfully beyond Brush and onto the top corner for 2-0.