Cameron McJannet promises players will be ready for Northwest derby 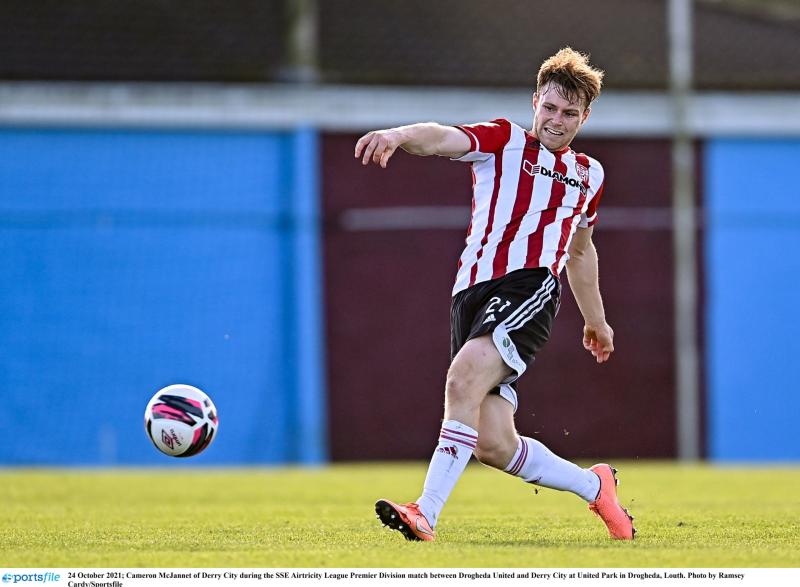 Cameron McJannet insists that Derry City players have to be ready for an ‘absolute fight’ at Finn Park tonight, with both teams desperate for the three points on offer. Kick off 7:45pm.

The defender, who rescued a point for the Candystripes with a last-gasp equaliser at Waterford on Tuesday night, also did Finn Harps a big favour by denying the Blues two big points.

Despite earning a lot of plaudits this season, Harps have found themselves in the relegation play-off place with just three league games remaining, and McJannet’s goal could be as big as any in their season.

The defender is only interested in how he helps Derry City however and he admitted that his goal was a bittersweet moment.

“It’s nice to get another scrappy goal and save a point but on the whole we’re all a bit disappointed because that second half performance wasn’t good enough,” he said. “In the first half we’ve gone behind from terrible goals from our point of view so all in all we’re a bit disappointed. But it’s football and you have got to try and take the positives and we’ve walked away with a point when we probably, if we’re honest with ourselves, didn’t deserve one.”

City gave themselves a mountain to climb by conceding two first half goals at the RSC, and that proved to be too much to come back from, with another two points dropped meaning City are now six points behind Sligo Rovers in third. It is now just one league win in five for Derry, who likely need maximum points from their remaining games to scrape into the automatic European places.

“They have scored really early,” McJannett reflected. “We haven’t come out of the traps and haven’t dealt with a ball across the box, and then the second goal which they have scored from a set-piece is unacceptable from our point of view. We kept going and that’s what we keep doing and we got a point at least.

McJannet’s goal was City’s sixth past the 90-minute mark this season, and followed just days after Ronan Boyce grabbed a late leveller against Bohemians at the Brandywell.  Those goals saved two points when City might easily have had none.

“It’s a great trait to have, especially when you’re not performing like we weren’t,” McJannet agreed. “We keep on doing that, which we’ve done the last two games, but we would rather be in control and not score these late goals. We want to walk away more comfortably, but that’s easier said than done.”

Meanwhile, City boss Ruaidhri Higgins believes that it will be an uphill task for his team to finish in third place ahead of Sligo Rovers with just three games remaining. The manager also dismissed fatigue as an excuse at this stage of the season.

“We have full time footballers here and that’s part and parcel of it,” he insisted. “You look at the Championship in England and they play 46 games. You look at Greg Halford and Wordsworth, two lads at Waterford who are hardened League 1 players who have been around and you can see their mentality shining through. We need to man up and recovery properly over the next 48 hours and go to Finn Park and put in a gutsy and brave performance to try and get the three points.

“It will be an uphill task but stranger things have happened. We can’t talk about third, we just have to focus on getting three points against Finn Harps.”