Junior will use 'shameful' abuse as ammunition 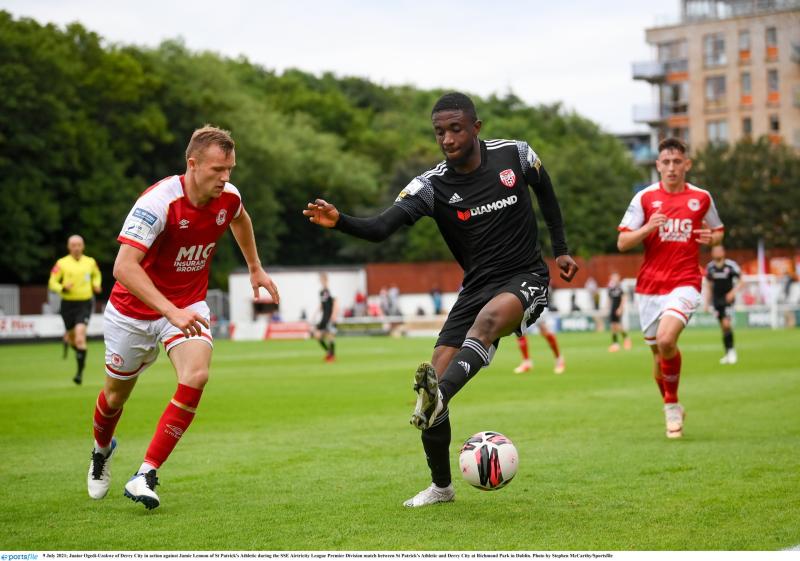 Junior Ogedi-Uzokwe has been the subject of online racist abuse this week.

Ruaidhri Higgins believes that Junior Ogedi-Uzokwe will use the online racist abuse he received this week as ammunition to become an even better footballer.

The striker, who scored in Derry City’s incredible 3-3 draw with Bohemians at Dalymount Park on Monday night, discovered the abuse on his Instagram account after the game. It took the shine off a memorable night for Junior and his team mates, and Higgins described it as ‘shameful’.

“It’s very disappointing,” he said. “I’m sure if you asked James Akintunde and Junior have they ever been subjected to racial abuse in Ireland, I would imagine the answer is no.

“It’s disappointing that it’s happening in this country. Although we’ve had sectarian problems for years and years, I’m surprised this has come up because I think Ireland in general is a really good country for people to come to. I thought we were slightly better than that. It’s absolutely shameful.

“It’s a private so you can’t get to the bottom of it, but I think something really badly needs to be done to make these people accountable for their actions. It needs to be sorted.

“There are idiots everywhere you go in the world and obviously this idiot thought it was a good idea. It’s shameful and it is something that shouldn’t be happening in any place in the world, never mind in our country in 2021.”

Higgins has backed his striker to bounce back from the racist abuse, believing he will use it as an incentive to get better.

“He’s a strong character,” he continued. “I’ve had one or two chats with him since. He’s a really strong character that’s one thing about him. “He’s a brilliant person around the group and I don’t think this will set him back; I think he will use it as ammunition. He’s a great lad and he just gets on with it and he shouldn’t be subjected to anything like that.

“From a football perspective, he’s had eight starts for us and scored four goals and his all-round play has been excellent as well. He has been a great addition to this group, everyone loves him here.”

The abuse diverted the attention from one of the games of the season in the League of Ireland, with City coming from behind to lead 3-2 before Georgie Kelly’s sensational equaliser earned the home side a point.

“It was a brilliant game of football,” Higgins agreed. “It was a really good game of football but it’s just devastating when you get to the 95th minute 3-2 in front and you don’t win the game. Massive credit to our players for what they delivered on the night and although we probably could have done better with their goals, I just think what the players produced with their energy, desire and quality attacking play, I’m still very, very proud of their performance. They are giving everything for this club.”

City host struggling Longford Town tonight, but Higgins has warned against any kind of complacency going into the game.

“Longford beat Dundalk in their last game, and they had 9 men for a long period in the game,” he pointed out. “If you look at Longford’s results this season, whenever they have been beaten, they have very, very rarely been hammered. They have been in the vast majority of their games, right in it until the death.

“I know their manager and he’s a really good person and manager and I don’t think he’s gotten enough credit for the job that he has done, especially when you take into consideration the budget. They have put it up to everybody this year and if we think we’re in for an easy ride then we’ll get beat, but if we respect Longford the way that we should, and we approach the game with a positive mindset then I think we can win it.”

Cameron McJannett and Danny Lafferty are both available for selection after missing the game at Bohemians, but Joe Thomson serves the second of a three-match ban. Higgins believes that the point against Bohs will only be considered a good point if they beat Longford.

“We’ve taken 14 points from our last 18 against difficult opponents and I think that’s an absolutely brilliant return,” he explained.

“We were obviously extremely disappointed we didn’t win the game the other night, but for that to be a good point, we need to go and win on Friday night. We’re at home, we’ll have an attacking approach and we’ll try and excite people and win the game.”