Manager Boyle 'proud' of his winners 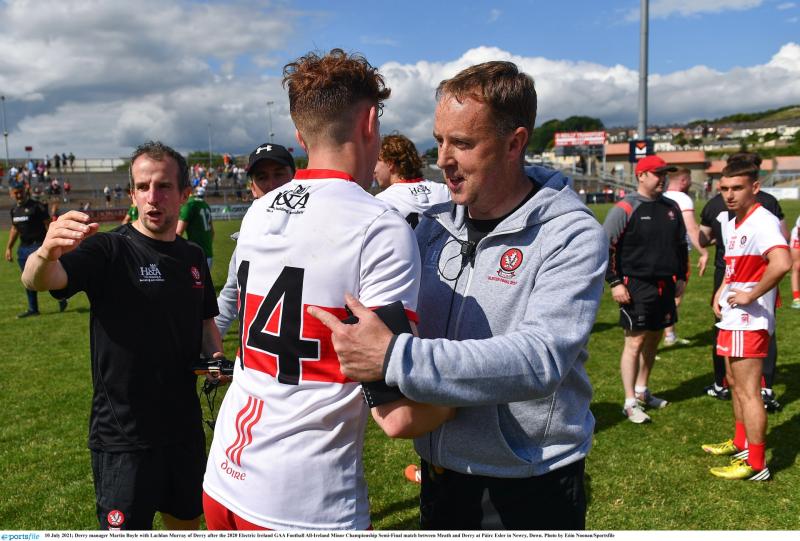 Derry minor manager Martin Boyle knows exactly what it means.
This past week has not been about basking in the achievement of reaching an All-Ireland final, it's about making sure that come that final whistle today, the trophy is in red and white hands. Only then will he and his players be able to reflect on just what they have overcome on the road to the final.
“It's something that you dream about,” he said. “You know the magnitude of a statement like that - “You're in an All-Ireland final”. We have only a week to prepare and we need to get up to speed so there's no time to dwell on the fact that we're in an All-Ireland final. Them boys will demand that we win it so we have to get as prepared as possible because that's three big, big games on the stretch and they have come through them all, so they'll be sore.”
If you're looking for a definition of modesty, you'd find go a long way to find a better example than Boyle.
In the aftermath of winning the Ulster minor championship he parked his own joy into a introduction of a four-minute interview.  The rest, he trumpeted the players and their families.
It was the same on Saturday last in Newry.  The planning and scouting that went into decommissioning a mighty Meath side nobody will ever see.  Every angle was covered.  Every nugget of information was pulled from anywhere.
With a six and seven point at times in the final quarter, surely that's the embodiment of the work satisfaction as a management.  The moments that make the hard yards all worth it.
“These boys manage themselves,” Boyle said.  “They set the standards, they set the tone, they set everything...They manage themselves.
“We've very little input into them.  They are just winners,” he added.  “They are so mature, driven, proud Derry men who want to achieve in the red and white of our jersey which is great to be associated with them in some small part.  You let them at it and they deliver time and time again.”

Reshuffle
Recently, on the same day Lachlan Murray had his red card overturned, Sean Deehan had his cruciate operation and players all chipped in with good luck message.  Deehan would've been perfect to pick up Eoghan Frayne and in the reshuffle.
“We knew Eoghan Frayne was going to cause us issues and we didn't have any choice,” Boyle pointed out.
“Eoin McEvoy is a top quality player and you'd back him to mark anybody.  He has a big future in the game, so I had no doubt that Eoin would do a job on him, it was just what we were losing at (number) six from having to move Eoin back.
“But Lee Brady gave us serious punch.  We wanted to get him out of the full-back line to give us a bit of punch on the front foot.  It was one of the rare days where the selection works.”
Boyle acknowledged the loss of Conor Gray to Meath's plans and knew it they got the ball in the 'vicinity' of Dan Higgins he fetch kick-outs.
“You are nearly at the stage where you expect it from him.” he added.
The Derry manager admitted that it was a 'content' dressing room at the break, safe in the knowledge that they were creating chances.
“There was no ranting or raving.  We fixed a few tactical tweaks and positional switches,” he said.
The wins over Tyrone and Monaghan in recent weeks stood to the young Oaks.
“We felt that Meath, in recent times, wouldn't have been exposed to that level of intensity that this special bunch here brings, thankfully that's the way it transpired.”