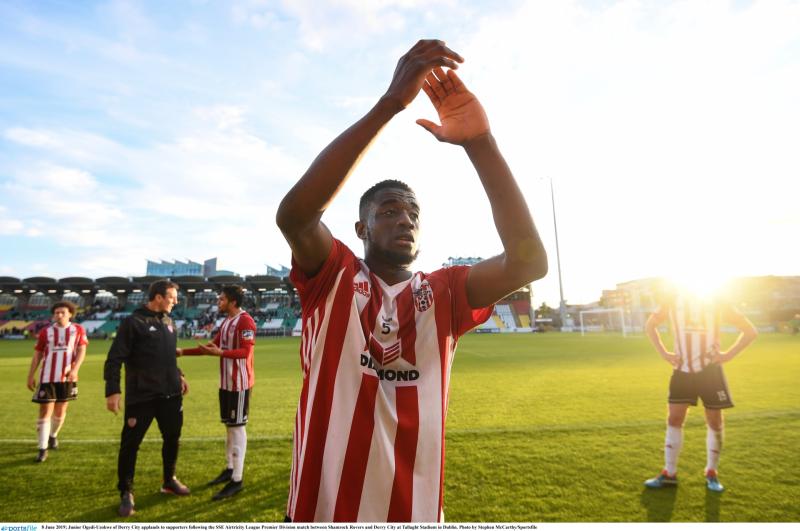 The striker, who won the Golden Boot in his first season at the club back in 2019, has since had spells had fellow League of Ireland clubs Sligo Rovers and Dundalk.

But he has now returned to the Brandywell on loan from Oriel Park until the end of the season.

“It’s a place where I really enjoyed playing my football,” Junior said this morning.

“The fans were terrific so I’m happy to be here. I always liked how the team scored goals and get the three points so hopefully there can be more of that this time around.”

It has been a hectic few years for Junior, but he is now hoping to get back to enjoying his football with Derry City.

“I went to Israel and enjoyed my short time there but Covid ruined it,” he added. “I came back to the League of Ireland and I have enjoyed every club I have played for. I’m just happy to be back at Derry and hopefully enjoying my football again. I can’t wait for the first game and hopefully I can help get the team three points.”

City boss Ruaidhri Higgins is delighted to bring Junior back to the Brandywell.

“Jim Magilton has been very, very good and very facilitating,” he said. “He has a very good relationship with Paddy McCourt here at the club, and the two of them have worked away in the background to make this happen. Obviously Junior is a player I really like myself. He scored against us a couple of times when I was at Dundalk previously and I’ve always rated him really highly as a player.”

Higgins has already added striker Jamie McGonigle to the squad this week and with James Akintunde extending his contract also, he now has an abundance of striking options.

“Junior is a very good player and someone who we’ve spoken about over the last month at the club and we made it very clear he was someone we wanted to bring to the club,” he explained. “He comes in and really adds to our attacking options; he’s a real goal threat and I really look forward to working with him.

“We’re delighted that it’s now done nice and early in the window so we can get on with it. I think it gives us good options throughout the pitch now and we’ll be a real attacking force now.”