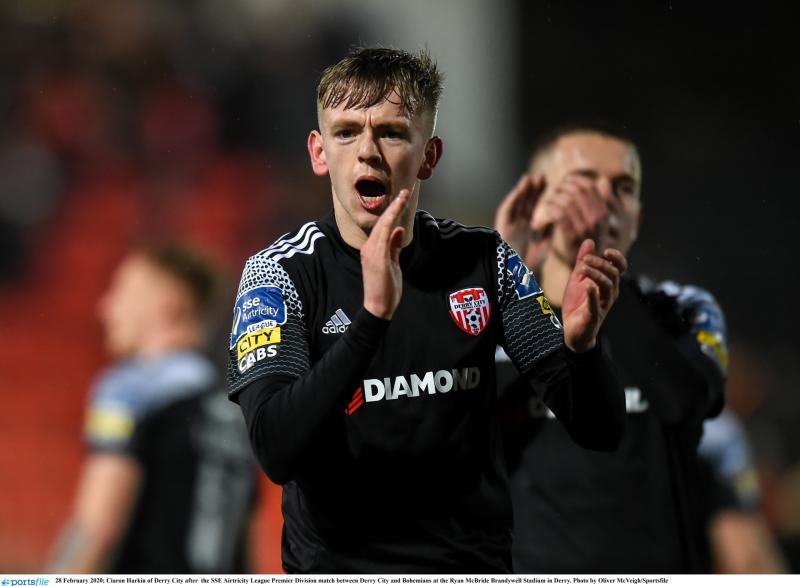 Ciaron Harkin has been a key player for Ruaidhri Higgins in the past two months.

Ciaron Harkin has signed a new two-and-a-half year deal which will keep him Derry City until at the end of the 2023 season.

The 25-year-old has been a regular in the team this season, starting 13 of the Candystripes’ 15 league games so far. Harkin, who was the club’s most used substitute last season, has been in superb form of late and has already surpassed the number of starts he made in 2020 despite being only halfway through the season.

"Since I've walked in the door he has been brilliant,” manager Ruaidhri Higgins said. “You can see him develop week on week but he is also growing as a leader within the squad.

"He's a Derry City boy through and through and to have someone of that quality and with that level of commitment it was a no brainer for me and for the club to have him here for at least another two-and-a-half years."

‘Jackie’, who made his City debut in an FAI Cup tie against Edenderry back in 2015, has made 76 appearances for his home town team and is well on course to hit the century. The midfielder is delighted to secure his future.

"I feel I've been playing well but also that as a team we've been getting better. The fact that the club is now signing players on longer deals is a positive thing for us. It's more difficult when so much is changing every year but I know for me personally I want to keep getting better and repay the manager for his belief in me."

"Hopefully there will be plenty of good things happening here over the next few seasons and I'm delighted to be part of that."