Brett McGinty makes it 2-0 after dominant display in Coventry

Former Oakleaf boxer turns on the style for watching fans 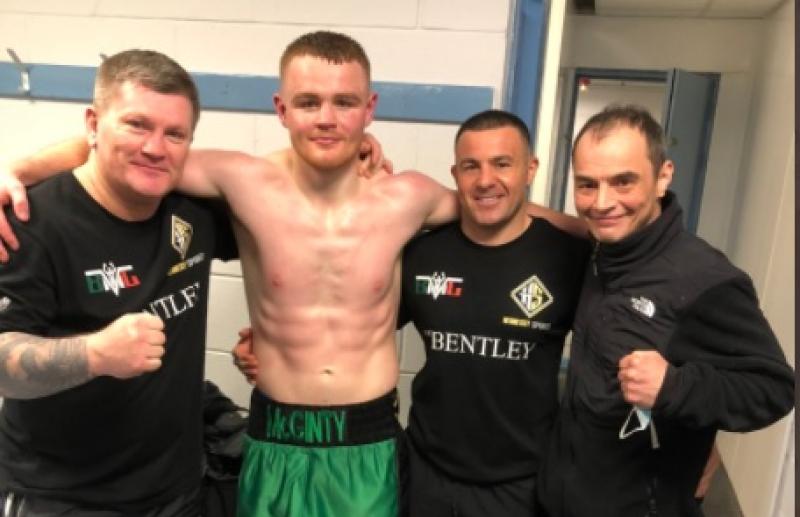 Brett McGinty made it 2-0 in his professional career as he dominated Dwain Grant in Coventry this evening.

The former Oakleaf boxer was in splendid form and determined to put on a show for his watching fans, dominating from the first bell on the way to an impressive victory.

McGinty was the 40-36 winner on the judges’ score cards come the end of the four rounds, and he achieved the margin by using his jab, but especially good shots to the body throughout.

“There’s still tons to learn and improve on, but I was really happy with the performance,” he said afterwards. “It was great to have my fans in the arena. I really missed them on my debut and it was fantastic to have them here. I can’t wait for my next fight.”

"This felt like the debut I never had. It is a weird experience fighting in front of nobody, hearing the slap of the shots; the only positive is that you can hear the corner better. It was a great feeling walking out and hearing the Irish crowd for the first time as a pro; you would have thought there was a lot more of them here than there was, but that was them making a lot of noise.

"I’m really happy with it. It was a lot better performance than on my pro debut. I was talking all week about improving every day and I think that showed. There’s obviously a lot to work on, but slowly but surely we’re getting there."