‘The 1980s glory years moved people to their core, it shifted mindsets’ 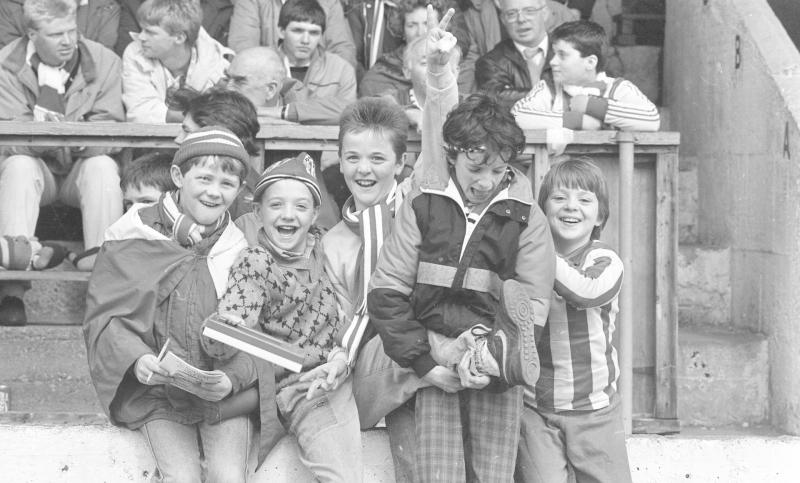 Derry City fans enjoying watching their local team back in the late 1980s.

The man responsible for the brand-new film about Derry City’s re-birth in the League of Ireland in the 1980s has admitted that he has been making the film in his head for over 30 years.

Film Producer Guy King has spent the past year making the documentary-style feature, called ‘Different League- the Derry City Story’, which will premiere tonight on BBC1 at 9pm.

‘Bombscares, Benfica and the Brandywell Stadium’ is the story of a community that needed to catch a break and how its football club, exiled from the league for more than a decade, was brought back from the dead.

Originally from Glenarm in County Antrim, Mr King moved to Hatmore Park in Derry as a youngster before making his home in London. He was part of the huge ‘Red and White Army that accompanied the Candystripes around Ireland in the mid-to-late 80’s. And it was here that his fascination with the Candystripes began.

“When I came to Derry I was ten years of age,” he recalled.

“The kids on the street had just won the Hatmore Cup playing for Hatmore Harps. And everybody was talking about Owen da Gama and Alex Krstic. They would ask me if I was related to Noel King. ‘Who’s Noel King?’ I would say. And I would think to myself ‘Why do they love him so much?’. So in a weird way, I’ve been making this film at the back of my head for more than 30 years.”

‘Different League’ tells the background to Derry’s expulsion from the Irish League days and how they burst onto the League of Ireland scene in a blaze of colour, seen through the eyes of several key personnel.

Different League: The Derry City Story follows the club through those exciting years, managed by distinguished managers such as Noel King and Jim McLaughlin and showcasing a stellar line-up of players from around the globe including the legendary Owen Da Gama and Alex Krstic as well as local heroes such as Paul Carlyle and Liam Coyle.

“When I started going to the Derry City matches Owen was in his last season at the club and Noel had already left, so I got to see the Treble but I’d missed the peak ‘carnival’, as it was called,” Guy says.

“I do remember one game, when the visiting manager walked across the Brandywell pitch to the bench wearing a big full-length Colombo coat and someone whispered ‘That’s Noel King’ as if he was royalty. So I was always interested in what I’d missed out on, what the ‘carnival’ had been like, and why people were so nostalgic about it. That’s what the first half of the film is about, and then we look at the Jim McLaughlin era up until the Benfica game.”

Transitioning from imagination to screen was a long time in coming, but it was an idea that Guy could never quite let go of.

“I was making a film called Border Country: Ireland Was Divided and during the research period, Derry filmmaker Sean Mullen told me all about the Gang of Four and how they had come up with the idea of Derry City playing football across the border. I thought it was a terrific story but that it probably needed a film of its own,” he explained.

“I had no idea if anybody was interested. One day I took a long list of ideas into the BBC and the one they were most keen on was my Derry City idea. Probably because they don’t get a whole lot of feel-good ideas out of Northern Ireland, and when you haven’t heard the whole story, it is quite amazing: for Derry to go from having no team for 13 years and no hope of having a team, to playing in the European Cup at the Brandywell on national television…and this happened in a five-year period.

“If you look at the pitching documents we sent to the BBC, they are surprisingly similar to the film that came out the other end.

This was our big sell: “A story of four ordinary men defying the system, against all odds. All they wanted was for their city to have a football team again. Their crazy idea changed the city and the country forever.” This is a good description of what you’ll see on Monday night. I’m not sure how much the return of Derry City ‘changed the country’, but it certainly had a positive social effect that reached far beyond the walls of the city.”

Guy is the first to acknowledge the help he has received locally in bringing his project to reality, with the Derry City story quite fittingly a real team effort.

“We made the film in four stages,” Guy continues. “Myself and two producers (the brilliant Vinny Cunningham and Farah Qayum) talked to as many players and fans as we could in lockdown; we had a two-week research trip in July to meet people; we filmed in August; and then we had a long editing period for the next lock-down. So I’m very grateful for the summer period where Covid when there was almost zero in Derry. We still had to follow all the BBC protocols but we got enough good material when we were able to.”

The documentary-film is sure to take City fans back to an extraordinary time in their club’s history, and revive memories of a unique period for Derry as a whole.

“The thing that struck most last summer was that when people say football is spiritual, it can lift you higher – they’re not joking,” Guy continues.

“The 1980s Glory Years moved people to their core, it shifted mindsets. A Creggan woman told me that she has two distinct compartments in her head: a dark one for memories of the Troubles, and a colourful one for her memories of going to the Derry City matches.

“The whole experience had a fundamental impact on that way people saw themselves and how the outside world saw Derry. I loved playing football my whole life, but I never really understood what being a proper football fan was all about. It’s about more than football. I think I can see that now, and I hope people who normally hate football watch the film and see it a bit differently.

““Here’s a story I love: when things were at their most stressful for Jim McLaughlin before he won the Treble, he carried a poem around in his pocket. The poem was ‘If’ by Rudyard Kipling with lines like this: “If you can dream—and not make dreams your master… If you can keep your head when all about you Are losing theirs and blaming it on you, If you can trust yourself when all men doubt you.. If you can meet with Triumph and Disaster And treat those two impostors just the same… You’ll be a Man, my Son!” It’s fantastic to think of him deriving strength from a poem like that when the chips were down.

As any Derry City fan can attest, there is rarely a dull moment when it comes to Derry City, and right from the off in 1985, the excitement, the drama, and the controversy began.

“I’d have loved to include some of the finer details, such as how Jim McLaughlin recommended Noel King for the job of manager in the first place, and then a year later it was Noel suggested Jim come and join him, a decision he famously lived to regret,” Guy says.

“At the time, the fall-out between the two men split the city, but history will judge them both to be superheroes. That’s the way I see it. They both dared to dream: Noel thought that along with Jim, they could take Derry to success on the European stage. And Jim was talking about winning the Treble long before they did.

“Everyone was thinking big at the time, that’s what made that era special. The sky was the limit. And that’s what the film portrays: by getting to the top of the mountain, Derry saw a new view over the horizon. The team lifted morale in a way nothing else could have done at that time in its history.”

“A couple of the songs were composed especially for the film: one is ‘Daughter Dear (City Till I Die)’ by Jonny Nutt and the other is Strength NIA’s ‘Owen Da Gama’ which is coming out on a record soon.

“It was Rory Moore from Strength NIA who first told me about Owen Da Gama because he lived across the street from us when we were kids in Hatmore Park. So there’s nostalgia for you.”

Different League: The Derry City Story by State Of Grace and Stray Bear Films, will be broadcast on BBC One Northern Ireland tonight at 9pm.