Two defeats from two for Derry City this season 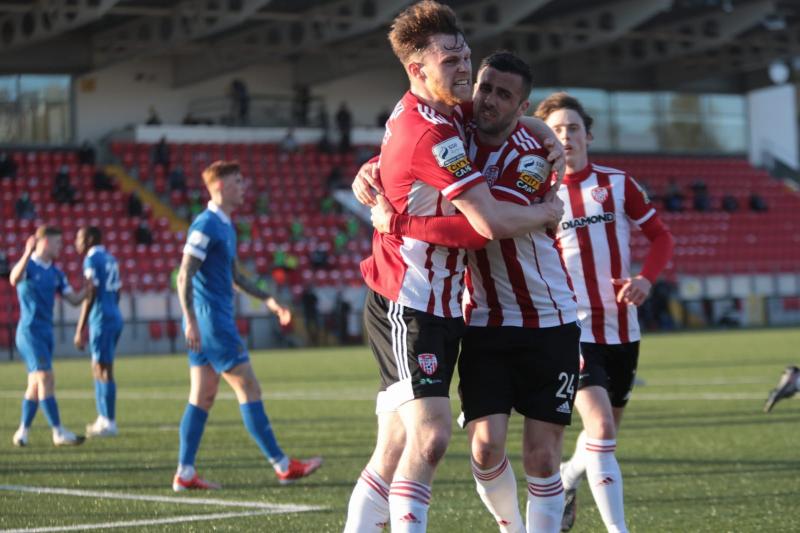 Derry City could not find a way through as they fell to defeat against 10-man Waterford at the Brandywell.

It is a first win in three for Kevin Sheedy’s team, while it is yet more misery for Declan Devine and his team who have lost both games this season so far, despite a dominant performance here at home.

Waterford really threw a spanner in the works on 30 minutes as they took the lead against the run of play. Joe Thomson hacked down Shane Griffin 20 yards from goal and the Waterford man picked himself up to curl the ball beyond Nathan Gartside and into the net to make it 1-0.

Derry City grab a deserved equaliser before the break. Waterford were proving vulnerable down that left side and City won another free kick in a dangerous position and Patching again delivered another dangerous ball. This time it paid dividends as it found Cameron McJannett completely free in front of goal and he couldn’t miss as he fired in his first Derry City goal.

The game swung Waterford’s way yet again on 51 minutes when Gartside fouled James Waite in the area, giving referee Rob Harvey an easy decision in pointing to the spot.

Oscar Brennan stepped up to take the spot kick and although his effort was saved by Gartside, the rebound fell right back at the feet of the Waterford man who fired into the empty net for 2-1.

City responded well and could have levelled within minutes as a cross from the right found Joe Thomson unmarked but his half-volley was brilliantly pushed away by Murphy.

Waterford were repelling everything Derry City were throwing at them, but their task became much more difficult on 80 minutes when Brennan, who had been cautioned just moments before, went in late on Patching and saw red, leaving his team down to 10 men for the final 10 minutes.

Waterford were hanging on by their fingertips and City could have levelled late on when Danny Lupano met a Patching corner and saw his header crash back off the crossbar, the defender holding his head in his hands as a result.