Former Oakleaf boxer finally gets his shot after six-month delay 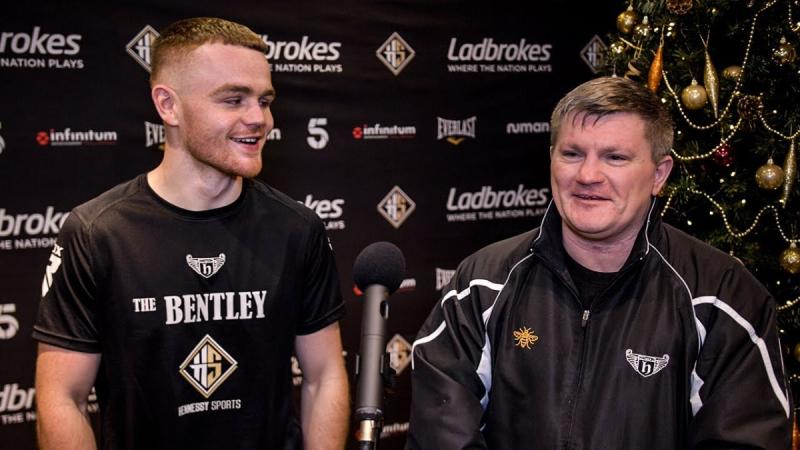 The wait is finally over for Brett McGinty, who makes his professional debut in England tonight.
The former Oakleaf boxer will be a part of a Channel 5-televised show promoted by Hennessey Sports in Redditch, 9 whole months after his original debut date was scrapped due to the coronavirus.
The 21-year old St. Johnston man has been far from idle in the meantime, despite that disappointment, and has spent the last few months training with former 3-time World Champion Ricky Hatton in Manchester.
Hatton's hard-hitting style is the perfect approach for McGinty, and a big reason why both hold each other in such high regard.
McGinty also signed with LA-based Sheer Sports Management in September, and while there has been little action in the ring, it has all been happening outside the ring, with his new management company and his new coach all readying the eight-time Irish champion for his pro debut.
"I would say there will be some parts of my style similar to Ricky's,” Brett said. “He would even say that himself. He was an aggressive fighter, I'm an aggressive fighter.
“All throughout the amateurs, I was always a come forward fighter. I was very rarely on the back foot. He was always trying to back opponents to the ropes and work to the body and that will be very similar to me, so there's definitely similarities between the two of us and there's no better man to be learning from.
“It was a great opportunity to work with someone who has been there and done it, in the ring himself and as a coach. I'm looking forward to the start of what hopefully will be a successful journey.”

Fans back home
There will be plenty of interest in McGinty's first pro fight back home in Derry and Donegal. While fans cannot travel to support the young boxer in person, he will be cheered on vociferously by those who helped carve his path to the professional ranks over the past 11 years.
Oakleaf coach Eugene O'Kane believes that big things lie in store for Brett in the coming months and years.
“This is the big one now and the one he has been waiting for,” he said. “He has been training away with Ricky Hatton in Manchester and he's just waiting to get into the ring now.
“The only downside is that we can't go over there and support him which is a pity. There will be other times however because he's got a big following in Derry and Donegal. Once these restrictions are stopped he will be a big crowd puller.”
O'Kane has watched on as McGinty has grown in stature and reputation over the years and under Hatton's guidance, he has no doubt that the light middle--weight is on the right path.
“He has absolute dedication and commitment,” he continued. “He's whole-hearted and he gives 100% always. He's a non drinker and a non smoker and Hatton thinks he's one of the best prospects he's ever had. That's a good compliment coming from a two-time world champion.
“He came into us at 10 years of age and he went on to win eight Irish titles, from Boy 1 right through. We've put in a lot of work with him, especially my son Eugene 'Budge' O'Kane and they are very close friends now. There's a lot of people who have followed his progress and everyone is looking forward to this on Friday.”