Carn Wheelers clean up in Donegal 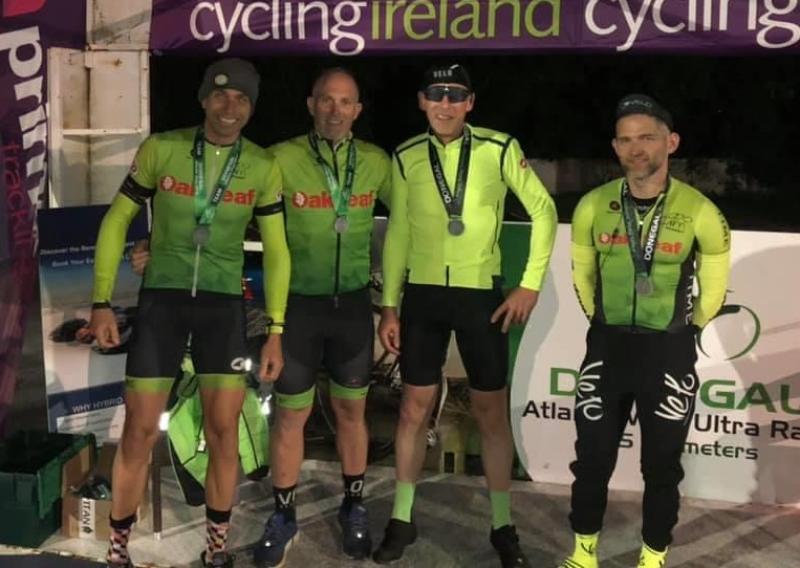 It was a weekend to remember in Donegal for Carn Wheelers, as two of their ultra racing teams came home with both gold and silver.

The club's four-man team, led by Dean Lockhart, won the Donegal Atlantic Way Ultra 555 road race. What made the feat even better, they smashed the record with a time of 16:22:24, which was no mean feat especially with windy conditions on the mostly dry rugged roads of Donegal.

The route follows 555km (345 miles) of the Wild Atlantic Way around the rugged and beautiful coastline of Donegal.

The Carn men left from Letterkenny and took on some of the most scenic roadways to be found anywhere in the world.

The Maghera-based club's success didn't stop there. The two-man team of Tony O’Doherty and Dunloy’s Adrian McGregor, finishing the elite challenge in second place with an impressive time of 17:48:15 over 346 hard miles.

In, what was a very close battle, both men showed extreme grit and determination right to the very end.

“Congratulations and well done to Tony and Adrian,” PC concluded.

Switching from the tarmac and into the mountains made little difference, as Ryan Skelly and Ben Wilson headed to the Virus First Track Enduro series in Wicklow.

Conditions were poor to say the least however both guys came away with the overall win just 0.12 seconds ahead of second place in what was a very tight race.

Cookstown Harps' John Morton was the winner of Thursday night's race on the Curran circuit, which saw four Carn Wheelers finish in the top 10.

The top ten finishers were:

The club wished to thank everyone who took part, to the marshals and the lead car. Carn's last race of the season will take place tonight (Tuesday).

At last week's West Tyrone Road Race, Carn duo of Curtis Neill and Travis Harkness have certainly ruffled a few feathers this year, as they have consistently had top ten finishes.

Curtis had an excellent third place, with Travis in close contention in fifth place at the final round of the West Tyrone RR series promoted by Omagh Wheelers on the McCann cup course with the finish on Sionfinn hill .

The club congratulate these two young lads as no doubt they have a bright future in the sport.