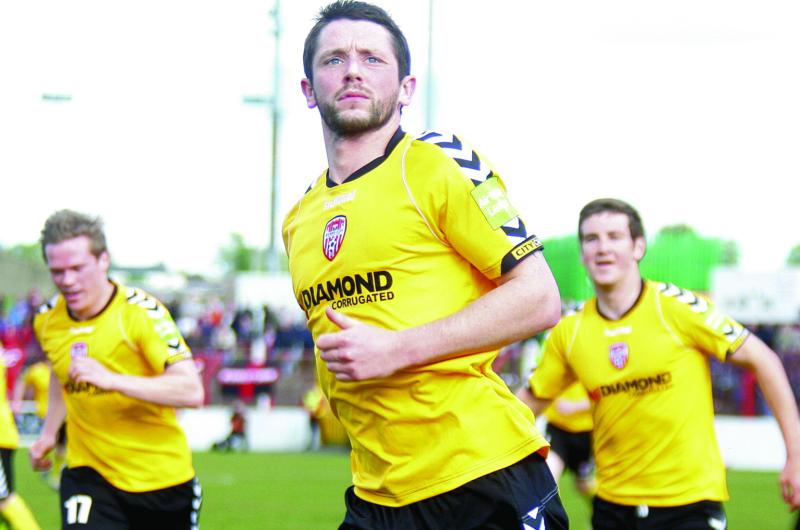 Rory Patterson celebrates one of his goals in the Setanta Cup final.

Derry City fans will get a chance to relive a big match in the club's history this weekend.
EirSport have been showing a number of classic matches from the Setanta Sports Cup to keep SSE Airtricity League fans entertained. With SSE Airtricity League football postponed until June due to the COVID-19 crisis, the TV channel have made a number of classic matches available in their schedule. Over the weekend, eirSport will screen back-to-back finals with the 2011 final between Shamrock Rovers and Dundalk, and the 2012 final between Crusaders and Derry City on Saturday evening.
The game between Derry City and Crusaders at the Oval ended in a 2-2 draw, with the Belfast side emerging victorious in a penalty shootout.
On Sunday, the 2013 final between Shamrock Rovers and Drogheda United will be screened first, followed by the 2014 final between Sligo Rovers and Dundalk.
The game between Derry and Crsuaders is certainly worth watching again.
However, the match did take a long time to come alive.
Derry striker Rory Patterson smashed in the opener in the 80th minute but Colin Coates levelled with an 85th-minute header.
Stephen McBride was sent-off in added time before Coates gave the Crues the lead again in extra-time, but Patterson scored from the spot to equalise.
Gareth McKeown scored the winning penalty after three players had missed.
For Derry, Patterson, Ruaidhri Higgins, Barry Molloy and Patrick McEleney found the net with their spot-kicks but Owen Morrison and Dermot McCaffrey failed to convert.
Morrison missed the target while Sean O'Neill saved from McCaffrey.
Coates, Chris Morrow, Matthew Snoddy, Stuart Dallas and McKeown were successful with their penalties for the Crues, with only Ciaran Gargan being denied by Ger Doherty.
Both sides were taking part in the final for the first time and Crusaders were aiming to become the first Irish League side to lift the trophy since Linfield won the inaugural competition in 2005.
Derry were missing several key players as Stewart Greacen, Kevin Deery and Mark Farren were all carrying injuries.
Brothers Shane and Patrick McEleney returned to the Derry line-up.
With the game deadlocked following a very entertaining 120 minutes, the shoot-out went the way of the north Belfast side, who claimed their second trophy of the season and the winner's cheque which was worth £40,000.