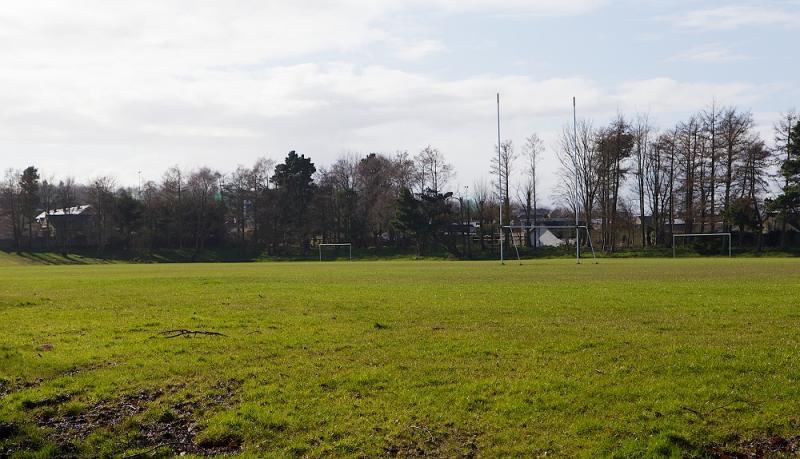 ABANDONED...An empty Lisnagelvin playing field, which is just one of many sporting facilities closed until further notice. Pic by Tom Heaney, nwpresspics

A city which has sporting success sewn into its very fabric came to a standstill at the weekend, with the sports calendar postponed for the foreseeable future due to the spread of Covid-19.
From football to rugby, from gaelic to athletics, nothing has been left unaffected in recent days, with a packed weekend schedule wiped out completely as clubs and organisations decided to call a halt to proceedings due to the fears over the Coronavirus.
Derry City's game against Sligo Rovers at the Brandywell was one of the first casualties as the FAI postponed all League of Ireland games until March 29, while Institute's game against Cliftonville at the Brandywell on Saturday was also cancelled, with the Irish League set to revisit the issue on April 4.
Derry GAA also suspended activities at all levels, with the Oakleafers' game against Longford called off 'until further notice' due to the Covid-19 outbreak.
The Irish Football Rugby Union also called a halt to all domestic rugby, which prevented City of Derry from fulfilling their fixture against Sundays Well at Judges Road, while the annual popular St. Patrick's Day 5k was also cancelled.
With Derry City and Strabane District Council closing all local pitches and council facilities, the Mintbet.com Saturday Morning League was also called off.
Forthcoming sporting events have also been struck off despite being weeks away, with the Bay Road 5k, set for April 8, cancelled, and the Buncrana 5k, set for May 20, also postponed.

Uncertain
It is an unusual time for all sports men and women throughout the country and City of Derry's Gerry Lynch admitted that the decisions to postpone or cancel events have been difficult but extremely necessary.
“From a running point of view and a sports point of view in general it's the right thing to do,” he insisted.
“We're all uncertain over how long it's going to last so sports people and runners in particular and clubs will do what we think is for the greater good, which is call off events and encourage runners not to train in group situations. We all hope that the solution will be found sooner rather than later given the fact that there have been some major events already called off.
“You don't realise how much sport influences on your life until it's all taken away but we have to do what we have to do. I drove to Gransha for a run and the absence of runners on the roads was noticeable. There were less than a dozen runners out and about so it is having an effect.”

Future plans
The uncertainty of how long this crisis will last will have an effect on the future plans of some runners locally, with the London Marathon put back until October with the Rotterdam Marathon likely to follow suit. There is no event nor any individual excluded from the severity of this outbreak, meaning uncertain times ahead.
“Life goes on and you have to take the rough with the smooth,” Lynch continued. “Injury can happen and illness can happen at any time in an athlete's career but this is outside the understanding of most of us and it will be a matter of doing the right thing, and making the right decisions.
“In the absence of any clear cut advice, it's best to err on the side of caution.
“That's what we have done, by calling off the run at the weekend, by calling off the Bay Road in April and calling off other events.
“We just have to watch this space and see what happens. Some of these events may not take place at all this year if this continues longer than we would like it to.”