Eglinton's Orla is ready to take over at Euros 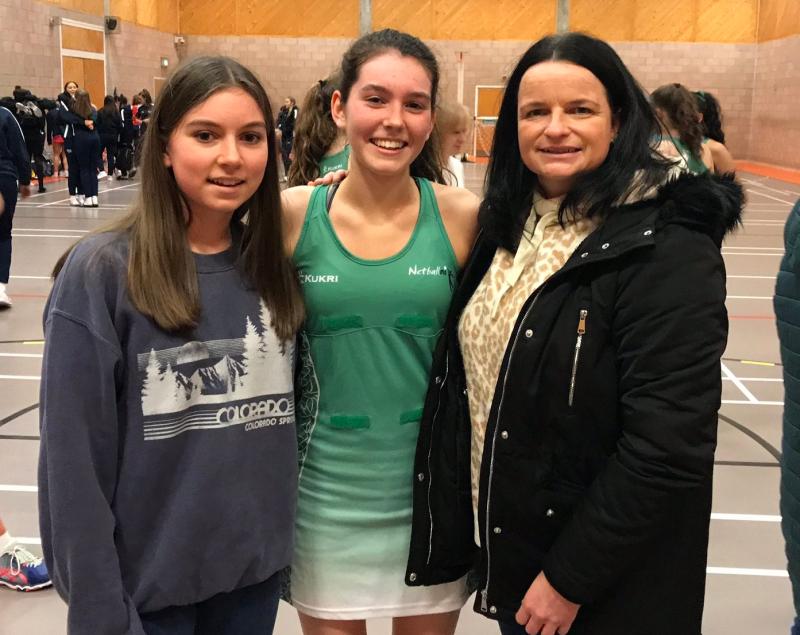 Orla McGeough (centre) will be part of the Northern Ireland netball team competing in the U17 European Championships this weekend.

Eglinton netballer Orla McGeough is relishing the opportunity to play against some of world netball’s finest upcoming talent when she plays in the U17 European Championships this weekend.
The Lumen Christi student has been selected as part of the Northern Ireland team that will take on England, Scotland, Switzerland and host nation Wales in the tournament, which runs from Friday to Sunday.
The journey to the Euros is one that started at a young age for Orla.
“I first played netball when I was at Broadbridge Primary School. Mrs Carmeline Ward and Mrs Katrina Gillespie gave up a lot of their time after school coaching and encouraging us,” Orla told the Derry News. “We were lucky enough to win a Northern Ireland Championship when I was in primary seven.
“I now play netball at Lumen Christi where Miss Fleming, Mrs Deery and Mairead Hull continue to support and coach me. “

DELIGHTED
Although she has been involved with regional development squads before, Orla said it was extra special to get a call-up to play in a prestigious international event.
“Netball NI invest a lot of time in developing players from a young age and I was part of the under 13 and under 15 regional development squads. Going down that pathway, and a bit of hard work, has helped me in now being selected on the under 17 team.
“I found out that I had been selected after a weekend of matches against the British Colleges team and, obviously, I was delighted to know that I had been successful.”
This weekend’s trip will bring a host of new experiences for Orla and her team mates, but she insisted that the main target is to soak up every moment and leave everything on the court.
“I am really looking forward to playing against top class netballers from England, Scotland, Wales and Switzerland. This is my first opportunity to play internationally and it will be a great experience. We will have tough matches but I am really excited to play against these high level teams.
Orla continued: “It’s great being part of a team and there is a great spirit within our group.
“It’s important we all try to lead by example and encourage each other when we are playing.
“We have been training hard in preparation for the Europeans. We will take each game as it comes and hopefully be successful in our matches.”
Netball isn’t the only sport in which the talented teenager has excelled, also playing on the highest stage in both Gaelic football and hurling.
“Last year I played Gaelic and camogie at county level. This year, I am playing camogie for Na Magha, and Gaelic at county level and for Steelstown,” she explained. “The competitions are spread throughout the year and they all complement each other, enabling me to continue to play all the sports I am involved in.
“I have to give priority to the various sports at different times throughout the year. Thankfully my Na Magha and Steelstown coaches have been very understanding.”