Terri storms through the 'greatest challenge' of her life 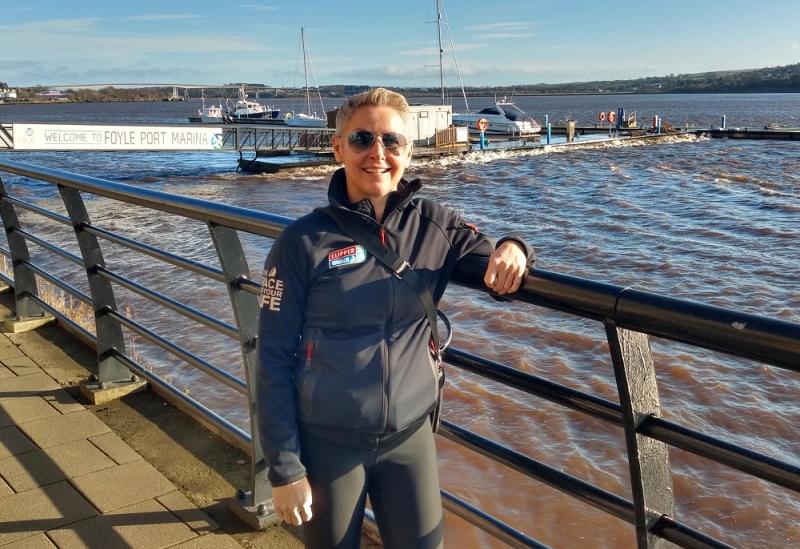 The quay of the River Foyle where it began and where it will end. Deciding to sign up for the Clipper Race in 2018 when the famous boats docked into the Foyle Marina, Terri Fisher will finish “the greatest challenge” of her life when they dock once more in the city in August of this year.
Terri completed Leg 3 of the current Clipper Race in November, from Cape Town, South Africa across the South Sea, “the Mount Everest of sailing” to Fremantle, Australia. Her boat and crew, named the Ha Long Bay, Vietnam, are currently leading the race following the gains they made during that leg.
Terri cannot wait to get back on board for Leg 8 this summer from New York to Bermuda and across the Atlantic to finish her part in the race on the River Foyle, docking in the city’s marina in August.
Following the breakdown of her marriage in 2018 Terri says she "had something to prove” to herself. A chance encounter with crew members on a girls night out in the Carraig Bar provided that challenge.
“There were a lot of girls I spoke to that night had similar stories; their partners had died or a big catastrophe had happened, they found themselves needing something.”
A little worse for wear, Terri claimed she was going to sign up for the race, “come back when you're sober,” they told her. “I woke up the next morning and I literally had a fire my belly. I went and signed up, was interviewed the next day and had my contract signed the day after.”
Seeking thrills is not new to Terri, as she is someone that has always loved outdoor pursuits and as a gymnastics coach at Twisters has always kept herself fit.
The reality of how tough this challenge would be however, came during training at Cape Town. “It was totally overwhelming, week 1 and 2 is death by task, 18 hour days.”
Terri explains that the intensity of training is there to weed out those that think it’s a holiday, “It is not a holiday. I was wondering have I bitten off more than I can chew,” she remembers. Once past training though, the skippers make sure crew members can play to their strengths, “as I’m smaller, I have a lower centre of mass, it makes it easier for me to do certain jobs.”

Professionals
The skippers of each boat are professionals, crew members have either recreational experience or not, “I am not a sailor,” Terri emphasises. When the race began however she says her confidence soon grew and quickly learn to, “eat, sleep, sail, repeat.”
With 65 crew members to a boat, there are around 20 of a crew at any one time. “Bonding happens very quickly, getting changed in front of people, sitting together for long shifts and having a bit of banter,” relationships quickly form and crew members “have each other's backs,” Terri recalls.
With their boat out ahead and a higher number of members without sailing experience, Terri says they are gaining a reputation, “as underdogs we are getting the support of other boats.”
There are a lot of Irish members on Terri’s crew, including 65-year-old Derry man Gerard Doherty, together they are facing up to the challenge of the race.
“It is what it is’ has become a saying on our boat,”
The thought of winning the race has them determined, - “in the last week [of each leg] it becomes very competitive, ‘whatever it takes’ is another motto.”

Mindful
The Clipper Race has had casualties in the past and Terri says she is very mindful of the dangers, “I think I have a very healthy respect, although most of the dangers are below deck. A lot of people get hurt below deck not up above. With no safety lines below deck you can easily be flung around.”
She recalls one instance of above deck danger, “they don't like to do things at night because of the low visibility but something needed doing and I was able to bear-crawl across the deck, a wave came across and I came close to being swept over.”
Perhaps her greatest fear though was the knowledge that a hurricane awaited the crew on Leg 3. Looking out at a wall of seawater and torrential rain, an existential challenge came for Terri, “I remember my heart telling me not to go above deck and my head telling me your team need you.”
With so many in such a confined space, crew members cannot be precious, “you try to have some dignity at the start,” but when things don’t want to stay in the toilet, Terri says the idea of privacy doesn’t last long, “I remember trying to get dressed, one hand on the boat, one hand to change, a leg wedged for balance and clothes wrapped around my ankles, I just started to laugh. Shouting to god, I just want to get changed!"
Looking ahead to her next leg, Terri flies to New York in June, “I have already achieved what I set out to achieve, doing this race is the toughest thing I have ever done in my life.”
The thought of seeing her friends, family and half of the city welcome her home as the Clippers’ pull into the Foyle Marina and the possibility of her boat winning the race in London is what drives Terri on.

Support Terri
The Clipper Race is raising money for Unicef, each crew member has to raise £1100. You can support Terri at justgiving.com/fundraising/ clipper-racejosh. Having been given a space to teach students in Derry, expect to see 50 of the city’s children dance to Ha Long Bay, Vietnam’s official song ‘Whatever It Takes’ by Imagine Dragons as the Clippers’ sail into the city in August of this year.