The dark clouds forming over Judges Road on Saturday morning proved to be a precursor to tidings of the worst kind as City of Derry now face a battle against relegation. 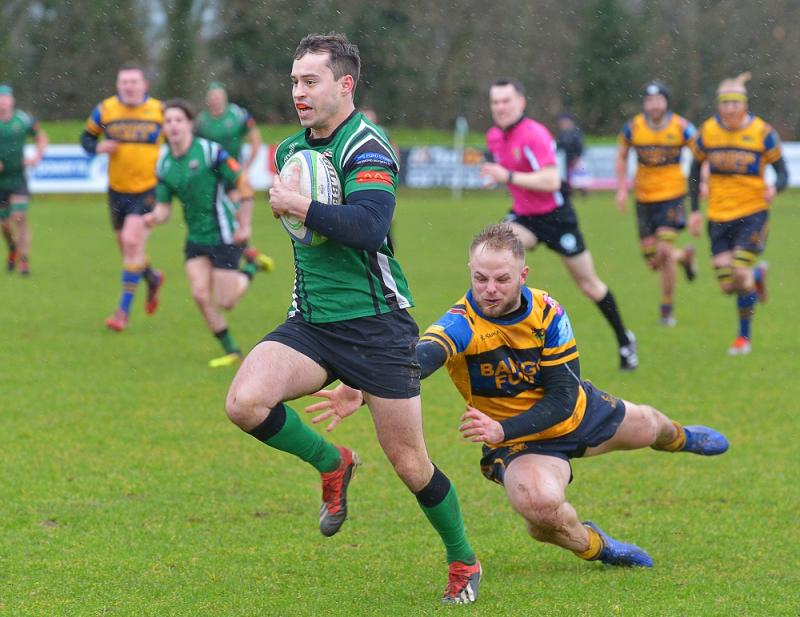 Simon Logue on his way to score a try for City of Derry.

The dark clouds forming over Judges Road on Saturday morning proved to be a precursor to tidings of the worst kind as City of Derry emerged from rain, wind and hail to the realisation that they are now facing a battle against relegation.
For so long now, the condensed nature of Division 2C has meant that any team able to find a consistent run of form could race right into the play-off places and even beyond, and any one of six teams all had hopes that they could be the ones to break free.
City of Derry were as optimistic as any of the others, and after defeating Bangor on the last day of November, there was genuine hope and even expectation that a play-off place was possible. But just one win in five league games since then and the league table is now taking a different picture, and it is not particularly palatable for Paul O'Kane, Richard McCarter and their players.
McCarter said in the build up to Saturday's game against Bangor that the league table was to be avoided because of the psychological implications of seeing his team second from bottom, despite playing well in recent games. Four points on Saturday would change everything however – Derry would rise three, four or maybe five places, above Bangor, away from second bottom, away from relegation fears. They just had to win.
They didn't.
As Storm Denis raged across the skies, all Division 2 games were called off, bar two, with the Judges Road surface holding up. Unfortunately, that durability only suited Bangor, who used the conditions as part fo their game plan, and did damage in the first half that the hosts could not recover from.
The absence of prop Sam Duffy was ultimately pivotal for the home side as Bangor used their physical superiority to dominant up front and get just enough points needed to get a hugely valuable win. That victory would have been much more emphatic oif not for some heroic defending by the hosts, who also suffered from questionable decision making in their own attack which cost them crucial points at crucial moments.
Derry could also look at some harsh refereeing decisions, but at the end of a day in which most things went against them, the celebrations of the Bangor players told its own story. They left the pitch drenched and muddied, but victorious, whilst not even a losing bonus point could console Derry, who will feel building pressure going into this week's home game against Tullamore.
Bad start
Every one of the 21 points scored on Saturday came in the first half and they came early on. Derry, despite knowing the huge importance of a victory, started poorly and were on the back foot from the start. Bangor had a strong wind pushing them on and they held Derry in their own '22 from the off, evengtually getting their reward for their strong start after five minutes.
The visitors pressure told as front row Phil Whyte forced his way over through a crowd of bodies. Rhys Larmour converted and Bangor had the perfect start at Judges Road.
To their credit, Derry responded in the best possible manner as they levelled almost immediately.
The score owed everything to the hard work and tenacity of David Ferguson who took his team forward with a driving run. He was eventually stopped but offloaded to the lightning quick Simon Logue, who eluded a number of challenges before scoring right under the posts, giving Alex McDonell an easy conversion to make it 7-7.
That did not prove to be a precursor to a high-scoring game however, the deteriorating conditions making it difficult for both teams to showcase their attacking ability. It was Bangor who took control through sheer will and they put Derry onto the back foot again as they sought to restore their lead. Mounting pressure from the visitors saw Derry penalised and referee Keane Davison awarded a penalty try and the hosts had it all to do again at 7-14.
The half time break gave Derry a chance to re-evaluate their position and come again, but the worsening conditions only added to the challenge facing them. It was Bangor who had something to hold onto and they emerged after the break to take the game to the hosts again.
Derry were better overall in that second period, but impatience and bad decision making cost them progression and momentum, while at times they had to dig deep to stay in the game as Bangor pushed them right back into their own '22 again. The defence at times was superb, but this was a game that they needed to win, and it just was not happening in attack, each small opening quickly shut down as much by their own play as by Bangor defending.
It was an ultimately frustrating second half, and a result which has serious repercussions for Derry's season. There are now six games remaining and unless results improve Derry will have a very uncomfortable few weeks ahead of them. Tullamore visit Judges Road this week for a game which has now taken on extreme importance for the home side, who have to dig deep, not for the first time in recent seasons, to ensure that the club remain in Division 2C for next season, at the very minimum. At the moment, the weather is the least of their concerns.