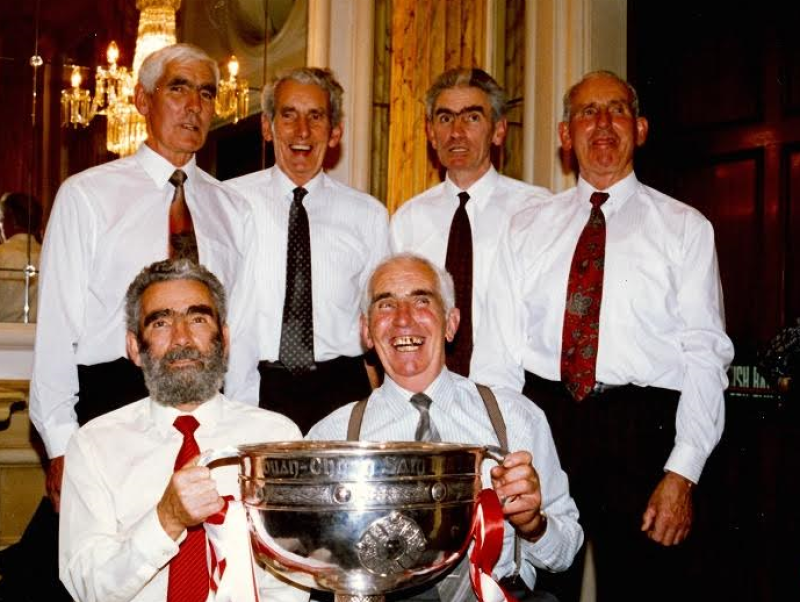 THE Gribbin family bid farewell to Mickey at St Trea’s Chapel Newbridge on Thursday afternoon.  Known locally as Mick, he passed away last Tuesday morning at the age of 85, almost two months after his brother Owen was laid to rest.
Married to Bridie, Mick was the father of Mary, Michael, Robert, Hugh, Barney, Mark, Matthew, Bridie Niall, and the late Peter and John.  He was a brother of Roddy, Hugh Francis, Henry and the late Willie, Owen, Mary, Kathleen and Philomena.
Mick, who served as headmaster of the local Anahorish Primary School had a love of golf and but his real passion was for the GAA.  He had a lifelong involvement, as a player, a coach and an administrator.
“Like his entire family, Mick Gribbin dedicated much of his life to Gaelic games,” read a statement on the official Derry website.  “He was a fine player, a master coach and a pivotal figure in developing Gaelic football in Derry from the late 80s onwards.”
Derry GAA chairman Brian Smith also paid a tribute to Gribbin, describing him both as a ‘fine player’ and a ‘great coach’.
“He was ahead of the rest back in the 1980s” commented Smith, “a great Gael and a great family man.”
Alongside his brothers Willie, Roddy, Owen, Hugh Francis and Henry, he was a regular on Newbridge teams during the 1940s and 1950s – picking up championship medals in 1958, 1950 and 1955.
His playing career was cut short by injury but he played on the Derry team that reached the 1950 All-Ireland junior final.  Francie Niblock’s late goal was controversially ruled out as Derry lost 4-3 to 2-7 at Croke Park.
Gribbin won a Dr Lagan Cup in 1952, following a 1-12 to 2-6 victory over Monaghan in Lurgan – again Mick was in the half back line. Success followed two years later in the final of the McKenna Cup.  Derry beat Armagh (1-8 to 2-4) at Casement Park,
On all three occasions Mick played at right half back on teams that included brothers Owen, Roddy and Hugh Francis who went on to win the Ulster senior title in 1958 on their way to the All-Ireland Final.
Gribbin was a key cog in shaping players on Anahorish, Newbridge and Derry teams during the 80s and 90s.  There were not many players he didn’t know of and followed their progress to university GAA where he was a regular attender of games.
A trusted confidant of manager John Joe Kearney in Derry’s 1989 All-Ireland minor success, alongside Willie Hampson and Mickey Bradley (Ballerin), Gribbin was highly respected and a fountain of knowledge in football circles.
“His party piece when addressing a group of minors was to put the pencil in his beard,” recalls Derry journalist Bernie Mullan. The landmark game in that season was an enthralling Ulster semi-final against Cavan and Eunan O’Kane’s inspired comeback.  It was followed by wins over Armagh and Roscommon before overcoming Offaly (3-9 to 1-6) in the All-Ireland Final. From that side Gary Coleman, Declan Bateson, Anthony Tohill, Eamonn Burns, Karl Diamond and Dermot Heaney went on to win All-Ireland senior medals four years later.  Mick is pictured above with his brothers and the coveted Sam Maguire trophy.  Also, when Derry won the Ulster U21 that same year, Gribbin was still on board under Kearney’s management. “He was one of those men, passionate about coaching and had everything down to a tee,” explained Willie Hampson.  “He would have compared the 1990 team and 1989 teams - who would make the panel and how many would make the team.”
Gribbin’s quiet demeanour didn’t change in the dressing room or on the training field as Hampson explained: “He had a great way with the lads and had them all on board – he was very good at what he did.  He had a great rapport and everyone had great time for him.
“There’d be no roaring with him.  He was one of those men who looked ahead and had everything planned.  It was pre-empted and everything was delivered very quietly.”
ADVERTISEMENT
Advertise with Us
ADVERTISEMENT
Advertise with Us