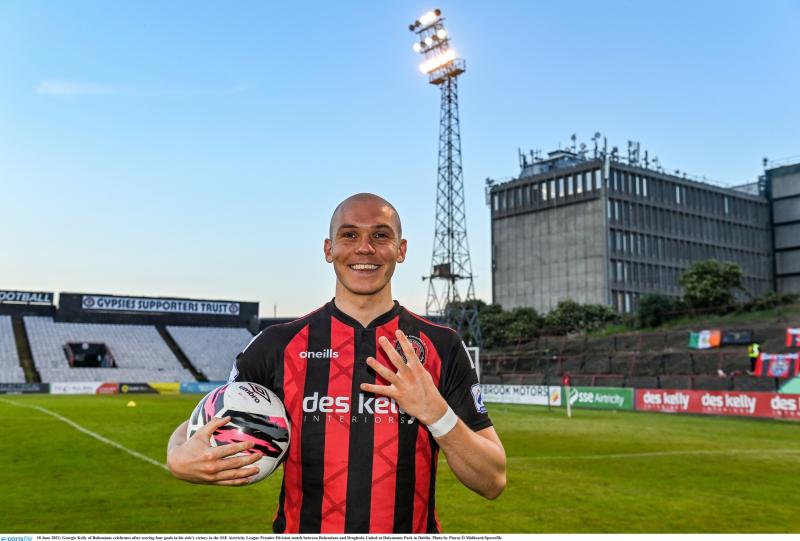 Georgie Kelly has informed Bohemians that he will be making his exit from the League of Ireland.

Kelly, who scored 22 goals in all competition in 2021, is courting plenty of interest from abroad.

The Tooban native was named as the PFAI Player of the Year and will make a move out of the League of Ireland for 2022.

Clubs in England and Scotland are chasing Kelly’s signature, but there has been contact from other counties that have piqued his interest.

Derry City were keen on Kelly, whose time in the League of Ireland began in the Candystripes before he moved to UCD. but the payer will not be staying on home soil.

Central to Kelly’s decision regarding his next destination will be the ability to complete a Masters in Renewable Energy and Environmental Finance, which he is undertaking with the UCD Michael Smurfit Graduate Business School.

He recently told Donegal Live: “I don’t really know what’ll happen next year. It’ll depend on options, being honest.

“I wouldn’t jump at the chance to play in League Two or in Scotland, just to get that move. A lot of players are itching to get away and get the feel of that level. I would be a bit more hesitant because I have the Masters to finish.

“For others, it’s their life and it matters more to them. It depends on what comes up for me and what opportunities are there for me.”