As the SML returns, we look back the best players of the last 17 years 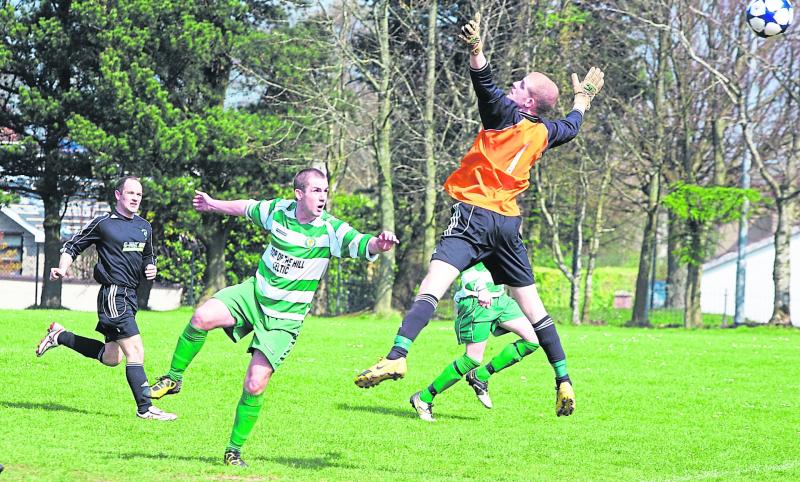 Goalkeeper Ryan McCloskey continues to intimidate strikers to this day.

The Mintbet Saturday Morning League makes its long-awaited return this weekend, and not a minute too soon for hundreds of local football players and fans.

It seems that every other sport has returned in recent months, and with the English and Scottish Premierships also back, that feeling of normality is finally returning.

As per tradition, the new Saturday morning campaign begins with the Gilfillan Cup group stages, and in honour of its return, Derry News Sports Editor Gary Ferry, who has been accused of favouring Clifton Villa, Westbank, Phoenix, Bohemians, Creggan, Brandywell, Abercorn, Northside and Gransha over the years, has picked out the best 15 players he has seen play week in and week out since 2004.
In no particular order of course…

1 – Paddy Tracey, Clifton Villa
‘Paddy, there’s that boy that wrote that thing in the paper about you’.
I was afraid for my life when Paddy glared at me after I had criticised him for being sent off in the Gasyard Sevens, but despite the fact that he could have folded me into the nearest letterbox without breaking a sweat, he has been good craic over the years.
He has won everything there is to win in the local game and now that he’s a manager, he’s threatening to pack it in every time I see him. He’s still going however, and the SML is all the better for it.

2 - Paul Doherty, Bohemians
Paul doesn’t care who he plays for, he just wants to have a ball at his feet.
I’ve seen him play for Bohemians and TOTHC and loads more in between and he still tortures defenders. He has this way of holding the ball up while grabbing a hold of the defender’s shirt that the referees never see.
On top of that, he’s probably the best finisher I’ve seen at this level.

3 - Brendan Elliott, Oxford United
If you tell me there’s a nicer man in local football, then I’ll call you a liar. I worked with Brendy for a few years and even though he is a Liverpool fan, he’s as civil as the day is long.
A centre-half for Oxford and Top of the Hill, Brendy has been a consistent and quality performer over the years, and it’s been a pleasure to know him.

4 - Karl Deeney, Abercorn
Last I heard, and that was a long time ago, Karl Deeney had headed off to America, but I remember him well from my early days covering the league.
A superb finisher for Abercorn, Karl could score goals of every kind. He was an absolute torture for defenders week in and week out.

5 – Brendan McDonald, Trojans
A humble lad, wee Brendy always made sure I put his name in the paper. A consistent performer for Trojans over the years, Brendy was capable of making goals and scoring goals from midfield.
He is no doubt the shortest person on this list, but he was a player back in the day.

6- Liam McGuinness, Brandywell
Wow. That basically sums my feelings up on ‘Big McGinn’. I used to watch him play imagining what it would be like to go into a 50-50 challenge with him, shuddering at the extended stay in hospital I would have afterwards. Has there ever been a more skillful player in the SML? He was built like the proverbial you-know-what, but his ability on the ball was frightening. A quality, quality player.

7 - Ryan McCloskey, Westbank
There’s a saying that all the best goalkeepers are a wee bit nuts, and Ryan McCloskey fits the bill.
If he wasn’t roaring the head off his team mates, he was pulling off miraculous saves. A goalkeeper who scoffed at the idea of actually staying in his penalty area, Ryan is an intimidating presence, because you know he doesn’t care what he has to do, or who he has to go through, to get the ball.

8 – James Boyd, Clifton Villa
Jimmy Boyd was, and probably still is a stunning finisher. He scored some outrageous goals over the years, and was once playing at such a level that I even asked then Derry City manager Peter Hutton about him.
A brilliant player capable of real magic for Clifton Villa.

9 – Thomas Carlin, Northside Albion
On work experience with the Derry News, one of the first games I covered was a Northside game and it was this report which caught the eye of then Editor Garbhan Downey.
I ended up working with Tommy for years, and as well as being the funniest person I ever worked with, he was a solid midfielder with a fierce shot on him. A wile huffer in indoor though.

10 – John Travers, Porters
There have been plenty of big men who have played the game over the years, but few as clinical as John Travers. John scored arguably the best Bronco Bradley goal of all time with one of the greatest volleys I’ve ever seen live, a rocket straight into the top corner from outside the area. A quality player and a gentleman off the pitch, he is fondly remembered.

11 - Stevie Johnstone, Phoenix
One of the best players to ever play the game locally, Stevie Johnstone had and has magic in his feet.
As part of the Phoenix team which won everything a few years back, Stevie conducted everything with his experience and his ability on the ball. His hair got greyer as the years went on, but his brilliance never faded.

12 – Darren McCready, Creggan Swifts
Probably the player I gave most ‘Man of the Match’ awards to over the years, Darren just oozed class every time I saw him on a football pitch.
A class act off the pitch as well, Darren belongs on any list discussing the best players of the past 20 years.

13 – Sean Martin, Bohemians
‘Shorty’ has played for more teams than I can even remember, but he was no doubt a manager’s dream over the years.
A player that you could always rely on, Sean did what he had to do, no matter what the circumstances. A box-to-box midfielder who chipped in with his share of goals.

14 – Ryan McDaid, Clifton Villa
In my early days as a sports reporter, Ryan McDaid was one of the players that stood out as a centre-half alongside Dee McGinley in a dominant Clifton Villa team.
As country as country can be, Ryan can these days be found passing on his knowledge to his son, when he’s not shouting abuse at me as he drives past me down in Culmore.

15 – Darren Cassidy, Bohemians
How could I leave Darren out? A left peg like no other, Darren has been around the block and then some over the years. He is the go to guy for a manager in need of a left winger or full back, and he is still as fit as a fiddle these days. He had one season with Derry City as well, and I dare say there has never been a bad word said about him.

16 – Gary Cassidy, Clifton Villa
Another of those players who any manager would have in their team, there is a reason why Gary Cassidy has played in the best local teams in the past 10-15 years. Comfortable on the ball and a team player through and through, Gary has been a hugely successful player, and modest the whole way through – must be the gaelic player in him.

17 - Calvin Mooney, Phoenix
A player who can do anything with a football, Calvin was one of the best of the last 15 years. I remember giving him ‘Man of the Match’ one time down in Maginn Park, and everyone was grumbling about it, but sure you can't please everyone. A brilliant player for Phoenix.