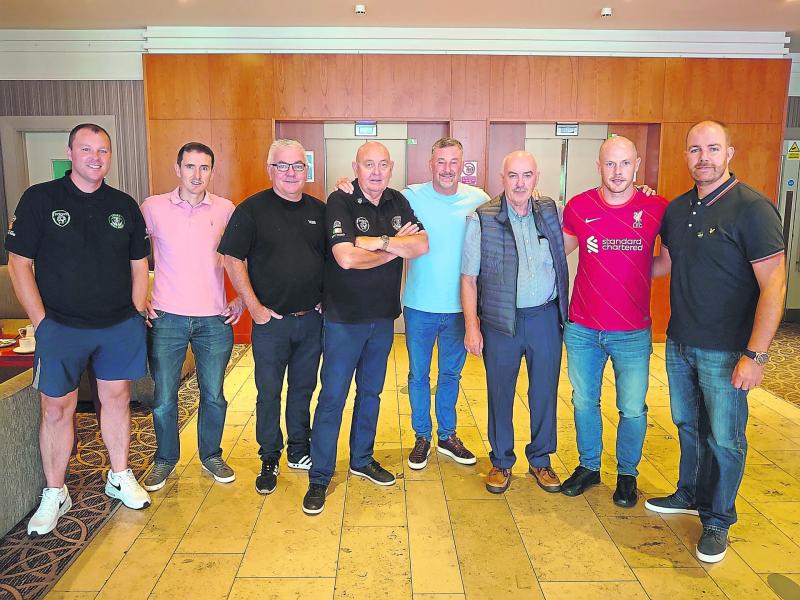 Members of the Derry branch of the Republic of Ireland Supporters' Club with former Liverpool and Ireland player John Aldridge.

John Aldridge believes that Republic of Ireland fans may have to be patient during what he hopes if a transitional period for the national team.

The former Republic of Ireland and Liverpool striker was in Derry as the guest of the local ROI Supporters’ Branch, and held a question-and-answer session for fans at the Delacroix on Saturday night.

Aldridge, who played with Liverpool in the late 1980s and who was one of the stars of Jack Charlton’s Ireland team in the early 1990s, has been unable to get over to Ireland due to Covid, but with restrictions finally being lifted he is able to come and meet fans once again, and there was a whole lot to discuss given the changes in football in the past 18 months.

“It’s really nice to get over to Ireland,” he said. “It’s been that long and I really miss coming over. I would usually come over seven or eight times a year and I love the Guinness over here. We’ve missed so much over the last year and a half.”
Aldridge played almost 70 times for Ireland in his career and he admits he is disappointed in the form of the national team in recent times.

“There are not a lot of things we could say about Irish football at the moment, the way we’ve slipped down the pecking order with the Luxembourg result and the ways things have gone,” he stated. “I find it pretty hard to watch us to be quite honest because I’m not used to watching us getting beat or not winning games. Obviously the passion is still there from the players, but we have just slipped away.

“I hope it’s transitional because we need some young players to come through like Robbie Keane and Damien Duff did and a few of the other lads. Only time will tell. We could have had Grealish playing for us and Declan Rice and you’re looking at a different scenario there because they are two players who could kick us on and drive us forward, but that hasn’t happened and we’re a little bit unlucky on that score, but hopefully it won’t be too long for some lads to be developed and come through to kick us on.”

The Republic began their World Cup Qualifying campaign with defeats to Luxembourg and Serbia, and now head to Portugal in September before home games against Azerbaijan and Serbia. Aldridge believes a difficult spell could lie ahead but he is hoping for some signs of progress in the meantime.

“I think it’s going to be difficult for the moment but hopefully we can see some signs. We have to see signs,” he continued.

“The manager has so much to work with, there is talent there and he’ll do it his way. You can play both ways – Jack Charlton played in a certain manner to suit the team and suit the system and got us to where we needed. Fans will accept that if you have to do it that way, but that’s up to the manager. We all like teams to play football, but sometimes you have to mix it up, it just depends on what you have around you.”

Derry has two local players who are regulars in the Republic squad at present, with Shane Duffy and James McClean now players with plenty of experience on the international stage.

“It's not nice losing your dad and at a young age, and I’m sure Shane will know what it would mean to his dad to kick on and do well with the Republic of Ireland,” Aldridge continued. “That would drive him and his family forward and let’s hope that happens.

“James McClean seems to have been there for a long time. He’s a stalwart and what you see is what you get. He wears his heart on his sleeve and gives everything for his country.

“A lot of the players are like that, where some of them aren’t as talented but they make up for it with their passion and their desire to win for their country.”

Meanwhile, the English Premiership returned at the weekend and after a disappointing defence of the title last year, Aldridge fully expects Liverpool to be challenging this time around. The return of supporters to stadiums could make a huge difference to the players according to the former Liverpool striker.

“I think Liverpool suffered more than anyone because of the passion the fans bring to Anfield,” he said. “In England there is no greater arena – even people like Alex Ferguson have said that. When a team loses five or six games at home – I’ve been watching Liverpool since 1966 – and it was so hard to watch.

“A lot of the problems last year were with the front three. They dipped alarmingly. Salah scored 20-odd goals but he could have had double that amount. He just wasn’t at his level, and if Liverpool are going to win the league this year, they are going to have to be at the tip-top level.

“If the fans had been there that never would have happened, because the 12th man would have picked the team up off their backside so the fans will have a huge bearing on Liverpool, I’m pretty sure.”