'Not about the beautiful game at this stage' - Devine 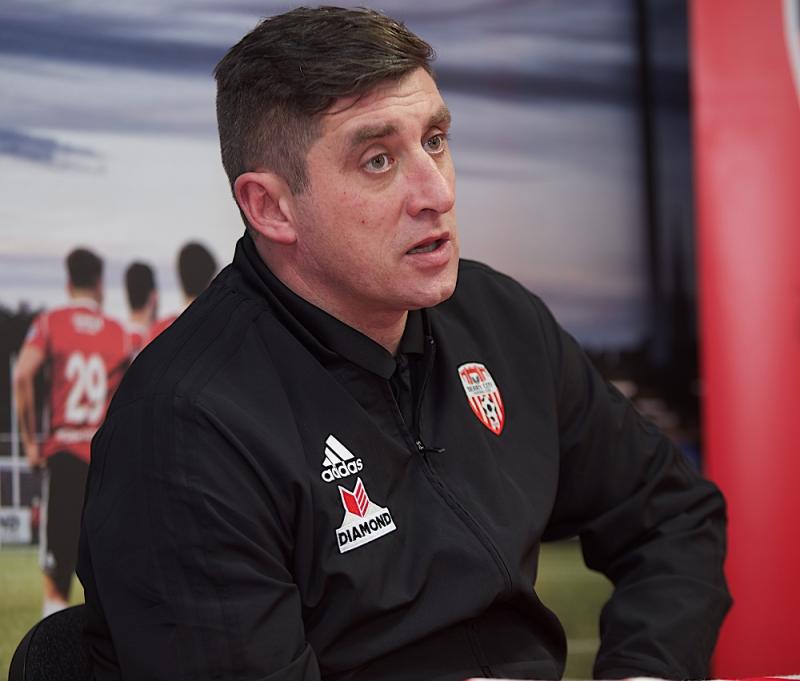 Declan Devine does not care if he has to win ugly as he takes his Derry City team to Waterford tomorrow hoping to pick up the Candystripes' first win at the RSC since 2007.
The City boss is eager to kick on following the win over Bohemians last week, but knows that it will be no easy task winning at a ground that has traditionally been unlucky for his team.
Derry drew both games at the RSC last season and haven't won there since Peter Hutton scored the only goal in a 1-0 win back in April 2007. Each visit brings a new opportunity and on what will be the first Derry game played on grass this season, Devine is hoping for a change in fortune at Waterford.
“There's a lot of excitement but we have got to make sure that the excitement that we are generating is also fulfilled with hard work and the ability to grind out results and that is key at this stage of the season,” he said.
“It's not about the beautiful game to be honest. I'd rather go to Waterford which is a difficult venue and be able to dig out a brilliant win than be very expansive and pretty and lovely on the ball and come away with a 1-0 defeat.”
Waterford are hoping to avoid a third successive home defeat as well as score their first home goal of the season, but Devine is just focusing on his team.
“It's key for me that they continue to trust each other and continue to know each other's strengths and weaknesses and to understand what way we want to evolve as a team.
“It's very much a work in progress,” he explained.
“It was fantastic that we got three points last week but the key now is going to get another three points. It's very difficult, we didn't win there last year, we threw away a 2-1 lead with 30 seconds in the game and we took the lead down there the last time and conceded a poor goal from a corner.
“We didn't win in the RSC last year and we know it's going to be extremely difficult down there this year because they are spitting a bit of fire as well.
“They will be disappointed to have lost their last two, but they also showed a lot of quality when they went to St. Pat's and won 1-0.”

Potential
Devine is excited at the potential in his squad this season and he is expecting big things from the young players going forward.
“It's a very young side – there were five players under 21 who finished the game,” he added. “A lot of them are playing in this league for then first time. The omens are good. I back these players and I back the players with a lot of experience to help these players. We had a great week last week but we now have to try and have another memorable night in the RSC.
“You could go through the Waterford team and there's a lot of talent in there and a lot of experience, but there's also a lot of players who can hurt you if you're not right so we're under no illusions.
“It's going to be a big battle down here. It's our first game on grass so it has the makings of a fantastic game. I know Alan Reynolds very well and he will very determined that they don't lose three home games in a row.”
Ciaran Coll (knee) will have a late fitness test ahead of tomorrow's game, while Ally Gilchrist remains a doubt after suffering concussion against Bohemians.