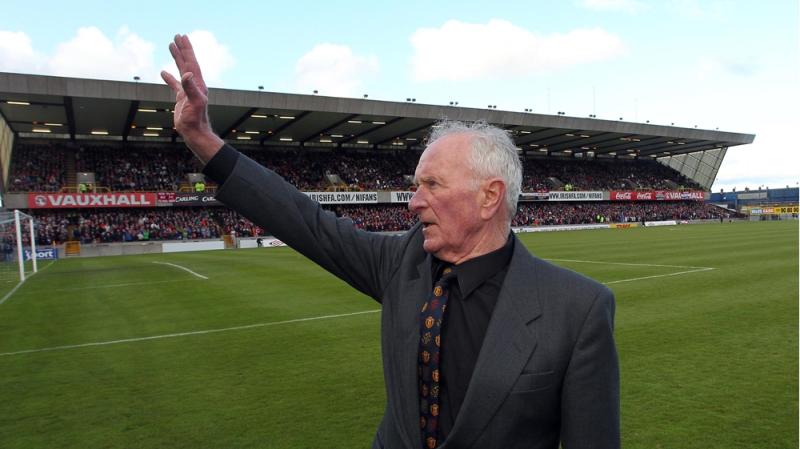 Our sport coverage is brought to you by TJ Hamilton Cookstown

A goalkeeper who was coached by the legendary Harry Gregg says that the former Northern Ireland and Manchester United star was ahead of his time in terms of goalkeeper coaching.

Ryan McGeough was coached by Gregg at Portstewart FC for 'three or four years' as a teenager.

“My mum texted me about his death and I couldn't believe it,” McGeough said.

“I hadn't seen him in a few years and I would have loved to run into him and have a yarn but unfortunately I never got the chance.”

Gregg, who was voted as the best goalkeeper of the 1958 World Cup, a native of Tobermore, passed away at the age of 87 and aside from his talents between the posts he was most famous in football circles for his heroics during the Munich air disaster in February 1958 which claimed the lives of 23 people.

Harry pulled some of his team-mates from the burning plane, after disaster struck on their return journey from a European Cup victory over Red Star Belgrade.

Among those he saved were Bobby Charlton, Jackie Blanchflower and manager Sir Matt Busby.

"Harry played 25 games but was a larger than life presence. Anybody who ever had a conversation with Harry would have remembered it,” stated Irish FA Chief Executive Patrick Nelson in a statement to the County Derry Post.

Gregg started his club career with Windsor Park Swifts, the reserve team of Linfield, before signing for his local club Coleraine.

At the age of 18 he earned a move to Second Division side Doncaster Rovers before switching to Manchester United for £23,000, which was a world record fee for a goalkeeper at the time and made 247 appearances for the Red Devils.

He entered management and became manager of Shrewsbury Town, before taking charge of Swansea City, Crewe Alexandra and Carlisle United.

Gregg also had a spell as goalkeeping coach at Manchester United and as assistant manager at Swindon Town.

Each week the Harry Gregg Foundation facilitates a wide range of activities for thousands of people in the Coleraine area and beyond through participation in football and various other activities. Sir Alex Ferguson, who took his United team to play in Harry's testimonial in Belfast in 2012, paid a tribute on Manchester United's Official Website.

“Harry was a man of great character and a true legend at our club. I remember that he was always very excited and proud to host our youth team at his boarding house for the Milk Cup every summer, so he could recount the tales of his playing days. I loved his company and the many pieces of advice he gave me.”

While back in Ireland, Gregg bought the Windsor Hotel in Portstewart and began coaching the local soccer team.

One player who remembers him fondly was goalkeeper Ryan McGeough who would go on to win two Derry championship medals with Coleraine GAA team.

“He was the (overall) coach but as a goalkeeper you got a lot more attention from him than everybody. He was the first goalkeeper coach I ever came across that made the goalkeepers train with the outfielders.

“Ray Woods was an England capped goalkeeper when (Manchester) United won the league in 1956/57 and they bought Harry for a record fee.

“Harry said to me the only reason why they bought him was that Woods was a 'linie',” recalls McGeough, referring to Woods' reluctance to leave his six-yard box.

“Harry was the first goalkeeper to sweep outside his box and cover for defenders. He would always have had you out in the box organising your defenders.”

McGeough soon learned Gregg's approach to goalkeeping during one of those coaching sessions with Portstewart.

“Peter Schmeichel was my hero and having played European handball, he brought in the 'spreading' himself'”, McGeough continues, explaining the Dane's trademark star-jump, making himself as imposing as possible.

It was by far and away the best coaching I have ever had.

“He dropped the ball and said 'you, dive on it' and 'you (pointing to a team-mate), challenge him. If you do the spread again, you will do this all night. In Harry's era, you dived and took the ball and man.

“It was by far and away the best coaching I have ever had. I haven't spread myself since in case Harry was watching,” laughs the affable McGeough. “He would have taken it as serious coaching a 10 year old as a senior.”

“He taught you how to manipulate forwards on a one on one and force the forward to make the first move. What he was teaching was far and beyond seen before.

“We'd sit around the changing room listening to him for an hour and a half after training. He'd be telling us stories about Best, Charlton and Busby. When you are a big Man Utd head, you are in dreamland listening to him.”

McGeough speaks of how goalkeeping has changed and in the era of televised games too much of the routines being similar.

“In Harry's day there were so many different styles and I would prefer to play the way Harry played.”

READ ALSO - He was larger than life on the pitch.