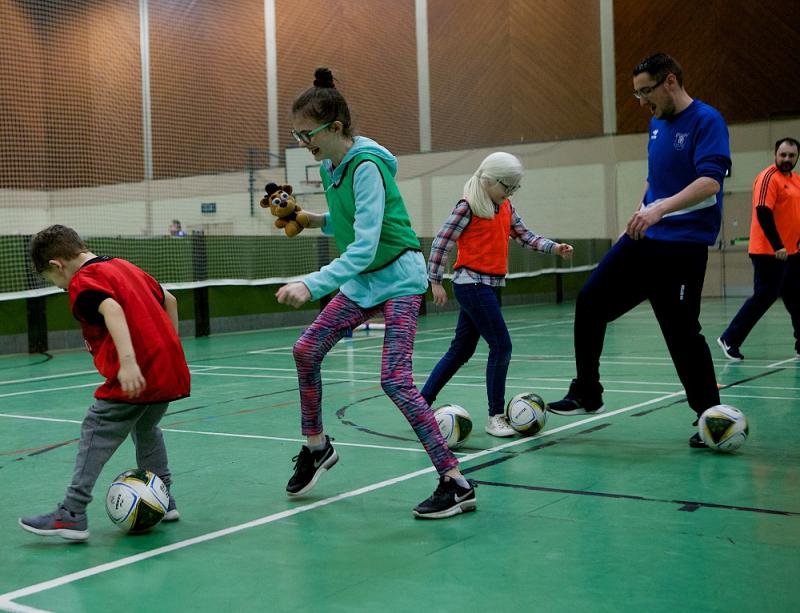 Danny Hutcheson (coach) can't help but get involved in what are fun footballing sessions at Templemore Sports Complex on Wednesday nights.

Trojans YCG coaches are leading the way for visually impaired kids locally, by hosting weekly sessions to help develop their passion for football.
For over a year now, the Creggan club has offered an outlet for local children and parents keen to get involved in football, and whilst the location and personnel have changed over time, the desire to make a difference to local families remains as strong as ever.
Each Wednesday night, at Templemore Sports Complex, Trojans coaches Chris McKeever and Danny Hutcheson host a class for kids with different ranges of visual impairments, the benefits of which include new friendships and new found confidence for those involved.
It has proved to be an exhilarating not just for the young people involved, but for their parents and the coaches.
“Any sort of coaching is good but you get a better feeling from something as unique as this knowing that you are helping these kids,” McKeever said. 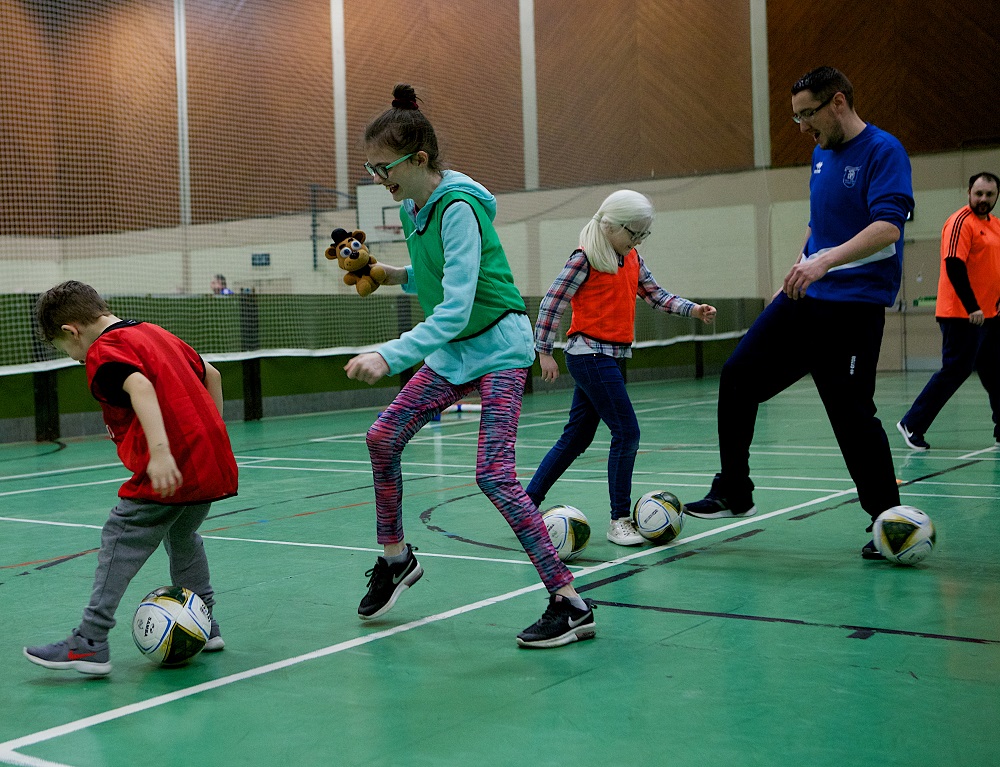 “Sometimes people are a bit wary of it, thinking that because there is visual impairment and because football is a contact sport it might not be the best thing, but the unique training and the way we go about this means that the kids are gaining confidence.
“The parents see that as well and we are always trying to get more kids to come and join in to experience this.”
At present, the Wednesday night session is the only class of its kind in the city, but with the right support, McKeever, Hutchman and everyone at Trojans is hoping that Visually Impaired football can become a permanent fixture locally.
“It's unique to Derry,” Chris agreed. “I know there is Visual Impairment football in Belfast now and that has really taken off.
“It didn't take off overnight however, it does take time and that's what we're trying to get here.
“We need as much support as possible. The parents are 100% behind us and they do see the difference to in the kids that come to us.
“At the minute we rely on a lot of word of mouth. We've been around a few primary schools and we have posters up.
“We are promoting it also on the Trojans Facebook page but a lot of it comes down to word of mouth. We have also been to the RNIB and they have put a poster up in the eye clinic in Altnagelvin Hospital just so people are aware what is there for the younger kids.”
A year in it may be, but the development of the scheme is still in its initial stages and McKeever sees great potential for the expansion of the class, not just locally, but nationally.
“Our aim is just to give kids with Visual Impairment the same opportunity as other kids,” he explained. “In the long term we would love to get a league going if other teams were thinking about it as well. There's no reason why kids with visual impairments can't get into football and learn the sport.
“I'm sure there are kids with us who have brothers and sisters playing for football teams and maybe they feel they can't do it because of visual impairment but if we can get a league going that gives everyone the opportunity. Hopefully that is something we can start to look at from the start of next season, maybe even having a friendly against the team in Belfast, just to get the word out there about it.”

Humble beginnings
Visually Impaired Football first started over a year ago when Trojans coach Gerard Bradley was contacted by his sister Kathleen about the possibility of starting a class for her two children and others with similar challenges. Bradley wasted no time in getting to work and with the support of the Irish Football Association, who provided coaches, equipment and time, the first foray into the world of Visually Impaired sport in Derry began.
Bradley is no longer directly involved in the coaching side, passing the baton onto McKeever and Hutchman but his experience in Visually Impaired football is one which has stayed with him.
“We can taken everything for granted but it's amazing what some of these kids come through,” he said. “The course is going grand and there's a good attendance every week.
“We have specialist footballs which don't bounce but other than that it's just normal football and normal coaching sessions. There are different kinds of vision problems involved. There are also glasses which imitates what someone with visual impairment sees and it really is interesting.”

Sponsorship needed
Trojans are hoping to continue the weekly classes and the help of a new sponsor will ensure that those local kids with visual impairments can continue to enjoy the benefits of their Wednesday night sessions.
“We're keeping this scheme free,” Chris added. “We don't charge the kids coming down but we are looking for as much support as possible if anybody in the community wants to get in contact to offer support. We're trying to keep it a free scheme and we're happy enough doing that but if we were able to get a sponsor on board that would really help everyone involved.”
The VI football training takes place every Wednesday night, between 6 and 7pm at Templemore Sports Complex and is open to all children with a visual impairment.
For more information contact Chris McKeever on 07773099142.