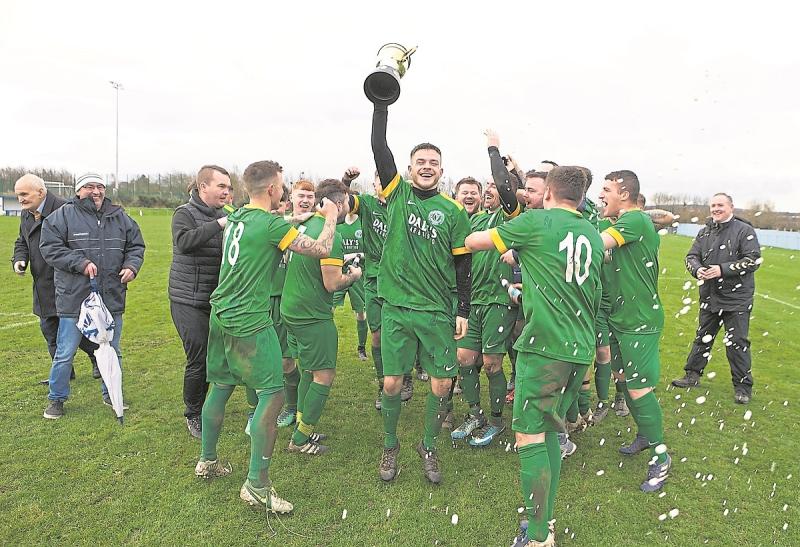 FIRST TIME FOR EVERYTHING… Foyle Harps celebrate winning the Gilfillan Cup for the first time by defeating Clifton Villa 6-1 at Wilton Park.

Foyle Harps have finally got their name on the Gilfillan Cup after they won the trophy for the first time with a deserved, if rather flattering victory over Clifton Villa at Wilton Park.
The final score was extremely harsh on Villa, who conceded three goals in the last five minutes of the game, a disappointing finale after a decent second half display which saw them dig in deep to make this a final worth watching.
Ultimately it was Villa’s poor first half showing which cost them in this cup final, trailing by two goals at the break before a howler from goalkeeper Gary Martin put Harps three goals clear. It should have been done and dusted then but Villa, to their credit, really fought back, and for 20 minutes had Harps panicking at the back. Yet there is no doubting that Harps deserved this victory, their speed in attack, their enthusiasm in going forward and their efficiency in the final third making them a handful for any team, and too often on this occasion, an experienced Villa side were no match.

Early goal
Harps should have had the lead in the opening minute of the game, when a poor clearance from Martin was deflected back into the path of Calvin McCallion, whose cross found Daley Powell just six yards out, but the Harps man could not turn the ball in despite two attempts, with the Villa goalkeeper doing enough to put the ball behind for a corner.
Villa did not heed that warning and Harps’ got their reward for a positive start when Dee Dee Campbell’s cross was met by McCallion, who sent downward header past Martin to give his team the perfect start with just 90 seconds on the clock.
It took Villa almost 20 minutes to get a grip on this game and they almost fashioned an equaliser out of nothing when Neil Harkin’s free kick into the area was punched into the air by Dean Beattie. Paddy Hargan kept the ball alive by heading it down into the area and Eoghan Quigg volleyed the ball right across goal but just wide of the post. 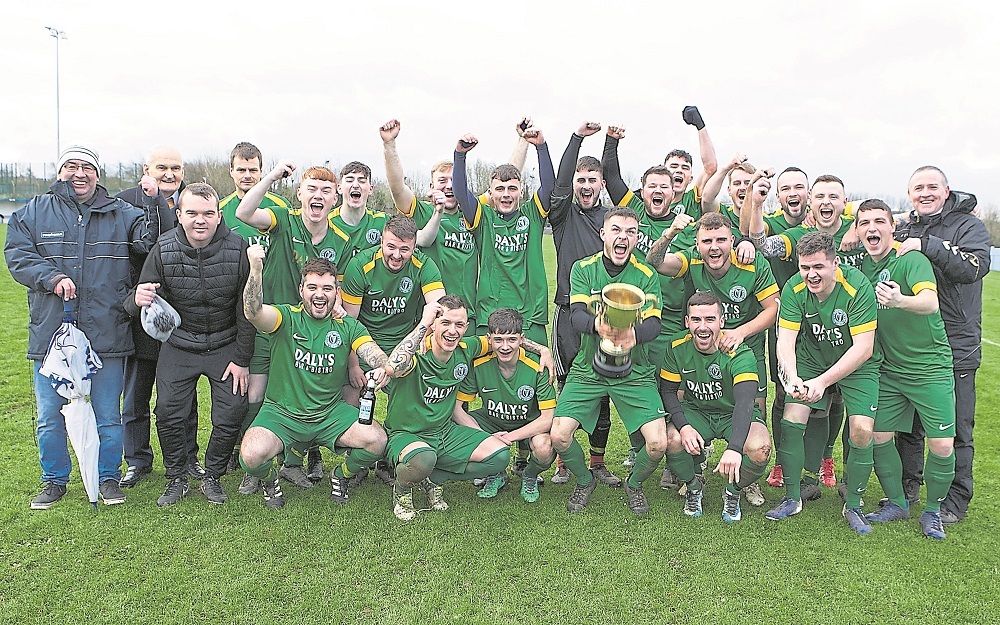 A sixty second period midway through the first half had a huge bearing on this game and it will be one which Villa in particular will reflect on in the aftermath of this cup final. It looked like Villa were back in it when Chris Montieth was found in space on the right and his low cross was perfect for Harkin who should have scored but his well-struck effort came back off the crossbar and Harps somehow survived.
That miss hurt even more when Harps immediately went down the other end of the pitch and doubled their lead. McCallion, a menace throughout, went clear on goal and dinked the ball over the goalkeeper – the ball hit the post and stayed out but Ryan Doherty was on hand to score the easiest of cup final goals to put clear daylight between the sides. Psychologically, those 60 seconds had a devastating effect on Villa, who barely looked like replying for the remainder of the half.

The half time break was just what Villa needed and they came out more determined, almost scoring when Hargan nodded down for Brown whose volley just cleared the upright. Both Hargan and Brown were superb throughout for Villa, neither giving up and both constantly driving their team on despite the circumstances.
The next goal in this cup final was massive and in bizarre circumstances it went to Foyle Harps, a corner into the Villa penalty area punched into his own net by Martin under pressure from several players, making it 3-0. It looked like there was no way back from there for Villa.
The next goal in this game was even more peculiar as Villa did pull one back, Quigley setting Harkin away down the right, and his lofted shot sailed into the air, with the officials signalling goal kick before the ball spun back out of the sky and landed in the net much to Beattie’s surprise in the Harps goal.
That sparked a mini-resurgence by Villa who almost scored again immediately, the impressive Quigg cutting in from the left and riving at goal with Beattie forced to tip over for a corner. Harkin then headed over from close range s cracks began to show in the Harps’ defence for the first time.
Villa got another boost when Harps’ midfielder Colm Paul Robb was red carded on 77 minutes. It was the correct decision by referee Damian Stewart with the Harps man not interested in the ball as he challenged an opponent.
Yet that moment of indiscipline only emboldened Harps, who finished this cup final off with a devastating display of finishing, with three goals in five minutes to end the game in style. The killer goal was disappointing from Villa’s point of view as aa simple kick down the middle of the pitch by goalkeeper Beattie was enough to send McCallion through and he fired home to make it 4-1 and end any hope of a Villa comeback. 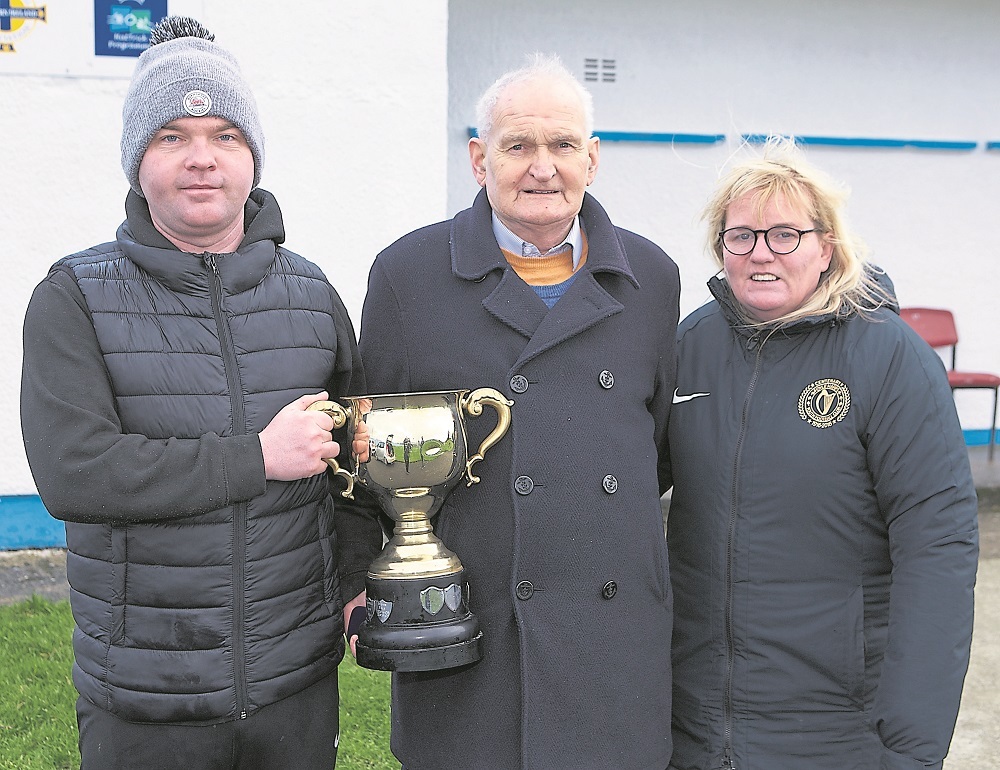 McCallion wasn’t finished there though and within two minutes he had scored again, showing Hargan a clean set of heels before expertly finishing past an exposed Martin.
Harps were loving life as they attacked again and this time McCallion set up McFadden, who lashed the ball into the net with what proved to be the last kick of the game as Harps finished off their day in rampant form, with Villa completely dazed after putting so much into the second half.