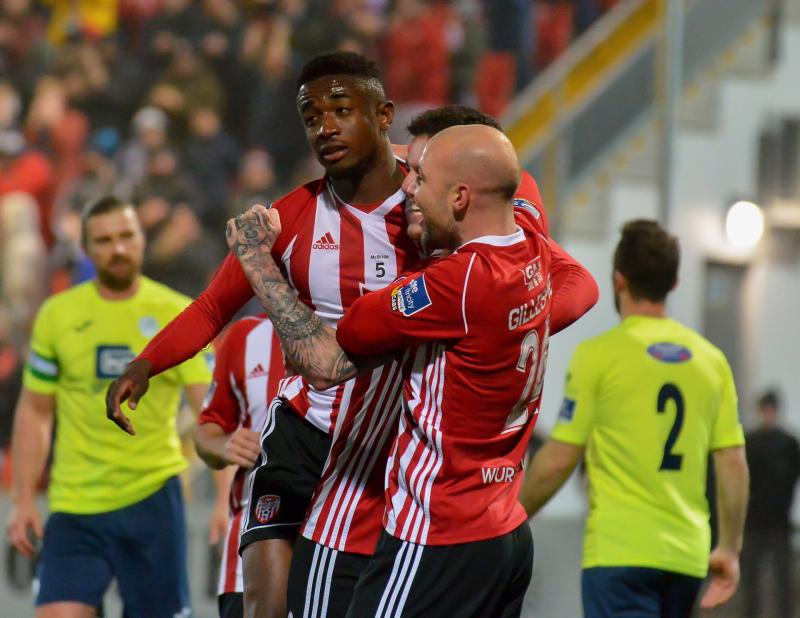 SUCCESS... Junior Ogedi-Uzokwe was a huge hit in his season with Derry City.

Junior Ogedi-Uzokwe has refused to rule out a return to Derry City after admitting that the club is 'like a second home' to him.
The 25-year-old returned to League Two side Colchester United after his loan spell at the Candystripes ended and he returned to England as the League of Ireland's Golden Boot winner, with 14 league goals and 16 goals overall.
The forward is currently on a break from football having played for 16 months straight without a break, during which time he will decide his future. With his Colchester contract up next summer, Junior is taking his time to work out his next move, especially given his unexpected success at the Brandywell.
“I'm still on a break but I've started a little gym programme so I'm hoping to be back around the end of December,” he explained.
“I definitely needed it. My body was in bits. You know how tough it is in the League of Ireland. Near the end I was struggling with knocks so it was nice to have a break. I've never had anything like that. I'm used to playing a season and having the break in the summer so it's weird to find myself not playing at this time of year, but it was needed.”
Returning to his parent club as the top scorer in Ireland has given Junior a strong base for negotiations in the coming weeks and months. Whilst reluctant to discuss his future at present, he did admit that he wouldn't rule out a return to Derry City.
“It helps me in a way but I still have got to go in and work hard and show what I can do and see what happens,” he continued.
“I feel good and obviously it has given me a lot of confidence going forward but I still feel good. I'm looking to see what happens in the future.
“I really enjoyed my time at Derry and the people were great with me, especially the fans, my team mates and the coaching staff, they were all so good to me so I could never rule out Derry.
“It's like a second home to me and it was really nice being there. I can't rule it out but I'm not sure what's going to happen.”

Unknown entity
Junior admits that the League of Ireland was an unknown entity to him this time last year but after huge success here, he admitted that he would recommend the league to any English player struggling to get a foothold in the English game.
“The way football is played there is very good and positive and I would recommend it to any youngster who is maybe looking to kickstart their career,” he stated.
“Maybe the league is a bit different here because of the football played, but the League of Ireland is a very good place to go and enjoy your football.
“I never knew what to expect,” he insisted. “In my head I just thought it would probably by physical and hard-working.,I didn't expect a lot of teams there to be ball playing or as technical as it was. It was a big surprise but I enjoyed it.
“Playing on the wing I learned a lot from that position, not just playing but scoring from that position as well. It taught me a lot and gave me a lot of confidence. It did a lot for me and it was a massive experience for me,”