City of Derry not out of danger just yet 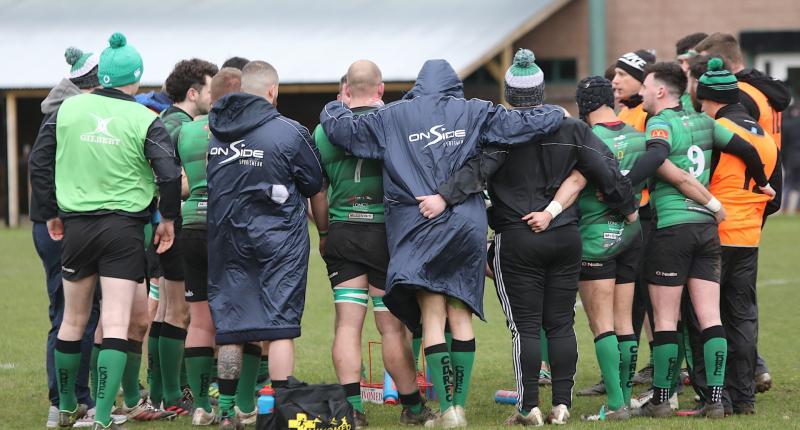 It will have to be a real team effort from City of Derry to stay in All-Ireland rugby in the next few weeks.

If ever City of Derry needed to find some consistency, then it is now as they head to Bangor this weekend knowing the wolves are right at the door at the bottom of Division 2C.

For the first time in recent memory, fortune was with Richard McCarter’s side last weekend, and just when they needed it most, as they went into their game against Bruff at Judges Road bottom of the division at taring at relegation to junior rugby.

That relegation still remain a threat, but all of a sudden things look much more positive following the thrilling come from behind victory over Bruff, which came courtesy of a last-gasp try from Darragh Gill.

That try earned not just a win, but a precious bonus point, and the cherry on top came with results elsewhere all going in Derry’s favour – Clonmel losing at Midleton and Sundays Well losing at Tullamore.

It takes Derry out of the bottom two, where they will stay if they can find that consistency in the remaining four games of the season. With Sundays Well up next at Judges Road in a few weeks, it is essential that McCarter’s team takes something from Bangor this weekend. It is all just so tight at the bottom.

“We can’t go to Bangor and throw it away,” McCarter agreed. “We have got to go up and get something out of that game. We’re more than capable of doing that but this was a building block and we have to see the final four or five matches as a mini league for us and if we win more than we lose we’ll stay up.

“I genuinely think if we had lost (vs. Bruff), we were dead and buried. That was our last chance saloon, a home game against a bottom four team and we had to win it. Confidence is a massive thing but you can’t just wake up on a Saturday morning and decide you’re going to be confident.

I hope that gives us confidence because we played some great stuff.”

City of Derry showed immense character in that game against Bruff, coming from behind at half time to lead in a must-win game, then absorbing the blow of an equalizing try with just five minutes remaining.

“It was a bit of a rollercoaster that’s for sure,” McCarter agreed. “I thought the referee was going to blow us out of it at a stage but to the boys’ credit – we asked them to be all in for 80 minutes and they were that and a lot more. We played some scintillating rugby at times, and defended for our lives and we thoroughly deserved the five points.”

That kind of spirit is what’s needed going forward, and was epitomised by Cathal Cregan getting off the plane from his honeymoon in Barbados on the morning of the game and heading straight to Judges Road.

“He flew in from Barbados at 7am and went straight on. It was unbelievable,” McCarter said. “It’s the character that you need. The commitment has been questioned a few times this year but you have boys like Caks who are coming off a plane and there wasn’t one ounce of not wanting to play. He was all in so hats off to him.”

It is all hands to the pump for City of Derry over the next few weeks, with McCarter hoping that last week’s win can be the catalyst for the team finishing a difficult year strongly.

“Not just for the season but for the future of the club,” he continued. “We don’t want to drop out of the All-Ireland, and that was a massive statement. We knew our backs were to the wall and we’ve said for the last three or four weeks that they were must win games but that was absolutely must win and the boys delivered so I was over the moon with that.

“It changes the dynamic and it was a big try at the end. A draw probably wasn’t enough for us there because we needed t win and to get the bonus point as well was the icing on the cake.

“Consistency is the key going forward and it’s what we’ve been craving all season, that and trying to build momentum so I hope that we can build on this and be consistent, get a good start next week and you just never know where that can take us.”