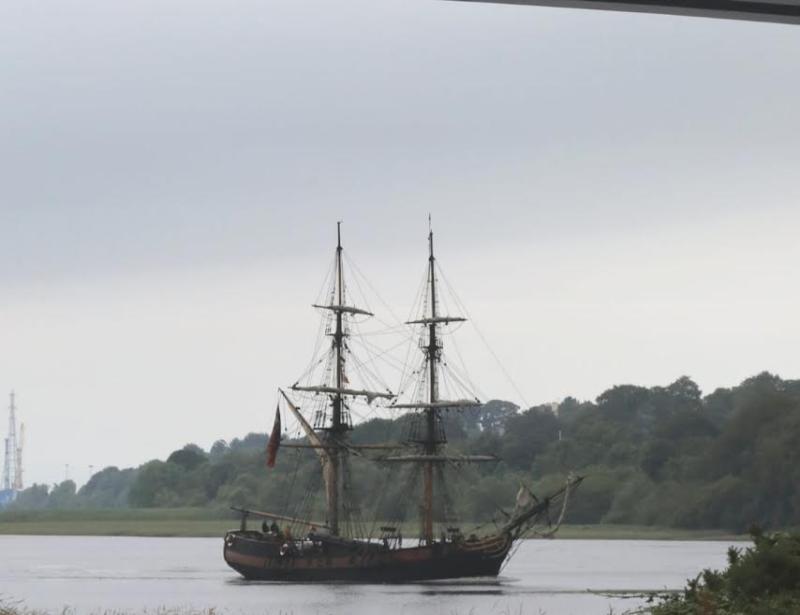 The Phoenix tall ship sailing under Foyle Bridge yesterday lunchtime on its way to joining the Clipper Round the World Yacht Race fleet on Derry's quayside. Photo: Tom Heaney, nwpresspics

The tall ship, Phoenix, has tied up alongside the Clipper Round the World Yacht Race fleet on Derry's quayside.

The ship, which arrived in Derry this luncthime, is sure to be a popular attraction during the Foyle Maritime Festival which begins tomorrow and runs until Sunday.

It will be joined tomorrow by the Leader and the Brocklebank tugboat and the Grace O'Malley tall ship at 3.00pm on Thursday.

Featuring 12 sails, the 112 foot long Phoenix has crew of ten

It was built by Hjorne & Jakobsen at Frederikshavn, Denmark in 1929, originally as an Evangelical Mission Schooner.

Twenty years later it retired from missionary work and carried cargo until its engine room was damaged by fire.

In 1974, it was bought by new owners who converted her into a Brigantine before being purchased by Square Sail in 1988. A first aid overhaul enabled it to sail back to the UK where she underwent a complete refit.

During 1991, it was converted to the 15th century Caravel Santa Maria for Ridley Scott's film 1492: Conquest of Paradise.

The ship was known as Santa Maria until, in 1996, due to increasing demand for period square-riggers, it was converted into a two-masted Brig and reverted to her original name Phoenix of Dell Quay.

The Phoenix was used as the ship Retribution in in the Hornblower Series 3.