Dominant Derry left to hold on 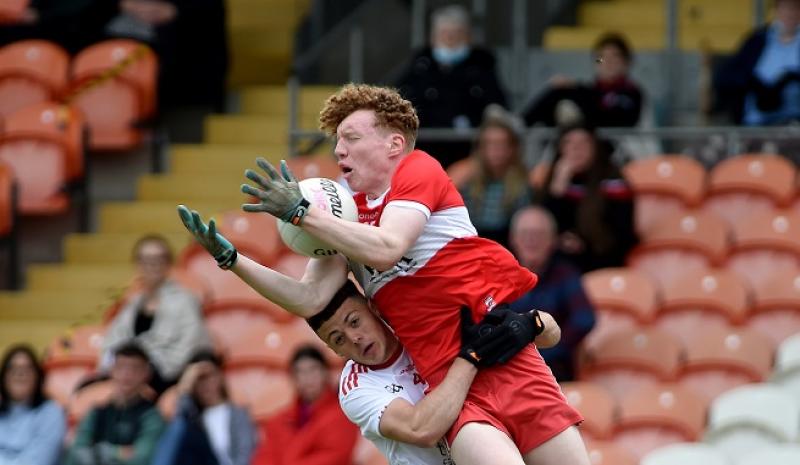 Derry had to survive a late scare on Saturday afternoon in Armagh to book their place in Friday's minor decider with Monaghan, the Oakleafers' fifth final in six years at this grade.

With Dan Higgins ruling the skies, Derry owned midfield, but 10 wides contributed to keeping a more economical Tyrone side within touching distance.

Tyrone had a chance to force extra-time, but Harry Morgan's injury  time '45' tailed to the left of the posts.

The Red Hands, with Conor Cush, Conor McGillion and Cormac Devlin prominent, settled well into the game and led 0-3 to 0-2 before Mathew Downey bagged the first goal of the game after 15 minutes.

Derry were able to keep their noses in front until a frantic end to the first half.

Tyrone won a first Derry kick-out of the game in the 25th minute and Ruairi Campbell's delightful pass played Devlin in for an equally sweet finish.

Derry responded with a goal in the next attack.  Eoin McEvoy was central and Niall O'Donnell slotted neatly to the net.

The Red Hands had the last say of the half with a  McGillion goal putting them 2-7 to 2-6 ahead at the break.

After an even spell after half-time, Tyrone kept their noses in front until a Matthew Downey nailed a 40th minute penalty to put Derry 3-9 to 2-11.

Martin Boyle's side only scored one point in the final 23 minutes of the game and were almost made to pay with Morgan's last kick of the game.