Mayor and Derry bishops are 'naturals' in debut film roles 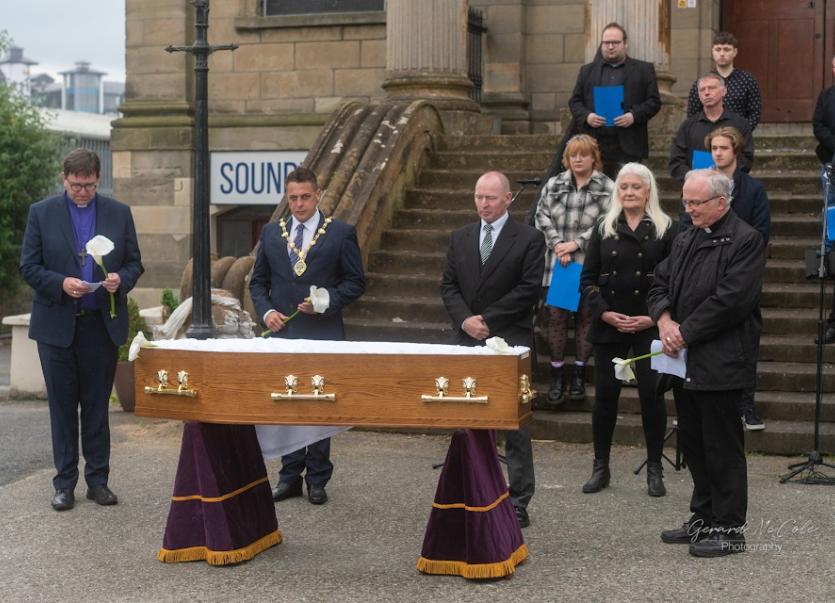 Mayor Graham Warke with Bishops Donal McKeown and Andrew Forster pictured during the 'Grief' funeral scene shot in the grounds of the former Presbyterian church on Great James Street. Included are Jos

There were emotional scenes in Derry city centre at the weekend during filming for a short movie dealing with the tragic loss of the Covid-19 pandemic.
A poignant funeral scene took place in the grounds of the former Presbyterian church on Great James Street on Sunday as part of Black North Production’s short film, 'Grief.
The scene featured Bishop of Derry, Donal McKeown, Church of Ireland Bishop of Derry, Andrew Foster, and Alderman Graham Warke, Mayor of Derry City and Strabane District Council.
All three delivered heartfelt words relating to the devastation the virus has caused and the ongoing effects still being felt be so many people.
There was complete silence as members of Exiles RC and Centurions motor cycle clubs, carried the symbolic coffin from the hearse.
Tieghan Doherty delivered a beautiful and angelic rendition 'Pie Jesu' (from Andrew Lloyd Webber's award-winning Requiem Mass) that was highly praised by everyone and add greatly to the serenity felt by all present.
Director, producer and writer, Joseph MacCarthy, founder of Black North Productions, paid tribute to the bishops and the Mayor.
He said: “Nothing was rehearsed beforehand, Bishop Forster, Bishop McKeown and Mayor Warke all came across as sincere, emotional and completely genuine.“
He added: “Given that Teighan had only two days to familiarise herself with the hymn, her delivery was perfect. The choir sang several other hymns ably conducted by Marie Humphreys, who also had very limited time to prepare a choir that only got to practice on four occasions due to the Covid-19 restrictions.”
'UNSUSUAL FILM'
Joseph added: “Grief is an unusual film in that Bishop Forster, Bishop McKeown and Mayor Warke play themselves, as do the bikers.
“The young cast intend to deliver a letter of proposal to Mayor Warke on completion of the film.
“Not only does the film represent the whole city’s sense of loss, but indeed the deep sense of loss felt across the whole island.
“The fact that a concrete proposal to Derry and Strabane City Council will be delivered in the final shoot, highlights the sincerity felt by the whole cast and Black North Productions.
“I would like to thank everyone who supported their city centre shoot in any way and made it such a huge success, especially Charles from Bradley & McLaughlin Undertakers.
“To put it in the words of member of the public who watched events unfold on Sunday, 'this was something very special to witness and so many people will relate to it, I know I did.'
He concluded: “Grief has brought together the whole city at a time when political divisions are making the headlines.
“Perhaps it takes a sincere film to shown unity or purpose and bring people together with a shared vision
Mayor Warke said it was a 'huge honour' to be invited to be part in the film, stressing he agreed to take part as he felt it was hugely important to hear the devastating impact Covid-19 has had on the many lives of people across the city and district and wider North West region who have lost a relative or friend as a result of the virus.
He added: “Covid-19 has had an enormous impact on all our lives, it has caused so much heartache and loss and I am delighted that this local production company have attempted to reflect the impact of that loss in this short movie Grief.
“I genuinely hope the film will give the public an insight into some of the personal stories behind the pandemic as well as allow those taking part to share their experiences and grief so they can find some comfort and support as they learn to cope with their loss.”
Bishop McKeown said he hoped the film would help people 'reflect on what has been lost' and face future challenges together.
He said: “I haven’t seen anything of what the film will look like.
“I was happy to be invited to take part in its production with Bishop Andrew Forster and the Mayor Alderman Graham Warke.
“This city has a great sense of solidarity especially in times of difficulty. It also has a rich tradition of artistic creativity using many different media.
“I hope that this film will help people reflect on what has been lost and how we can face the challenges of the future together, letting the deceased go in peace and finding our own peace at their passing.”
Bishop Forster said he was 'grateful' for the opportunity to appear in the film.
“The coronavirus has exacted an enormous toll, and our joint appear- ance  was  a collective acknowledgement of the pain that has been felt right across our com- munity.
“I continue to pray for all those who have lost loved ones and are griev- ing, and those living with the effects of Long COVID. I thank God for the selflessness of our health service workers and the ingenuity of our scientists“.
Concluding, Bishop Forster said: “I pray, too, for the success of the vaccine roll-out at home, and a more equitable distribution  of vaccines  around the globe.”