Derry at war in battle for detox centre

Aontu Councillor Emmet Doyle argues the case for such a facility 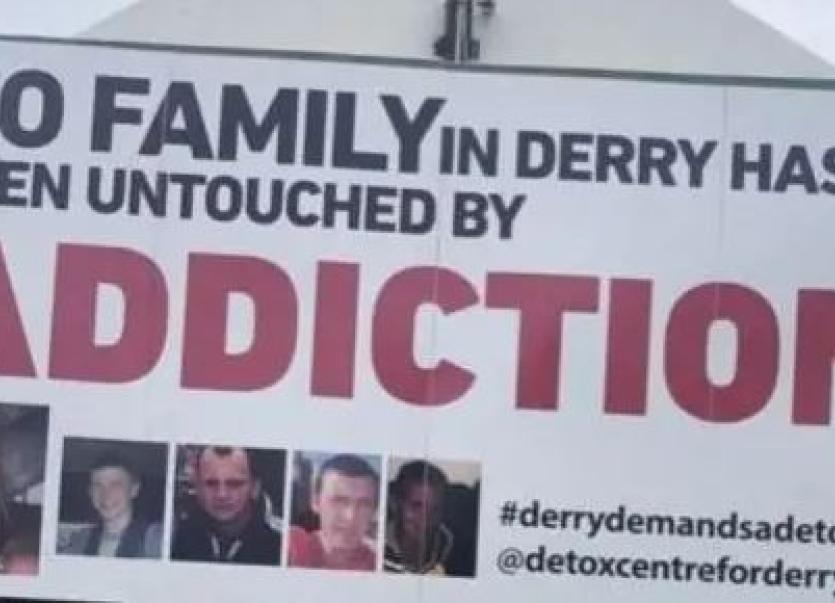 Following the recovery of the body of young Derry man Andrew Quigley from the River Foyle in 2014, his family launched a campaign to get a detox centre for the city after it emerged he had sought and failed to get help with his drug and alcohol addictions. Today, over eight years later, local woman Tamzin White has rekindled the campaign after her mother Louise lost her battle - at the age of just 40 - to alcohol and drug addiction in January this year. Tamzin believes if a detox centre had been available her mother would be still alive. With deaths due to drugs continuing at a worrying rate in the city, which has the second highest rate in the North for alcohol-related deaths, local Aontu councillor Emmet Doyle argues the case for such a facility for the city

Derry is at war. We often can’t see our enemy, it hides within our homes, our families and it's often as a result of something else. It is addiction.

There are those who are holding back the tide of this scourge with their bare hands – community groups, counsellors and health professionals. We have many fantastic services to offer support for addicts and their families both in the community and in the health service, but the need for a Tier 4 detox centre is now, and has been for some time, obvious.

The current campaign run by Tamzin White isn’t geared towards somehow stealing the provision of the Asha Centre in Omagh, but the evidence we have of need right here at home can’t be ignored – though some are trying very hard to do just that.

Over a third of all of the users of the detox service in Omagh in recent years have been from Derry and Strabane. When we look at the other centres in the east, neither of them share the same profile of users and there is no obvious one centre of population that are using the services.

The number of people who present and are admitted to Altnagelvin Hospital due to alcohol and drugs misuse is rising, and Grangewood in-patient mental health unit is continually operating at the height of its capacity.

When I presented a motion to council that we declare a mental health emergency in the district, there was opposition – some felt the word ‘emergency’ was too strong. The signs that we are in an emergency don’t just manifest themselves in statistics.

You’ll have been hard-pressed not to notice groups like the Foyle Prevention Team walking the riverside night after night in their reflective gear. They are all volunteers who have seen how mental health and addiction reach an apex in areas around the river and taken it upon themselves to do something. Without Foyle Search and Rescue and groups like FPT, more lives would be lost to the Foyle.

That is what an emergency requires – selfless leadership.

It is that kind of leadership that the Quigley family provided, that Tamzin White now provides that deserves nothing less than all of our support to deliver a detox centre. Up to now, the campaign has done everything you would expect; we’ve gathered the stats I referred to, we’ve secured the support of parties across council, we’ve met with health officials, written letter after letter to decision makers, we’ve even sat down with the Health Minister.

The New Decade, New Approach agreement specifically referred to a detox facility in Derry, and it has to be delivered upon. It is as important as many other commitments in that document and it is a weapon for this war that we cannot do without.

The journey for those with alcohol or drug addiction is fraught with difficulties. It can take many years for people or their families to be read to reach out for help to the health service, usually through their GP.

They’ll be assessed and can be referred depending on their needs to the community detox nurses. There are only two in the Western Health and Social Care Trust area. Should they need a higher stage of care they can avail for example of a number of beds in Damian House – but only if you are a man. Women have access to this level of support only in premises in Omagh.

It is only when we get to Tier 4 – where you need to attend a specific unit as an in-patient, that there are no services in Derry. You are required to undertake that journey to Omagh, which from many of the survivors I have spoken to, is hard enough in itself.

People often instead wish to go to a facility in Newry in a different care pathway than Omagh, and we don’t know how many people have made that journey.

We cannot – we should not, settle for less. When stakeholders called for a cancer centre in Derry they were told that Belfast was only a run up the road. It wasn’t good enough then and it is not good enough then. They pushed on, and the difference to patients’ lives have been tremendous. The detox centre is next.

The only way we can deliver this project is via people power – it is the one tactic we in Derry have no problem in utilising.

Be under no illusion – there are those sitting in offices in Belfast and in Derry who do not want to deliver this provision. They want us to tell people about the services that are available which is fine, but when it comes to a detox centre, Omagh is fine and they see no problem with patients having to travel.

That is not good enough. The days of second – even third class status for the people of this city in relation to services they pay for is over.