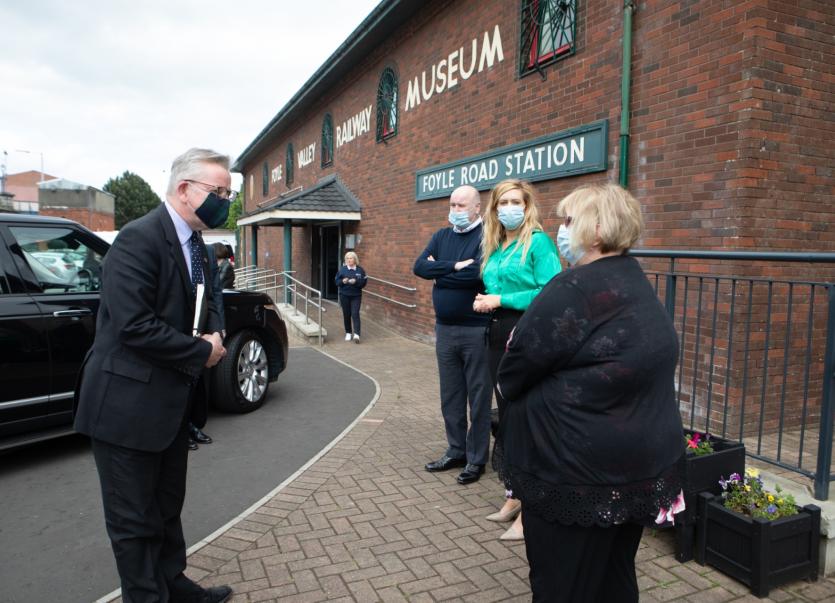 A prominent member of the British Government has been made aware of Derry’s unique levels of deprivation and urged to provide funding during a surprise visit to the city.

Michael Gove took the opportunity to call at local charity Destined at its North West Learning Disability Centre on Foyle Road on his way to fly back to London from City of Derry Airport after attending the Irish-British Council meeting in Enniskillen on Friday.

Established in August 2002, Destined, which also has a centre in Feeny village in Co Derry, is a voluntary charitable organisation which seeks to address the needs of people with learning disabilities.

Empowering people with learning disabilities and promoting social inclusion, Destined has as its core ethos the involvement and full participation of its members in all aspects of activity and at all levels of the decision-making process.

During the visit, Dermot O'Hara, chief executive of Destined, made Mr Gove aware of a unique cocktail of problems facing Derry, including deprivation and rising mental health issues.

The Minister was informed that the centre was damaged in an arson attack last year and receives very little funding.

He urged Mr Gove to recognise the difficulties facing the city as it emerges from the Covid-19 pandemic and called on the British Government to make a ‘one off contribution to get us over this hill.'

She took the opportunity to point out that Derry had the highest unemployment rate and some of the most deprived wards – the council area features in five of the top ten most deprived areas in the entire country.

“People are having to choose between eat or heat,” she said.

Most people with learning disabilities or autism are in receipt of Personal Independence Payment  (PIP).

She asked Mr Gove why these individuals were being reassessed whenever they were lifelong disorders.

She added: “The duration of the award is a huge problem, how can claimants with learning disabilities receive an award that needs to be reviewed in two years?

“It is a serious waste of departmental time because these are lifelong conditions.”

While acknowledging that Universal Credit aims to get people back in to work, Ms Burke said it was nowhere near enough to live on, adding: “There is not enough work for people in this area.

“It needs to be addressed. Social welfare reform is failing to deliver.

“We are extremely reluctant to put someone on Universal Credit because of the five week waiting period.

“They have to borrow money and a deduction is made after the first payment.”

In response, Mr Gove accepted that people were having to turn to payday loans or ‘unscrupulous’ lenders.

He said the British Government was aware of problems and was trying to make the process ‘less traumatic’.

Charles Lamberton, of Triax Neighbourhood Partnership, raised the issue of Brexit and how it would impact on local com- munities.

He said PEACE funding and the European Social Fund targeted the most deprived areas and without them, places like Derry would suffer additional hardship.

Mr Gove said the British Government would be replacing these funding pots with ‘at least the same amount of money.’

Mr Lamberton questioned that assertion, saying ‘we are a lead partner on the ESF programme’ and the funding being offered was ‘nowhere near the same amount of money.’

He added that City Deal monies were about skills and said the British Government should compensate Derry for what it would lose through EU funding.

Assurances were given by Mr Gove that ‘specific funding’ would be examined ‘to ensure that no damage is done as a result of the transition’ with ‘new funds to take up slack in other areas.’

Explaining the difference Destined made to their lives, service users, including Roisin Doherty and Carmen McCallion, told Mr Gove that moving to a bigger facility had been ‘amazing.’

To round off the visit, service users gave Mr Gove a guided tour of Destined's facilities and the adjacent Foyle Valley Railway Museum.