Visitors given a chance to hear poet's voice at the sites 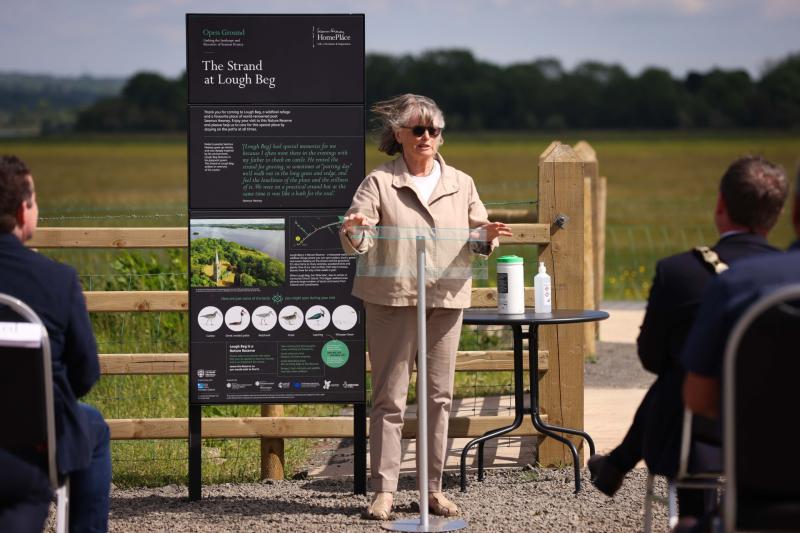 Marie Heaney has officially launched a new outdoor visitor experience which for the first time brings her husband Seamus Heaney’s literature into the landscape of South Derry which so inspired him.

Seamus Heaney HomePlace ‘Open Ground’ is a series of five locations, all of which held a significance for the poet, from the Strand at Lough Beg to the banks of the Moyola River.

Seamus Heaney’s poetry is not only visible in each place where interpretation panels explain the literary connections, but also audible with the poet’s own voice heard via listening posts on site, as well as via a dedicated Open Ground App, with elements of augmented reality adding a new dimension to the experience.

Open Ground has been developed by Mid Ulster District Council which manages Seamus Heaney HomePlace, with funding from DAERA, and represents an overall investment of £750K.

The Strand at Lough Beg, a place of ‘special memories’ for Seamus Heaney, has been made accessible to visitors for the first time.

A newly constructed boardwalk leads to a woodland pathway which gently opens out into a clearing with uninterrupted views across Lough Beg to ‘Church Island and its soft outline of yew’.

A riverside walk along the Moyola River, where Seamus Heaney walked, fished and thought, is now also more accessible to visitors who can meander alongside those same river banks, retracing the steps of the poet who was ‘at home on the water in all sorts of ways’.

Sculpture is at the heart of the remaining three locations, with a tall, steel structure at the Eelworks in Toome, symbolising the twists and turns of eels as they swim, and reflecting the poet’s fascination with both the lifecycle of eels and the fishermen who trapped them.

An alleyway in Magherafelt is now home to the sculpted silhouettes of people walking towards the town’s bus station which featured in Heaney’s poetry, with the ‘agitated rooks’ from ‘Route 110’, the poem which takes its title from the number of a local bus, flying just above their heads.

The existing Turfman sculpture in Bellaghy has benefited from an extended and freshly landscaped seating area, creating a new space for visitors to contemplate both the art piece and lines from ‘Digging’, one of Seamus Heaney’s most well-known poems.

Speaking at the launch, Chair of the Council, Councillor Cathal Mallaghan, said: “This is a truly unique development which brings Seamus Heaney’s poetry alive in the places which were so much a part of his formative years and had such an influence on the body of work which brought him literature’s highest accolade – the Nobel Prize.

“If you read Seamus Heaney’s speech from the day on which he became a Nobel Laureate, you will be left in no doubt about his roots being in South Derry and their significance on his journey from his home in the ‘traditional thatched farmstead’ to the stage on Stockholm.

“I consider it an honour to be launching Open Ground and to celebrate further the man, his work and his deep connections to this area”.

Chris Heaney, speaking on behalf of the Heaney family, said: "The names of the locations that make up this particular open ground - Bellaghy, Magherafelt, Toome, Moyola, Lough Beg - are familiar to people from this locale but they have also become familiar to readers of my father's poetry throughout the world. The development of five sites linked to different poems was a great idea from the start and there is something special and genuinely powerful hearing the poems read in their own “home places”.

Director of Rural Affairs at DAERA, Paul Donnelly said: “Tourism has the potential to create jobs and opportunities for our rural communities and economy and I am delighted that we have invested £471k from our Rural Tourism Scheme into the Heaney Open Ground Experience.

"This project will highlight the literacy significance of the sites in the life story of Seamus Heaney and in doing so will hopefully attract more people to visit the area and stay longer.”