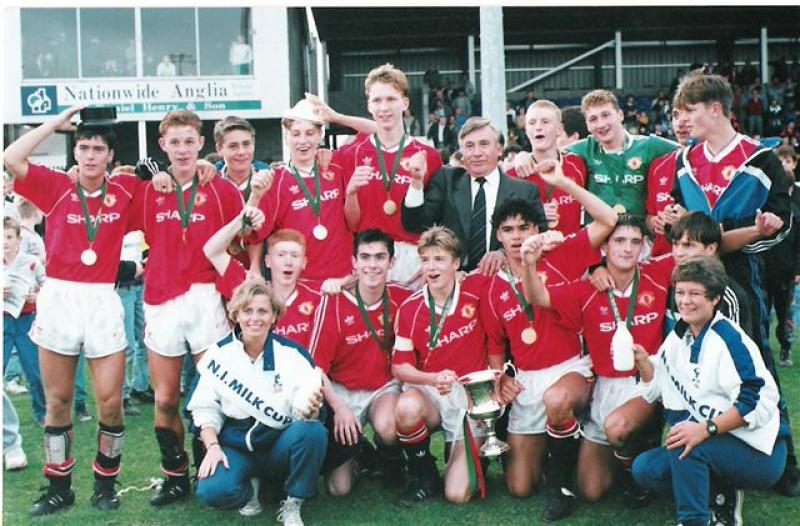 The Man United team that won the Milk Cup in 1991.

Thirty years after some of Manchester United’s most famous sons secured their first piece of silverware, today’s Old Trafford’s brightest prospects will be descending upon Northern Ireland in July to take on some of Northern Ireland’s best.

In the summer of 1991, Manchester United took top spot in the Milk Cup U16 section, defeating Heart of Midlothian in the decider at the Coleraine Showgrounds.

Most of those players became part of the United team, which became known as the Class of ’92 and went on to achieve so much success in those famous red jerseys.

To mark the 30th anniversary of that fantastic night, some of Manchester United’s best young talent will play in three games against local Northern Ireland opposition between 26-30th July.

Tournament chairperson Victor Leonard said they were delighted to receive Manchester United’s acceptance of the invitation confirming that these three games would take place.

“Manchester United were very keen to come over and support a competition which has provided them with a springboard for so many of their first team stars from David Beckham and the Nevilles right the way through to Marcus Rashford and Mason Greenwood.”

Victor Leonard said: “We are grateful to the three local Authorities, whose support in 2020 and 2021 ensures the future of the Tournament, which plays such a massive role in the sporting and tourism success, not only in those local areas but the whole of Northern Ireland.”

As COVID-19 restrictions are being eased, organisers are hopeful that spectators will be in attendance at all three games.

“We will work closely with each of the respective councils, the Public Health Agency and the Department of Health, to ensure that all covid regulations, current guidance and protocols are observed” added Victor Leonard.

“Over the coming weeks we will provide more information on each of the games including venues and kick off times and we are very much looking forward to welcome Manchester United to Northern Ireland towards the end of July.”