Better discipline will stand to us: Kelly 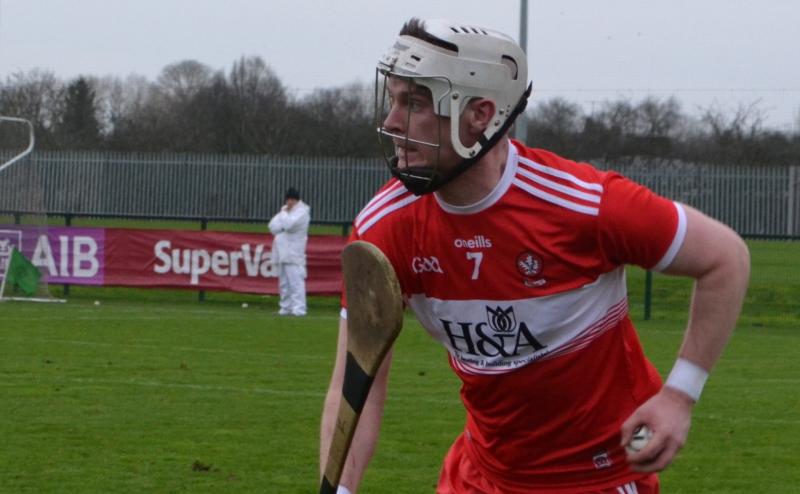 Conor Kelly has been named as vice-captain of the Derry senior hurling team.

A more disciplined approach in defence will play a huge part if Derry are to put the last two seasons behind them and gain promotion to Division 2A for the first time since 2016. That's how Conor Kelly sees it.

The Kevin Lynch's man made his debut in the first game of the 2019 season, a 1-15 to 0-14 win over Down in Páirc Esler. Now, in this third season, he has been appointed vice-captain.

“It is something I am fairly proud of and I am proud to represent Derry,” said Conor, who joins younger brother Sean, as one of five sets of brothers on the squad.

Older brother Paddy, is one of 11 from last year's squad not back on board for the 2021 season, while younger brother Sean was an ever-present between the posts under John McEvoy.

“It is a good opportunity to progress as a player, hopefully with Cormac (O'Doherty) we can push on and lead Derry to greater things,” Conor added.

Conor played all but one game during John McEvoy's two-year tenure as manager after being forced off with an injury in the early stages of a Christy Ring clash with Down in Ballycran.

Last season, he scored 0-6 from corner back including a late equaliser against Kildare at Celtic Park.

With the new sin-bin coming into hurling, it is something the defender is aware of and confesses at being 'caught out' with a few head high tackles in training.

“Cormac (Donnelly) has been very good and puts discipline into the defenders. That's what you are going to need if you are to win games,” Kelly points out.

“Teams are not killing us from play, I would say it is frees that are letting us down in terms of conceding scores...a better discipline will stand to us.”

Speaking at last week's media evening, before training, the Lynch's man spoke of how keen players were to get back playing games. Training is one thing, but cranking it up when it matters, that's what it is all about.

“There is a hunger and boys are looking sharp at the minute,” he adds. ”We are really looking forward to the league. Mayo and Kildare are two massive games at the start, we'll be taking nothing for granted.”

In the last two seasons, Derry have started the season well, but ended up empty-handed.

“You have to earn your win and we've learned the hard way in the last couple of years. Winning league games meant nothing, you have to turn up on the final day and finish the job,” Kelly stated of their league final defeats.

“Hopefully this year, with the players and the talent, that we can go one step further this year. It is easy talking in hindsight, if we'd played Down the following weekend, the momentum would've carried us.

In football, it was Kelly's late point that landed the U21 championship last season and with Covid-19, they didn't get to compete in the Ulster championship in Creggan.

On the hurling front, Kevin Lynch's had a successful run through underage under Kevin Hinphey, (pictured right) who has joined the Derry management team as a selector.

“Growing up, he was but he was the first person to put a hurl in my hand, you are talking from U8s all the way up and even in school, the odd time with (St Patrick's) Maghera.

“With Derry underage teams, then with Kevin Lynch's minors he was looking after our teams. I was playing with him (at senior level) for a few years. It is weird this year not being playing alongside him, but he is there pushing you on.

“He has a great knowledge of hurling and you can always take advice off someone who has played at that level.”

“The man has umpteen championship medals, if there is a man telling you how to do it, he is the man. Sometimes we might not have seen eye to eye, but he only wants the best for you and he drives you on to be the best.”

Kelly is happy with the new management setup and sees the benefit of a change and new faces.

“At the minute everyone is gelling well. There are new drills, new coaches and everything brings more motivation,” he said.

“Sometimes boys can get comfortable with managers, but at the minute I am enjoying the change.”

After two seasons of missing out on promotion, in Kelly's opinion, it doesn't add to the pressure to deliver this year. It's the fuel to motivate their 2021 challenge that opens up before them.

“Being there twice and losing twice is not easy, but this year we can use that as motivation to go a bit further.”

With promotion missed, the motivation dwindled ahead of the Christy Ring Cup.

“Personally, I am not looking much further than the league. It is something I want to give a good crack at it,” Conor adds of this season's focus.

He is happy with the panel and the new faces brought in by the management team.

“If you want to progress and get Derry hurling to where it needs to be, you need the best in the county. I feel this is the strongest panel of players that we have had. Boys are putting their hands up and that's what you need, competition for places.”