'Summerland' is out in cinemas now.

A County Derry schoolgirl has arrived on the big screen after landing a role in the recently released wartime drama, Summerland.

Aoibhine McFlynn, from Ballyronan, was chosen for the role of ‘Cassie’ in the film, which was produced in East Susseux, England and released in cinemas on July 31.

The plot follows a reclusive writer who forms a relationship with a young London evacuee named Frank after adopting him during World War Two.

“She enjoyed it. She says she wants to do more and that’s what she wants to get into. Hopefully, on the back of this, something else might pop up,” she told the County Derry Post.

“I don’t think people thought it was going to be such a big movie. Aoibhine got into it through Alison Campbell models, who put her in for it. 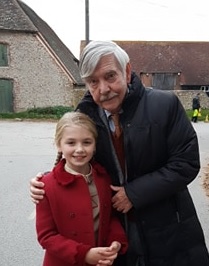 “They flew us over and set us up for four or five nights. The crew and all had been filming for about six weeks, so we were over on the second last week for her scene.

“Her role is ‘Cassie’, an evacuee child. It’s a small role, but she features three or four times, so we’ll have to go to the cinema and see her.”

Despite her new-found fame, mum Edele says the 11-year-old has remained grounded after initially filming the scenes almost two years ago.

“She’s actually a shy wee thing, a very modest wee girl. She wouldn’t tell anybody that she’s in anything,” she said.

“We obviously had to get confirmation from school to let her go, so before she left, Mr Scullion at the Loup called her up in front of everyone and I think she nearly died!

“She’s just taken it in her stride. She was a bit younger when we went and did it and it was amazing to see the whole set up and how it was all done.” 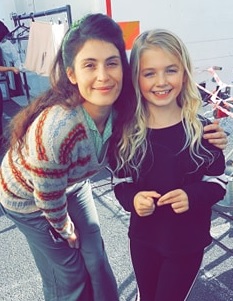 Aoibhine’s family are hoping to get together over the next few weeks to watch her on screen, but in the meantime, cinema goers may unknowingly find themselves sharing a room with a film star.

“I’ll make them all aware, I’ll roar at the screen,” said Edele, who was planning on visiting the cinema at the weekend with Aoibhine and her husband, Shane.

“We might be able to get it here streaming with the family next weekend, if we don’t get to the cinema.”

Edele says Aoibhine, who also features on a current Phoenix Gas television advertisement, didn’t have to abandon her Loughshore tone for the role.

“They wanted the Northern Irish accent, so she didn’t have to change it or anything.”

Summerland is in cinemas now and can also be streamed on Amazon Prime Video.